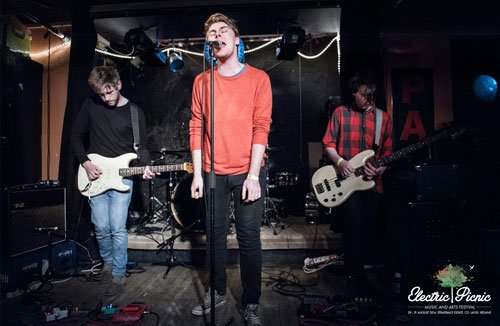 Dublin’s Girl Band have proven to be one of the most exciting bands to emerge from our shores of late, with a steady stream of quality releases and decidedly tasty live performances already under their belt, 2014 looks set be their best yet. The Dublin four-piece released two of the best home-grown tracks of the year in ‘Lawman’ and ‘De Bom Bom’. They are two stunning examples of what Girl Band have in their arsenal – characteristically loud and breathless masses of angry, brutal and ugly vented anger – in a good way of course. ‘Lawman’ saw them prove their mastery in the way of scraping, dissonant noise-punk with this sprawling 6-minute plus industrial stomp of gut-wrenching and desolate post-punk rock. It was followed by an abrasive three minute monster called ‘De Bom Bom’. Do not be deceived by the jovial title, ‘De Bom Bom’ is gruesomely intense. It is an agitated coming together of rattling guitars, fuzzed up bass and frenetic drumming, which are angrily spat over by Kiely’s screeching vocal, basking in the glorious industrial rhythm. Girl Band have rarely been anything but exhilarating, in the flesh or on record, and ‘Lawman’ and ‘De Bom Bom’ are in keeping with tradition and provide two clear examples of why now is the best possible time to see Girl Band live.

Barry is a music blogger, sometimes promoter, and journalist & tries his hardest to be a barman. He runs BarryGruff Music Blog (http://barrygruff.wordpress.com/) and a regular series of 'BarryGruff' music events in conjunction with his blog. In his spare time hes generally giving out about stuff and infuriated by Wrexham AFC. Hes also got a BA in History & Media Studies & an MA in International Journalism for his sins.

The Resignation of Mabel Maghee

THE PLAYLIST #19 | The Saint David’s Day Massacre: A Celebration of Welsh Music