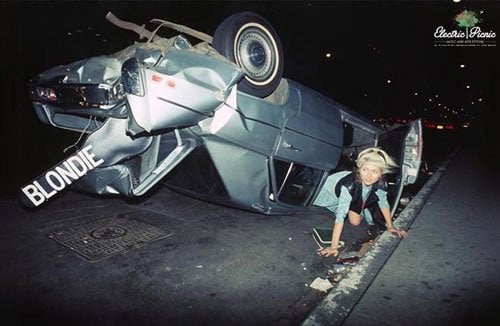 It’s 1976 and Blondie are travelling back from a recording in Rockefeller Centre Studios in New York City, with then unknown rock n roll photographer Bob Gruen in tow. On the corner of 6th Avenue and 50th Street they come across the wreck of a car, turned over on its roof, doors open, windows smashed and the back bumper twisted out of shape. Chris Stein, founding member and guitarist with the band, asks the driver to slow down and eventually stop and Bob Gruen gets out to take a photograph, as you do when you’re a photographer. As Gruen is busy snapping the totalled car, Debbie Harry, Blondie’s lead singer, grabs one of the groups guitar cases, emblazoned with the word Blondie on the neck and shoves it into the twisted boot, half in and half out so that the name of the group is visible. Gruen stops for a moment, watching her as she walks over to the open driver’s door and proceeds to mess up her hair and then get down on her hands and knees, like she is crawling out of the wreckage of her car. He takes one photograph of Harry posing and then they take off, leaving the car wreck, but not the guitar, behind them. Gruen, when asked recently, said that this, along with the iconic image of John Lennon wearing the sleeveless New York City t-shirt, are the two images he is most proud of, and most asked about. Two spur of the moment shots.

And that’s Blondie for you. Spur of the moment. Unplanned. Energetic. Wild. Thank jaysus!

Blondie emerged on the New York music scene in the mid 1970’s with Debbie Harry, herself a former Playboy Bunny, fronting as the lead singer. They weren’t just from New York, they were New York (Noo Yawkers to the core) and it really showed in their music, an eclectic mixing of punk, pop, rock and reggae into something quite unique. Soon they found themselves filling the gap left after the decline of glam and glitter rock. Staying mainly underground, making a name for their energetic, bold and irreverent live sets in New York’s famous Max’s Kansas City club scene, Blondie quickly rose to the top of the new wave movement. Their first album, simply titled Blondie, released in 1976, did less than spectacular figures but was well reviewed and provided Blondie with one of their first anthemic fan favourites – X Offender. Neal Barlowe, a music journalist for High Times magazine wrote about Blondie’s debut “…this could be the disc that takes ‘punk rock’ into the nooks and crannies of the nation.” While Blondie didn’t make the world sit up and take notice, commercial success wasn’t far away. Their second album, Plastic Letters, broke Blondie to U.K. and Australian markets in 1977 and global domination soon followed the release of their third album, Parallel Lines in 1978. So evolved their sound, embracing disco and rap and the No. 1 spot around the world but, as in so many cases, success wasn’t an easy burden to bear and in 1982 the group disbanded. If that had been the end of Blondie then they would have left the world with some of the most accomplished pop/rock/punk (pronk, anyone?) songs ever recorded (Denis, Call Me, Heart of Glass, The Tide is High, One Way or Another, Atomic, X Offender, Hanging on the Telephone and Sunday Girl), all within the short space of seven years. Like Dr. Eldon Tyrell tells Roy Batty in Blade Runner – the light that burns twice as bright burns half as long – and you have burned so very, very brightly. But Blondie weren’t done. They reformed 15 years later, with the No. 1 single Maria and are still going strong today.

Okay, biography over, lets get down to it – I’ve been a fan of Blondie for years, since I was a kid actually. The Sunday ritual in my house as a child went as follows: Mass (usually 10.30 am) dinner (usually 1pm) and then a drive for about four hours around the rolling Wexford countryside. Four hours is a lot of time and it had to be filled with music, singing, debates about whether Magnum PI’s moustache was cooler than McGyver’s mullet, and the odd row about should we go left, right or straight on. This is where I found out about Dire Straits and Bruce Springsteen, Fleetwood Mac and Kris Kristofferson, The Rolling Stones and Blondie, as my Dad would spend the week taping songs from the radio just for these Sunday excursions. One such Sunday we (we being my parents, my sister and my good self) were practically lost somewhere along the Wexford/Carlow border when my Dad pops a fresh cassette into the tape player and the first song on Side A (teenagers these days just don’t understand that when it came to tapes you had to turn it over to hear the full album) was ‘Denis’ – “Oh Denis doo be do, I’m in love with you”. Yup, though I had never even seen her face, Debbie Harry became my first crush.

Call Blondie what you like but there are a few things that they are not – those being ‘boring’, ‘unadventurous’ and ‘safe’. In six albums, across seven years Blondie flitted between punk, rock, rap, pop, disco and reggae (sometimes all at the one time). It was this versatility that kept them fresh and undefined but what made people love them was the band’s personality, their irreverent and cheeky stage presence, the driving drum beats, the jaunty guitar playing and the pouty vocals from Harry – all of which are still in place. Like most of the punk bands that popularised the new wave era, Blondie were fearless but unlike most of their punk peers, Blondie evolved and grew out of their punk roots (don’t we all). ‘Denis’, my personal favourite Blondie track, is a great example of this. ‘Denis’ was first a hit in 1963 by a group called Randy and the Rainbows (make of that what you will) but it was originally called ‘Denise’. Harry took it, rearranged the song, changed its gender and stripped out the formulaic 1960’s pop and Barber-shop Quartet sound that popularised the original, instead inserting Clem Burke’s driving drumbeats, transforming it into a 2 minute piece of pop magic. But that wasn’t enough – Harry sang half the song in French. No one knows why, Harry just thought it sounded good – and boy was she right. What makes it more impressive is that ‘Denis’, a pure pop record, came from what was then New York’s most prominent punk band. No one was going to shoehorn Blondie into a genre. And no one was going to tell Blondie what was right, wrong or expected of them.

Blondie had it all, melody, style, energy, some great tunes and sex appeal. And few bands had a Debbie Harry. While their break-up in 1982 was directly down to the fact that Harry was becoming bigger than the band, they would have been nothing without her – would we have a Lady Gaga without Debbie Harry? Or a Madonna? Or a Gwen Stefani? Caroline Sullivan, a music journalist with The Guardian said, of Blondie’s reunion in the late 90’s, “If nothing else, it will prove the debt owed Debbie Harry by every female singer of consequence except Celine Dion.” Think that about says it all really. Debbie Harry stands among the great female stars of rock music – the Patti Smith, Joan Jett, Pat Benatar, Chrissie Hinds and Stevie Nicks’s of this world but Blondie, for me, are one of the bands that defined an era and a place. They aren’t just punk or rock or pop or disco. They are New York City – diverse, full of life, attitude and energy.

Say what you will, Blondie still sound great.

Sin City: A Dame to Kill For | review

Things Were Better Then

Probably Me by Polly Barrett | review