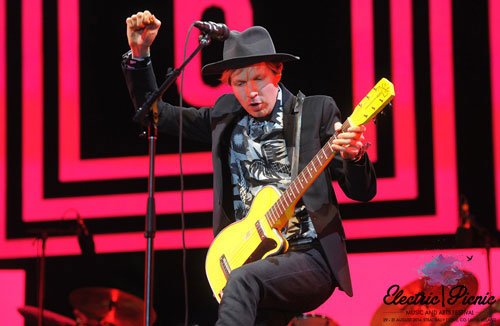 Atlantic Records was situated in the town square and 15 year old me had a voucher for a new CD. An arty looking neon pink and green album cover seduced my curiosity: Midnite Vultures by Beck. I had no idea who he was, didn’t know what the music would be like, didn’t care. I judged this CD by its cover and it changed my life.

I’d no interest in Take That or Boyzone. I liked Bob Marley, the Beatles and Bowie but this Beck guy, he was around now. He was making new music.

I became a fan. Not a screaming-I-want-to-marry-you type fan more a I-think-you’re-one-of-the-greatest-artists-of-all-time type fan.

I owned Stereopathic Soulmanure. Scratched at least four Odelay albums through overplay. Kept a scrapbook of his magazine cut outs and reviews. Saw his Futurama episode a billion times. His Celebrity Death Match against Bjork and MTV interviews are saved on old videotapes at home too.

I was allowed go to the first Witnness (just for the Sunday) to see him. I camped out in the pit all day, suffered through dreary Paul Weller and miming All Saints sets.

It was worth it.

I saw my musical idol.

He was so creative, his energy electrified us, he ripped up the stage. I still buzz about that set. Witnness loved him. The human pyramids, crowdsurfing and raining of paper cups spurred Beck to say, ‘Wait, I’m supposed to be entertaining you guys.’

The following year I saw him at Creamfields (Outkast were there too) and it brings back some vivid coming-of-age memories. Saw him in The Point a few times. Missed his Marlay Park support of Radiohead (the puppet show) because of misjudging Dublin traffic. Entering the concert as Beck was just leaving the stage, the crowd euphoric after his encore, I was distraught. I cried so hard. Even writing this down brings back the sinking utter disappointment of missing that gig. (Radiohead were stunning, thankfully.)

Last time I saw him was at Rock Werchter in 2008. Though he’s older now, with less stage climbing and antics and wacky dancing, he’s still an amazing performer.

Someone recently said to me, ‘Beck is just a studio artist.’ 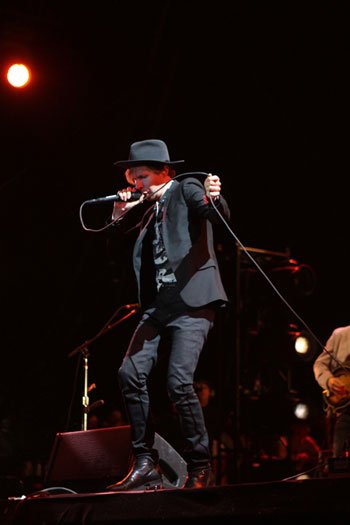 After a Neon Neon gig in Belfast, I ended up drinking with Har Mar Superstar and asked if he knew Beck.

He then retracted because of time zones and small Hansen kids. I’ve replayed this scenario in my mind but with that call taking place.

What on earth would I say to Beck on the phone?

‘Howya, Beck, your face or artwork or lyrics have adorned walls of most bedrooms I’ve had over the past 15 years.’

‘Howya, Beck, I don’t have a favourite Beck song, I have a current but changing favourite Beck song – right now it might be ‘Emergency Exit’ or ‘Missing’ or ‘Nitemare Hippy Girl’ or ‘Nicotine and Gravy’ or ‘Novacane’ or ‘Beautiful Way’ or the ‘Everybody’s Gotta Learn Sometime’ cover or ‘O Maria’ or ‘Minus’ or ‘Beercan’ or ‘Soul of a Man’ or ‘One Foot in the Grave’ or ‘Sunday Sun’ or ‘Ramshakle’ or ‘Girl’ or ‘I Think I’m in Love’ or ‘Blue Moon.’’

I’ll probably always be a loser for Beck and I will most definitely be nostalgic, inspired and elated, where it’s at – whatever stage he’s going to funk/folk/hip hop/soul/rock at Electric Picnic.

EM Reapy is from Mayo, has an MA in Creative Writing (Queen's, Belfast) and edits Wordlegs
In 2013, she represented Ireland and made the final six of Pen International: New Voices Award. She received an Arts Council Literature Bursary for her debut novel which she is currently working on.