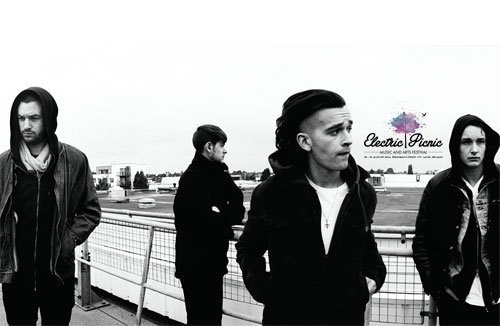 There are few pop artists currently around with as fresh a sound as The 1975. This year saw the pop-rockers burst into the mainstream, bringing with them a nostalgic nod to 1980s electro and head-bopping anthems, creating hit song after hit song. After a knock out performance at this year’s Longitude festival, the band returns to Ireland to play Electric Picnic this month.

Their unique sound emerged with a polished clarity, the extent of which is unusual for a band of their age. This largely amounts to their long standing career writing music together from the age of fifteen, and perfecting the balance between hit pop songs and angsty heart-wrenching teenage woes.

The 1975’s debut self-titled album boasts sixteen tracks of impressive range, but all with the unique vocal stamp that can only be Matt Healy. His often strained and emotional timbres reflect a certain perspective that has been largely ignored by other pop-rock bands of the last decade. For The 1975 it is all about heartbreak, and nostalgia, and the heartbreak of nostalgia. The ambient guitar lines and droning synthesizers seem to fit into a 1980s John Hughes prom scene, fulfilling the market of nostalgic, thirsty millennial teenagers in an age where looking back is the new looking forward. Imagine somebody put an instagram filter on The Kooks, and imagine it sounded great, that is The 1975.

Healy himself has become a kind of pop culture phenomenon; a sugar coated Mick Jagger, with the likability of an edgier Harry Styles. His fans are dedicated, unwavering, and when one observes Healy during a performance, it all becomes clear why. Healy is a born showman, striking more of those balances discussed, and remaining too-cool-for-school while also channelling the energy of a fan-girl at his favourite gig. He bounces his scrawny frame from one side of the stage to another, eager to interact with fans, while exercising incredible vocal control. His live energy is palpable, and fed back to him in audience reactions. It is clear that this band is all about the live music, and at their most comfortable interacting with their fans.

If you didn’t see their Longitude set this year, catch The 1975 at Electric Picnic, and have yourself a 1980s prom dance. It’s the perfect music to shift someone in a flower crown and pretend to fall in love. They’re fun, gorgeous, and don’t take themselves too seriously, and if that isn’t what Electric Picnic is all about then I don’t know what is.