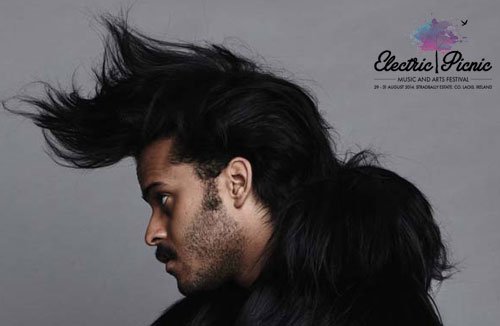 I’ve listened to some of Twin Shadow’s 2010 album ‘Forget’ and 2012 album ‘Confess,’ but for the purpose of this article, I’m just going to discuss two of his songs: one that I was obsessed with and one that I’m still obsessed with.

A little bit thrown by his name, Twin Shadow – I had imagined some dark IDM, a mingling of Aphex Twin and DJ Shadow – I was quite surprised when I heard his music for the first time. The song ‘Five Seconds’ had been recommended on some or other list and I was on a downloading binge.

It wasn’t trip-hop or ambient or electronica. It was a 2012 eighties anthem.

‘Five Seconds’ is not unlike Boys of Summer or Purple Rain in passion or sound. It also has an eerie atmosphere. It gives me the chills a small bit. Kind of like the feeling brought about by the Twin Peaks theme tune with the synth overload. This song has that vibe. It’s also moody, angry, ardent.

The lyrics are simple but rather devastating in their desperation.

‘Five seconds in your heart

Straight to the heart

I can’t get to your heart’

All these bleak elements combine to make a great song. Listen here:

Twin Shadow doesn’t just do the 80s well, he fast forwarded a few years and recreated the early nineties in 2013 with ‘Old Love/ New Love.’

Nostalgia seems to be his thing.

Old Love/ New Love was one of my favourite songs of last year and I’m still crazy about it now. A piano heavy dance-pop tune with great lyrics, it really pulses.

you said just sleep with me

This catchy tune is so bittersweet I’m always yearning by the end of it. And the only way to solve that is to just play it again.

It will remind some of GTA 5. This and another Twin Shadow song were featured on Radio Mirror Park which is hosted by none other than George Lewis Jr. It reminds me of half falling in love with someone I shouldn’t have.

What will you reminisce about listening to it?

Will be expecting an emotional but slick set from Twin Shadow at this year’s Electric Picnic and praying to the gods of chillwave that he plays these two songs during it.

EM Reapy is from Mayo, has an MA in Creative Writing (Queen's, Belfast) and edits Wordlegs
In 2013, she represented Ireland and made the final six of Pen International: New Voices Award. She received an Arts Council Literature Bursary for her debut novel which she is currently working on.

Aleister Crowley, “the wickedest man in the world”