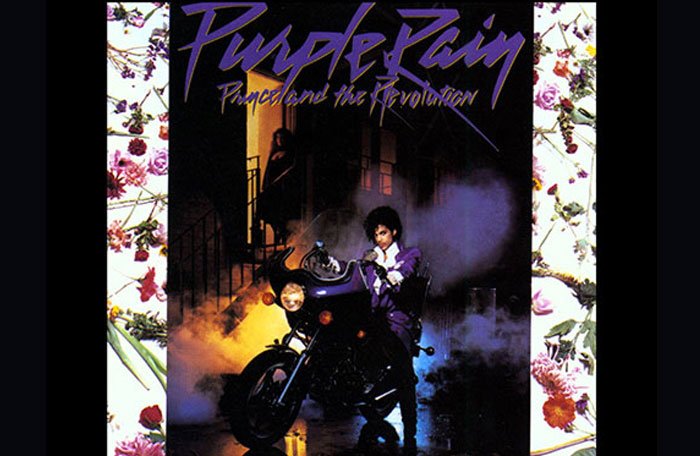 My relationship with Prince up until recently has been fairly one-sided. He has put out 29 albums since the year I was born and I have ignored every single one of them. Out of the two of us he’s definitely gone through many more radical changes in that time. His name, his sound and his very identity have at times been unidentifiable from one year to the next. I often heard Prince’s music through those songs which were his most radio friendly. So I thought his range was limited to Little Red Corvette and a host of instantly forgettable ballads. His sixth studio album Purple Rain (1984) proved me wrong.

Purple Rain celebrated its 30th anniversary this year. If you mutter Prince’s name in most circles the first thing out of people’s mouth are the words “purple rain”. Even before listening to the album I had some loose knowledge of what I was letting myself in for and I knew that it turns up repeatedly on best of lists. What I didn’t know about the album when listening to it was it’s one half of a project. Purple Rain the album is part of Purple Rain (1984) the film. Semi-biographical, the film was a pet project of Prince’s and by all critical measurements wasn’t a complete disaster, with some people even considering it a cult classic. But does the soundtrack hold up?

Taking into consideration that over the past three weeks I’ve gone from alternative rock with Radiohead and folk with Neutral Milk Hotel, Prince came as a bit of a shock to the system. This was mostly  down to the fact that I immediately liked it. It’s hard not to like something that opens with what sounds like warped church organs being passed through a synthesizer. What follows is the rest of Let’s Go Crazy, a song that stuck in my head for days. The music shifts from choral into speedy pop and begs you to come along and just have some fun. After the monologue the rest of the lyrics are kept short and sweet, yet conveying a surprisingly complex message that even includes what I think is a sly comparison to the promised return of Jesus Christ and an orgasm. Religious themes and sex turn up again in this album.

Take Me With U* is the most obviously soundtrack-like element of the album. Despite excellent drumming and a strong beat it comes and goes without much ceremony. It’s not bland but it’s not remarkable enough either and seems to be the weakest and most typical of all the tracks.

Throughout the album there’s a core consisting of both R&B and funk, tempered with rock and polished with electronica but Purple Rain is actually dirty, rotten pop. And I mean that as a compliment. As proved by Darling Nikki, a song that was bound to get Prince in trouble. Even now I can hear the monocles falling from the delicate faces of the 1980s’ moral soldiers as they plop right into champagne flutes of fizzy milk. Within the opening lines we have a reference to female masturbation. And by the end we have a whole lot of begging. Out of all the genres it’s pop that does sex well. If a pop song isn’t talking about love, or some facsimile of love it’s almost definitely talking about sex. The difference is how raw Darling Nikki is. It’s unapologetic. Prince’s voice and the guitar are underscored by a pounding, relentless and constant drumming. Nothing is hidden. This is a song about sex. That’s the end of it and that’s a refreshing level of honesty in pop music we rarely see. Most are trying to hide the reality they are, in fact entirely about sex. But Prince did it a lot better. It’s in stark contrast to one of the album’s most famous tracks, When Doves Cry.

When Doves Cry is remarkable because of the absence of a bass line. All the other instruments are played by Prince himself. There’s no doubt this is a dance song but without the bass there’s a bizarre sparseness that marks it out from others. It might be because it’s difficult to make a dance song about that kind of turmoil. Although it does seem to be the least mature lyrically and probably has more to do with the chaotic relationships of teenager then fully-grown adults. The song is full of the kind of melodrama that leads people to believe Romeo and Juliet’s suicide is both romantic and about love (it’s about revenge). Often there’s a pained quality to Prince’s music. It seems like he desperately wants to lead the life he is proposing but clearly isn’t.

It’s not until the song Purple Rain itself all the way at the end of the album does that a hint of the psychedelic really begins to show itself. Although constructed like a classic r&b song, there’s a touch of the psychedelic in the warping of the guitar and the almost otherworldly sound of Prince’s voice.

The biggest surprise with this album was how weak it makes contemporary pop look. This is incredibly indulgent of its performer and represents Prince at the height of his power. Sometimes there is a bit of balladry that’s almost sickly sweet. But it’s performed with enough intensity and integrity that, at the very least it comes off as honest. Not only are there genuine moments of sweetness and celebrations of love but also a raw sexuality that refuses to turn away from its source, a very human experience. The album sounds like the work of somebody fully dedicated to enjoying everything life has to offer and isn’t going to play coy about it.

I nearly picked Let’s Go Crazy but out of everything on the album it’s the song that holds up best on its own and is a good indication of the albums tone and content.

*Assume each song title in this review comes with a sly [sic] afterwards because his innovative use of language long before the popularisation of texting is driving my inner Grammar Nazi nuts.

Blood on the Paddle – Chapter One