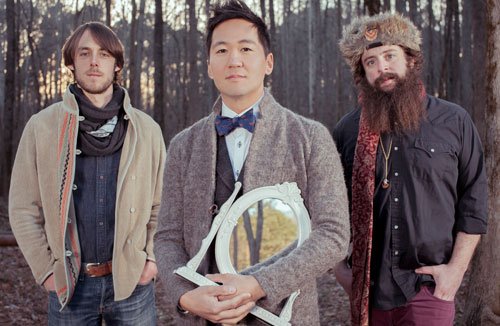 Intimate, heart-warming, and wholly charming, Kishi Bashi was absolutely gorgeous at Whelan’s on Saturday night. The support act came in the form of the NYC cosmic one man banjo experience Tall Tall Trees, before the evening evolved into a beautiful display of musical artistry and passion.

To say that Tall Tall Trees was a support act is to grossly undermine his contribution to the evening. He provided those just walking in from the bar, pint in hand and ready for some hard-core folk, with exactly what they were after. Following some gorgeous looping and improvising on what can only be described as a banjo from the stars, and some hilarious anecdotes (and requests for someone to buy a bag of weed from), the tone was fully set, as he launched into an eerie and melancholic journey that formed the remainder of his set.

Kishi Bashi opened with the sensational ‘Philosophize in it! Chemicalize with it!’, which was as sonically pleasing as it was energetic. Even more so than the studio version, the vocal clarity and depth of harmonies were striking, blending beautifully with animated yet subdued percussion. The reintroduction of Tall Tall Trees on banjo was wholly welcomed by the crowd, whose hilarious quips were juxtaposed against the sheer and utter effort he gave every melodic line he took. They all wanted to be there. I wanted to be there. So we were on the same page from the start.

After a couple of album tracks from the glorious Lighght, the evening reached its energetic highpoint as Kishi Bashi abandoned his violin in favour of dancing around and interacting with the crowd during ‘The Ballad of Mr. Steak’. The passing around of a pint of Guinness from one band member to the other, added to the casual and messy overall feeling, steadily assuring us that they were out for a good night just as much as we were.

After the rest of the band departed the stage the crowd were treated to a shy and subdued performance of the stunning ‘Bittersweet Genesis for Him and Her’, before which the performer recalled to a silent audience dream he once had in which the creation of life and the universe, and its continuation, was the act of two lovers. Heavy enough. The poetic aesthetic of the track carried beautifully in a live setting, as the crowd began to realise Kishi Bashi as a passionate artist, not only masterful of his instruments, but words, storytelling and the conveyance of meaning. My emotional stability was just about ready to all it quits after this song, due to it being my favourite on the album, and the precious nature of the acoustic performance, but the best was yet to come.

Upon the opening looped violin chords of ‘Manchester’ the crowd seemed to have reached an emotional catharsis. It was one of the more familiar songs of the night to the crowd, and it worked charmingly. The pizzicato resonance of the chorus guided the audience who took up most of the vocal work, to the point at which the performer looked entirely overwhelmed by the song’s familiarity in the crowd. Looping upon looping, upon glissando, upon pizzicato, lead to an explosive finale which appeared to be as emotional for Kishi Bashi as it was for the audience.

Following the gig I found myself taking a look at my finances and questioning would it be feasible for me to travel to see Kishi Bashi live again on any other date of his tour. It wasn’t. I settled for listening to the two astonishingly mature and developed albums that he has released over and over again. I couldn’t have wished for a better performance, or a better venue for the artist. The gig was perfect and we were all lucky to have been there.

Review | Warpaint offer more of the same on Heads Up

Review | Overhead, The Albatross live up to the hype on the triumphant Learning To…