Review ratings are a funny thing. They are of course meant to be a rough guide, something for the reader who doesn’t have time to skim past and go “okay, that’s good, I’ll get it” or “no, it’s terrible, I won’t”. However, they are also heavily prone to misuse (“listen to this wanker, it’s all subjective”, you’re probably thinking to yourself, but hear me out). People have a tendency to go from one extreme to the other with them; if something’s good then it’s somehow automatically four or four-and-a-half out of five, if it doesn’t meet expectations then it goes to the other end of the scale. Giving something, say, three out of five (or in other words, “better than most”) is now somehow perceived as a negative.

Nowhere has this trend been more evident recently than in the critical reception that Marina & The Diamonds’ new album FROOT has gotten. The album has received a barrage of four (and five!) star reviews. It has emerged as Marina Diamandis’ highest-rated release to date in that sense and it’s very hard to see a justification for this despite the fact that it’s a good record in places. It falls short of its lofty ambitions and features many of the same traits that she has been criticised for in the past. 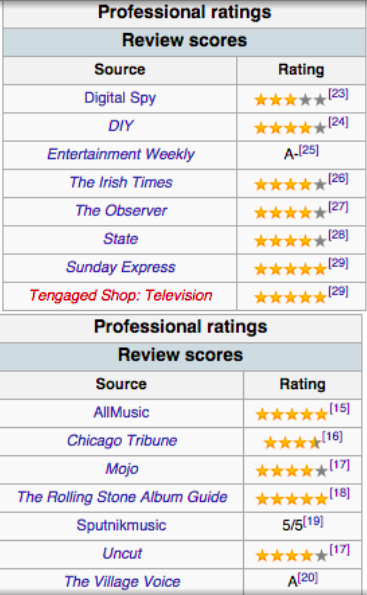 One thing that has clearly been corrected on FROOT is that Marina has taken a much more focused approach.  The album is a lot less upbeat than previous efforts and centres on themes like regret, loneliness, human nature (the negative side of) and her own mortality. Unfortunately, the result is much less fun. One thing that you can say for records like Electra Heart is that there are a number of genuinely enjoyable pop songs on them. This isn’t completely absent here; the title track is really good, ‘Forget’ is catchy and ‘Better Than That’ finds Marina in combative mood:

It is at moments like these that she is at her best and it’s a thoroughly enjoyable track. However, there just isn’t enough of it here. FROOT starts out promisingly (from ‘Happy’ to ‘Forget’) but takes a huge dive into mediocrity in the middle with a number of dull, withdrawn ballads such as ‘Gold’, ‘Solitaire’ and ‘Weeds’. Things briefly pick back up with ‘Better Than That’ but the closing efforts are similarly underwhelming. ‘Savages’ takes the rather original step of musing about how we humans are actually savages:

“Is it running in our blood

Is it running in our veins

Is it running in our genes

Is it in our DNA

Humans aren’t gonna behave as we think we always should

That was sarcasm, by the way. It’s a childish, simplistic and uninteresting song that is unfortunately also trying really hard to Say Something about the world. The album closes with the solemn ballad ‘Immortal’. It’s good, but suffers from many of the same trappings as earlier songs; it really feels like she’s reaching too hard. It goes from being quite clever (“If I could buy forever at a price/I would buy it twice, twice”) to once again coming across as forced and immature (“We wanna be remembered/Don’t wanna live in vain/But nothing lasts forever/This world is a losing game”).

Marina & The Diamonds is really shrewd at creating bouncy and eccentric 80s-influenced pop music. When she does it here, it’s excellent. However, her strengths are in short supply. Diamandis has been criticised in the past for being unfocused and muddled and this almost feels like an attempt to answer those admonishments. However, she seems to have focused on the wrong things. I would have preferred an album full of over-the-top pop songs and rebellious lyrics as opposed to one that is weighed down too heavily by sullen ballads and pseudo intellectualism. It’s a perfectly fine record and certainly has its moments, but don’t let all the hype fool you; you won’t be finding this at the high end of Rolling Stone’s Top 500 any time soon.

TWO AND A HALF OUT OF FIVE