There is a worrying lack of self-awareness about Muse’s seventh studio album, Drones. For a start, it has a cover that makes the “greased, naked woman on all fours with a dog collar around her neck and a leash, and a man’s arm extended out…holding onto the leash and pushing a black glove in her face to sniff it” sleeve from This Is Spinal Tap sound almost credible by comparison. It’s of a big man who is controlling another man who appears to be controlling lots of other men remotely, you see. And they’re using Atari 2600 controllers to do so. The guy who designed it posted this to Instagram upon its completion, further increasing the sense of parody: 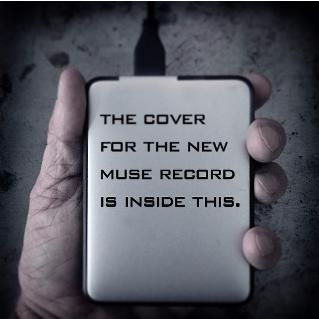 And then there’s the actual music. It’s a high minded concept album, of course. As lead singer Matt Bellamy explained to the band’s official website in March: “To me, ‘Drones’ are metaphorical psychopaths which enable psychopathic behaviour with no recourse.  The world is run by Drones utilizing Drones to turn us all into Drones.  This album explores the journey of a human, from their abandonment and loss of hope, to their indoctrination by the system to be a human drone, to their eventual defection from their oppressors.”

Uh, yeah. Music of rebellion from a group of thirty-something millionaires who have frequently taken money from advertisers for the use of their music, then. Lyrically, Drones is full of all of the expected tropes, each as heavy handed and childishly applied as the last. The ‘protagonist’ is dumped by his partner early on (Bellamy recently got divorced) and heads off to join the military.  This process is described in the opening track ‘Dead Inside’ where the Muse frontman notes:

Good to see he’s not holding any grudges about that break up. Here he meets the DRILL SERGEANT who, of course, turns him into a psychopathic killer by doing his best Gunnery Sergeant Hartman impression. Then, to cut a long story short, the ‘protagonist’ heads off to war, realises he’s MADE A HUGE MISTAKE, leaves the military, decides to overthrow the government, finds love again and confronts the ‘Dictator’. However, it all goes wrong here, because the Dictator destroys the world leaving just the two lads until the end of time. This is summed up in the album-closing title track:

“Killed by drones
My mother, my father,
My sister and my brother
My son and my daughter
killed by drones
Our lives between your fingers
Can you feel anything?
Are you dead inside?
Now you can kill
From the safety of your home with drones
Amen”

Grim scenes. There is no evidence to suggest that this is actually some kind of attempt at satire, but rather a legitimate attempt at a high-concept sci-fi rock opera. “Many will mock, but the day Muse decide ridicule is something to be scared of will be the day they’re doomed.” contends The Independent. In this context, it is hard not to imagine this record as the fat guy sitting naked on the subway in that episode of Seinfeld. It isn’t ashamed, but it really ought to be. It’s a masturbatory, dull narrative that is borderline offensive: people are dying every day from drone strikes and it isn’t something that should to be trivialised in this manner.

It should be noted, however, that Drones also contains music to accompany its awful lyrics and it’s largely good in a guilty pleasure sort of way. The glam rock riffs of ‘Psycho’ are sort of brilliant (but it’s kind of ruined by the cringe-inducing wailing of the Drill Sergeant) while the thumping metal of ‘Reapers’ is pleasing and fun. The theatrical nature of ‘Revolt’ and particularly ‘The Globalist’ is also enjoyable if cliché. It is certainly well put together musically and in that sense there is plenty to like, but not enough to save Drones from itself.

For all of their undoubted talent, Muse have always been average at best lyrically and on Drones that side of things is positively embarrassing. Seven albums in, they seem to be bereft of good ideas as this brilliantly ham-fisted attempt at Saying Things so aptly demonstrates. Muse diehards will undoubtedly love this record as it is something of a ‘back to basics’ outing in comparison with the experimental nature of some of their recent work. Everyone else, however, should stay well away unless they feel compelled by morbid curiosity.

ONE AND A HALF OUT OF FIVE