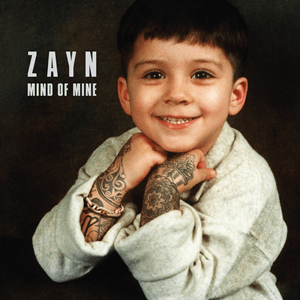 In describing his new album, Mind of Mine, One Direction alumni Zayn Malik – aka ZAYN –  has cited a number of interesting artists as being influential on his first solo effort: Tupac Shakur, R Kelly, Prince and Gregory Isaacs among others. Musicians of a (mostly) bygone era and held in the highest of regards by critics and fans alike.

It is interesting, then, that there is practically no trace to be found of them here. Instead, Mind of Mine is a sort of Greatest Hits hodgepodge of things-that-have-been-popular-in-the-last-five-years. Justin Timberlake, John Legend, Frank Ocean and The Weeknd would all have good reason to raise an eyebrow at a record that borrows unashamedly from all of their work. It is very much reminiscent of Justin Bieber’s Believe, which was also carefully crafted to tap into music that is trendy right now. Much like Bieber, Zayn doesn’t do a bad job of impersonating his peers, but there is a certain hollowness here that stalks every note. Even the artwork is a complete take off of Lil’ Wayne’s Tha Carter III.

The only truly striking track to be found here is an intermission, named ‘fLoWer’ (the titling of each song was apparently done by the bot that can usually be found in your “Spam” email folder, trying to hock Viagra) which is sung in Urdu and boasts a beautiful, spiritual melody. It is the sort of thing that might not be expected to be in Zayn from One Direction’s locker, and it’s a crying shame that there is not more of it to be found here. Speaking to The Times about lead single ‘PILLOWTALK’, Zayn noted that he wrote the song about sex: “Everybody has sex, and it’s something people want hear about. It’s part of everybody’s life, a very BIG part of life! And you don’t want to sweep it under the carpet. It has to be talked about.” This logic might be compelling if the song itself did not sound like Diet Weeknd.

‘It’s You’, meanwhile, sounds like something that got cut from Channel ORANGE – clearly intentional as it is produced by Malay, who worked on that record – and that is certainly not a bad thing as it’s perfectly serviceable and Zayn’s performance is excellent. His delivery on album highlight ‘rEaR vieW’ is so similar to John Legend in cadence that upon first listen you would be forgiven for looking it up to see if the man himself was providing a feature on the hook. The production on ‘wRoNg’ featuring Kehlani is worthy of the grimiest Weeknd track, another testament to the personnel that the considerable promotional heft behind Zayn was able to pull in. In terms of presentation, there is hardly a missed beat on an album that seeks to emulate a lot of the best pop music of recent years and almost always succeeds.

The problem is, as noted, is that it does so musically and not in substance. By the time Zayn finishes up with ‘TiO’, another song filled with references to various Weeknd lyrics and tropes, it’s hard to escape the feeling that you have just consumed something that was bought and paid for. Carefully crafted by a legion of marketing/advertising, public relations and production teams all working towards to the goal of making something that is easily consumed by the largest number of people. It’s a real Dominos meal deal of an album. Totally enjoyable while in the midst of it, but by the time that third can of Coke and the last bit of garlic pizza bread has passed, it becomes abundantly clear that that you have just consumed about 3,000 calories of what is a pale imitation of real food.

Overwrought metaphor aside, Mind of Mine is well put together and Zayn could indeed make a career of this sort of stuff, such is the high quality of its presentation. That said, particularly given how vocal the man himself had been as to its artistic merits now that he is free of One Direction, it is the one crucial area that is sorely lacking. He has nothing new to say, nothing different to offer the pop music landscape. The one hint of it is buried somewhere in the middle. Zayn Malik is clearly a talented musician and there may yet prove to be substance beyond all the hype. It just isn’t to be found here.

For further thoughts on ZAYN’s debut, check out the latest episode of the NO ENCORE podcast.