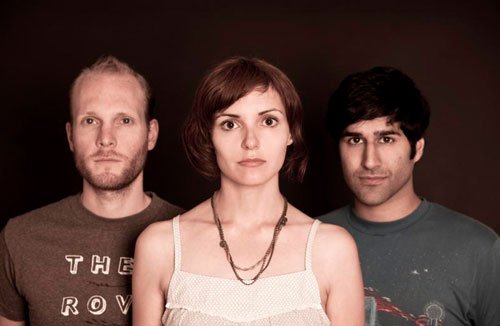 Encompassing a mish-mash of genres, sounds and tones, ‘Mended with Gold’ is a quintessential jack-of-all-genres indie rock album from Canadian band The Rural Alberta Advantage. Much like their name, this album is a mouthful. To try to pinpoint a particular theme will leave you falling short, as will the search for the overall genre. At times you may find yourself drawing comparisons to such groups as Neutral Milk Hotel, or indie boppers Foals, but this album is far more than imitation of art.

‘This City’ opens with an obvious nod to the infamous ‘Two Headed Boy’ by previously mentioned NMH, but deviates from this subdued aesthetic into a reverie of melancholic catharsis. The rhythm borders on counterpoint in the relationship between the percussion and guitar lines, while the tonal structure is maintained in the chorus upon the introduction of supporting vocals by keyboardist Amy Cole. It is the vocal interaction between Cole and Edenloff that prevents this track from bordering on the juxtaposition of perhaps too many sounds. The bombardment of rather frantic drumming from Banwatt is subdued by an acute awareness of the tonal and harmonic properties that make a piece sound ‘whole’.

Following the introduction of this vocal harmonic relationship, it bursts into full swing in the gorgeously gloomy ‘On the Rocks’. Edenloff and Cole wade through a distorted under-water-esque introduction, until a taster of the structurally centred piano line begins to echo in the acoustic realm of the musical space. Meanwhile Banwatt absolutely smashes through the subdued atmosphere with a percussion line that seems as emotionally dissonant as it is it liberating.

Edenloff’s stunningly emotive voice introduces a contender (along with ‘On the Rocks’) for best track on the record in the push/pull dynamics of ‘The Build’. The title prepares the listener for the building of tempo and dynamics in the striking chorus. The vocal and acoustic guitar relationship is a match made in heaven, and when accompanied by the almost post-rock shredding of atmospheric electric guitar, and supporting piano in the chorus, the result is an overwhelming sense of emotional outpouring.

Between Edenhoff’s emotive vocal and lyrical aesthetic, Cole’s support system in both vocals and keyboard, and Banwatt’s counter melodic percussion, the band seem to have an intuitive knowledge of their own personal musical goals. The record is relatable, both in its musicality and lyrical content, to fans of aforementioned cornerstone groups of indie rock. It’s polished and honest from start to finish, with some absolutely glorious tracks in between.