Well, it would be rude not to, wouldn’t it? After all, we’ve had the 20 Best Songs of the year to date* so this is the only logical follow-up. Following a truly rigorous selection process, we’ve come up with a fair reflection of the absolute worst of 2015 so far and we’re confident you’ll approve of said choices.

*Had we heard Selena Gomez & A$AP Rocky’s hypnotic ‘Good For You’ and Alice Glass’ blistering ‘Stillbirth’ in advance of posting said list, you can bet big money that they would have placed, but hey, there’s always the end of the year list to consider. For now, let’s roll up our sleeves and get stuck in.

Remember, this was a pain-staking selection process.

DAVE HANRATTY: Well this is a no-brainer. A wretched attempt at satire that instead registers as painful self-parody. A fucking disgrace.

[iframe id=”https://www.youtube.com/embed/qbxUQsJHIuU”]
I honestly believe that anybody who makes it through all two minutes and fifty-three seconds of this should be given some kind of special global recognition. It’s easy to see what Liam Howlett and The Lads were going for here; a knowing sideswipe at the kind of Calvin Harris-approved homogenous club music that has overtaken the resorts since their heyday. Turf in proper ‘ard ‘OI OI!!!’ rabble rousers Sleaford Mods (they think they’re social commentators, bless) and surely the result could only be a razor-sharp indictment of modern hedonism and lazy DJs, right? Er, no, not quite. ‘Ibiza’ lands with a thud so pathetic it deserves to be held aloft under especially garish light as the official nadir of The Prodigy. [DH]

third of the way through. See, I wasn’t as familiar as I would like to have been with this song before we decided to do this piece, so in order to do so I decided to embark on a marathon session of listening to it on repeat and drinking liberal amounts of whisky in order to make the experience more, shall we say, palatable. Everything about this song is vile. The beat is terrible, Keith Flint’s vocals are weak, even the theme is almost unbelievably pathetic. The *Prodigy* of all bands trying to indict modern “dance DJs” with their finangled USB sticks and their private jets as if Ibiza ten or twenty years ago was somehow some sort of modern day Woodstock. The cycle of aging musicians castigating the music of those who come after them and steal their relevance. It would be funny, if it wasn’t so sad. [JH]

Feel like I need to take this opportunity to formally apologise to Big Josh here for landing him in this predicament. Much like the videotape from Ringu, I felt the overwhelming need to pass this on to another, to share the pain in a bid to numb it. There’s no respite from this particular throbbing ache though. ‘Ibiza’ is the sound of a confused, doomed cat with a live chainsaw rammed into its side. [DH]

READY MIX, PACKET OF SMASH. I’m on what must be about my 37th consecutive listen. I return to my computer from the kitchen, having knocked up another drink and it’s like one of those mornings when you wake up, think it’s Saturday when it’s actually Tuesday. Except Tuesday is this fucking Prodigy song again instead of your mundane day job. Grim scenes, to say the least. Stockholm Syndrome has set in, however, and I’ve begun to feel sorry for my captors. It must be difficult staring at all of these kids with their “bleached-hair wanking mates”, surely?! 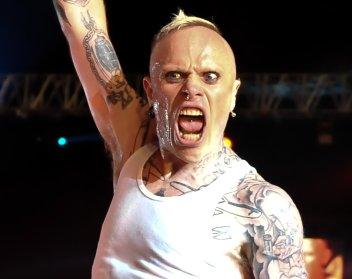 If you hit up http://genius.com/The-prodigy-ibiza-lyrics, you’re met with the following:

Sleaford Mods are well known for knocking down other scenes of music that are just generally meaningless.

In this song, Sleaford Mods use The Prodigy as a platform to almost double-satirically portray the image of Ibiza and also knock at EDM. It’s quite funny when you take a step back from it.

But a song this WHITE KNUCKLE RELENTLESS doesn’t allow you to step back. No, sir. It’s pedal to the metal on the motherfuckin’ wheels of steel. It’s a shit reference to Danny Dyer. It’s carnage, baby. It’s MAYHEM. It’s a screaming broken pinball machine that just wants to be plugged out. It’s about having the gall to slag off any other musician when you’re arrogantly parroting this dreck. As for big bad Sleaford Mods? WATCH OUT, TIRED MUSIC SCENES, you’ve been well and truly fackin’ warned guv. [DH]

IHS ALL ABAAT DA GEEAH. The room that I’m in feels like it could be a cell in Guantanamo Bay, at this point. I’m doing “research” in another tab, reading pieces written about The Prodigy in the lead up to release of this record:
“I hate to be the guy that’s like, ‘It’s not like it used to be’, but there is a grain of truth in it,” agrees Keith Flint, chucking back another Jägerbomb (“I can drink,” he notes drily).
Well, I’m half-cut, Keith and it appears that you’re revelling in being that guy to the point that you’ve made a snarling, ghastly song in an attempt to show the world that “it’s not like it used to be”. It also would seem that you’re 45, own your own motorbike team called “Team Traction Control” (lol) and are probably a little bit out of touch with the people that you’re purportedly singing at. [JH]

EIGHT QUID A PACKET?! It’s nearly midnight of a Thursday, as I chug my fifth drink of the evening. “I can drink”, I note drily (to myself). What does Big Keith mean by eight quid a packet? Cigarettes? £8? Surely they’re not that expensive in England and surely they’re not that expensive in Spain as to the best of my knowledge they tend to be cheaper in other parts of the continent. Then – if I’m right – what does the price of cigarettes have to do with the fall of Good Music in Ibiza? NO TONE, THEY’RE FACELESS, THE MIX ON STICKS. Was there some sort of correlation between the amount of tobacco consumed per Pound Sterling and the fall of the price of USB sticks/computer memory when it comes to quality music produced?!

No, it suddenly dawns on me, The Prodigy are just like other artists such as David Crosby who music and art has simply passed by. Things change, and certainly sometimes for the lesser (You Won’t BELIEVE What I Wrote In Number 5 On This List!) , but when an entire genre or generation is the problem, well then perhaps the issue is you. This is something that has been an obstacle throughout time. And, as I finish my 67th listen of ‘Ibiza’ and my seventh drink, might I just say: erfaw asdfsadfsa etfwaasdf