In Retrograde, we revisit albums to see how they hold up; good, bad or indifferent. First up, Conor Donohoe re-acquaints himself with Chris Cornell’s post-Soundgarden, pre-Audioslave venture; Euphoria Morning.

Chris Cornell’s been fairly busy since the turn of the millennium. The former Soundgarden frontman formed Audioslave with three quarters of Rage Against the Machine and released three decent if unspectacular albums. He delivered two solo efforts – one disappointingly dull (Carry On) and the other downright bizarre (the Timbaland-produced Scream). He even co-wrote and performed a Bond theme. Last, though certainly not least, he teamed up with Messrs Thayil, Shepherd and Cameron to reform Soundgarden, in a move that fans had been begging for years but never really saw coming.

By anyone’s standards, that’s a fairly impressive résumé for a vocalist who came from one of the most influential and celebrated grunge acts of the late ’80s and early ’90s. Where a lot of musicians may have struggled to keep themselves relevant and stay afloat in the public consciousness following the breakup of a genre-defining institution such as Soundgarden, Cornell has rarely kept quiet. Granted, he never did manage to release anything else approaching the quality of Badmotorfinger or Superunknown, but it can’t be said that Cornell didn’t stay relevant.

Yet this writer contends that it’s in the years before Audioslave’s birth where Cornell’s most interesting post-Soundgarden work lies. 1999’s Euphoria Morning marked his first solo effort (with the notable contributions of Eleven’s Alain Johannes and the late Natasha Shneider), and while critical response was favourable, it seems strangely absent from any modern Cornell-based discourse. This is a shame, as while it might just miss out on being his strongest vocal performance to date, it’s certainly his most diverse.

It started to become obvious with Soundgarden’s last pre-split album, Down On The Upside, that Cornell was starting to outgrow the Seattle-based grunge pioneers. Tracks like ‘Zero Chance’ and ‘Burden In My Hand’ hinted at Cornell’s longing to explore a more melodic  and expressive side, and it’s obvious he relishes in the opportunity on Euphoria Morning. While it starts off tentatively enough with ‘Can’t Change Me’ and ‘Flutter Girl’, there’s still a sense of freedom in the vocal tone and melodies that you sense Cornell would never have had the opportunity to demonstrate with Soundgarden.

Subsequent tracks, particularly the likes of ‘Follow My Way’, ‘When I’m Down’ and ‘Disappearing One’, often have jazz-like chord structures that present some real vocal challenges, but he passes each of these tests with aplomb. In terms of range, it had always been apparent from Soundgarden’s (and indeed Temple of the Dog’s) work that Cornell was second to none, but the ease at which he finds notes at sometimes very difficult intervals and rises to the challenge of the harmonically complex chord progressions on Euphoria Morning is to be applauded.

It’s not all gentler tones and blues-like vocals on show, however. Cornell still manages to display his trademark gravel-toned higher range to great effect, particularly in the choruses of ‘Disappearing One’ and ‘Steel Rain’.

Lyrically, there’s a vulnerability in the album’s themes that Cornell had rarely if ever touched upon on previous endeavours, and arguably hasn’t done since. The lyrics are typically cryptic and difficult to interpret fully, but there’s no mistaking the darker tones present in the likes of ‘Steel Rain’:

“And so we start another day together

You and I and the million miles between us

I train my moods to bloom like flowers unfolding

Instead of fluttering around

And slowly drowning in the

Even in the more outwardly upbeat songs, there’s an underlying sense of self-consciousness and brittleness, as demonstrated in opener ‘Can’t Change Me’:

“Suddenly I can see everything that’s wrong with me

But what can I do?

I’m the only thing I really have at all

But wait just one minute here

I can see that she’s trying to need me

She’s going to change the world

In short, Euphoria Morning is a disarmingly charming yet often dark affair, often achingly gorgeous but always musically interesting. It isn’t perfect – in particular, the tracks ‘Moonchild’ and ‘Pillow of Your Bones’ fail to stand out in any meaningful way, but this is only because they fail to assert themselves as much as some of the more unique songs like ‘When I’m Down’, ‘Disappearing One’ and ‘Wave Goodbye’.

Perhaps I’m not saying anything that reviewers didn’t when the album was originally released 15 years ago. However, I contend that, considering what Cornell’s been involved in since, Euphoria Morning‘s identity has only gradually come to light over the last decade or so.

While Audioslave held their own as band and managed to distance themselves from the ‘Rage Against the Machine with melodies’ tag by their second album, their music often feels depressingly basic when compared to what Cornell managed on Euphoria Morning. Granted, the voice wasn’t at its best at this point of his career, and I don’t think anyone was ever expecting a Tom Morello-driven band to be a harmonically complex one, but most of their music still feels disappointingly restrictive for Cornell in particular. From their first album on, the argument could be made that Audioslave probably wasn’t the best vehicle for his talents.

Cornell tried his arm at solo work for a second time with 2007’s Carry On. A jaded, plodding affair, it offers very little in the way of the innovation or creativity found on Euphoria Morning. Again, Cornell’s voice wasn’t what it used to be at this stage and had audibly deteriorated years before Carry On ever went into production, but his lack of range doesn’t excuse the weariness and predictability of the chord progressions and the accompaniment in general. 2009’s Scream was almost certainly his mid-life crisis album, a man without a band trying to make himself relevant again. One or two barely acceptable tracks aside, it’s probably best that it’s shelved from any conversation about Cornell’s legacy. [Ed note: Unless Trent Reznor is doing the talking:] 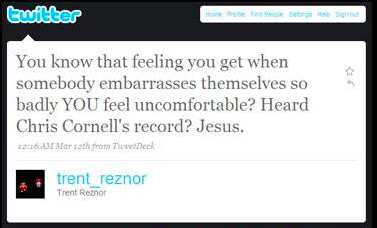 His most recent outing, the reformed Soundgarden’s King Animal, could be discussed in an entirely separate piece, but focussing on Cornell’s contribution, it’s… well, it’s a Soundgarden album, and not a particularly innovative one at that, with Cornell not doing anything vocally that he hasn’t done with them before.

While Euphoria Morning isn’t an earth-shattering album that would change the face of rock music forever, its legacy and importance has actually become more pronounced as time has passed. What might have been considered a quirky and somewhat pleasantly surprising effort when it was originally released has taken on more and more weight with each subsequent album or project that Cornell’s been involved in. If fans had been hoping for something more innovative from him than Audioslave post-Soundgarden, it had already come and gone. If Cornell himself was trying to escape the shadow of his grunge past, he had already produced the perfect album to do just that.

Euphoria Morning may only go down in history as a footnote of Cornell’s career, but it makes a very compelling case to be retrospectively acknowledged as one of the most important records he has ever released.

Conor Donohoe is a DCU Journalism graduate, video game and fantasy novel enthusiast and long suffering Tottenham fan. When not at work, he idly plucks at a guitar or bass, occasionally hits drums, and also plays the clarinet. Conor's favourite album is Rage Against the Machine's Evil Empire.