I know there’s some controversy about businesses and bars profiting from people giving of their art for free, but I think it would be a good result if the outcome of Culture Night was better awareness of how much is going on artistically in your own area. I was really pleased, then, to find so much variety and colour at the Irish Writers Centre.

Frank Buckley was an art collector who donated many of his prized collection to the Irish Writers Centre because he wanted other people to enjoy it. On the tour delivered by Jack Gilligan we heard Frank described as a generous and polite man. It is an eclectic collection – a small painting of delicate purple flowers, giant abstracts, a pensive woman in a green sweater, a serious looking boy with his arms folded standing beneath a Moroccan Tower who looks directly at us as we look at him. It is this painting, Walled City, which pulled something together for me- as I looked at it I realised that a number of the pictures have lone figures, often boys or men, and some others have a lonely quality as well; a darkness or sadness about them. Others were different (a bright rainbow ‘tree’ in an upward pointing arrow against a black background, a piece called ‘Black Painting’ which descends from light into deep black, but always with point of pink light breaking through).

It made me wish that I had known Frank Buckley.

I Googled him when I got home and was pleased to find so many obituaries speaking of how well loved he was. He was quoted as saying that he felt his relationship to his partner Michael had saved his life. Thinking of the paintings and their journey from darkness to light it was easier to see that they may have reflected his own struggles, and his own conclusions about the presence of hope, and I could see what people meant about his generosity. Anyone can call into the Irish Writers Centre to see the collection.

I entered the Inkslingers writing workshop late to find a large group of people, all very quietly scribbling away. They kindly let me join them and we read our pieces in the round. The reading that interested me most came from a woman who clearly had more words in her head than there was room for- they came tumbling out with such stream of consciousness force it made me think of the Beat poets. The parts which made sense were knocked off their trajectory by the lines which followed. I have never heard anything like that in a writing workshop and I have to say I loved it, and it made me feel like the Inkslingers might really be a place for anyone who wanted to write. You can join them every Saturday in the Irish Writers Centre. 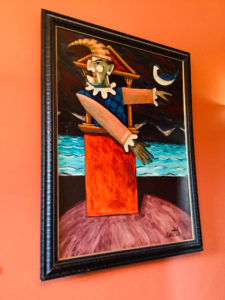 At the end of the evening I joined a packed audience for Holy Show’s Rambling House; an evening based around a traditional event where people would go to one another’s houses for entertainment, rather than going out. So we had songs, poems and true-life stories. Within five minutes of being there I was on the verge of tears listening to a heart-breaking poem about the poet’s brother’s death. Later we’d have film footage interwoven with a story about someone’s grandfather – a beautiful tribute in a tale told live in the room but also via recorded snippets of the grandfather talking and singing. A poet spoke about faith and the loss of faith in a story about his father; ‘I had a candle and my brother had a candle. His was lit and mine wasn’t.’ There was a gorgeous singing. At the break the compere jokingly offered a benediction and invited us to give one another the sign of peace. And as some did this it was clear that it meant the same thing as it does when you do it in a church. I spoke to the person selling copies of the Holy Show magazine and he told me that they had wanted to set something up where people could tell their real life stories. It reminded me of a cross between two Belfast events- Ten x 9, a monthly storytelling event where people share real-life stories based on a theme, and Ikon, a regular event from some years ago where artists and writers (including myself) would develop a performance investigating a religious or philosophical idea. I miss being part of local art events like this, and it was lovely to experience something so considered and joyful in Dublin.

And the communion? A glass of Buckfast. A cultural first for me!

I felt very welcomed at the Irish Writers Centre. I stepped through the paintings that Frank Buckley had loved, learning of his continued interest in spirituality despite his crisis of faith, then visiting the Inkslingers writers working to ask and answer their own selves, and on through to a time of listening and blessing with Holy Show. It’s a church I could deal with.

Many thanks to the Irish Writers Centre for a wonderful evening. 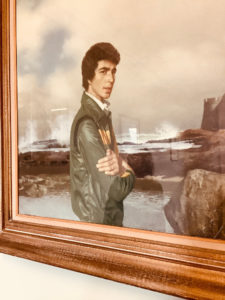 Shirley-Anne McMillan is an author of contemporary Young Adult fiction. She lives in Co Down with her family where she writes, tutors, and works in the local Integrated school as an Alternative Chaplain. Shirley-Anne's third novel, Every Sparrow Falling, will be published by Atom in 2019.

The Honorary Hunzo | Doctor Marten and his Sadist Shoes