A lot of people think that the fight for gender equality is unnecessary. Others think that certain human rights should be reserved only for men. Some people even think that supporting women in the struggle for full body autonomy is a futile gesture. But despite all of this misconception, disregard, and disrespect, we can assume that there are probably not too many people who associate these things with “cynicism.” We can guess that very few people describe them as “chilling.” We can sleep easy at night knowing that nobody actually considers the support of gender equality to be “cold-blooded.” Except we can’t – because someone does.

During a debate in the Seanad last week, Jim Walsh condemned RTÉ’s coverage of abortion related topics, claiming that the national broadcaster was ignoring rules regarding objectivity and bias. The former Fianna Fáil Senator supported complaints made by six members of the public concerning Radio 1’s the Ray D’Arcy Show, following an interview with Amnesty International Ireland’s Executive Director, Colm O’Gorman in June.

The segment, which discussed Amnesty’s #NotACriminal abortion rights campaign, was recently found to have breached the Broadcasting Authority of Ireland’s laws on impartiality, despite the show’s engagement with opposing opinions and pro-life discourse. The BAI deemed that the programme’s presenter articulated a “partisan position.” Jim Walsh declared that RTÉ were supporting an “abortion holocaust.”[pullquote]Walsh received backlash from just about everybody who recognises that the discriminatory, organised extermination of six million people is in no way comparable to the right of a woman to make rational decisions about her own body.[/pullquote]

Understandably, Walsh’s comments received backlash from just about everybody who recognises that the discriminatory, organised extermination of six million people is in no way comparable to the right of a woman to make rational decisions about her own body.

Following the Seanad debate, Labour Senator Máiría Cahill issued a statement in which she judged Walsh’s remarks “absolutely horrific” and “insulting.” While Cahill was careful to emphasise that everybody is entitled to have an opinion on the issue, she also suggested that “if we are going to have this debate we probably should behave in a responsible fashion around it.”

Senator Walsh is not the first person to use such insensitive language when speaking about abortion, and he certainly will not be the last. However, his comments do seem to reflect those of vast numbers of Irish politicians who are unable, or simply unwilling, to approach the abortion discussion with the competency and compassion it commands to be understood. 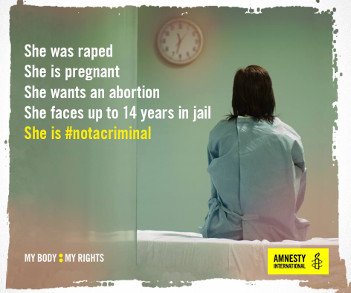 Contrary to all this “pro-killing,” “breach of the most fundamental human right of all” nonsense that people like Walsh will most likely continue to spout until the end of time, the pro-choice movement is not about taking life, but about giving it back. It’s not about “abortion on demand,” but about safe and legal abortion for anybody who needs it. The ‘fundamental human right’ that a lot of political parties seem to be ignoring is the right to choose. To assume that this discussion should be about anything other than women is not just insulting, it’s downright irresponsible.

Last month, the Labour Women Commission announced details of the legislation that could take the place of the Eighth Amendment if it is repealed. This new bill would permit legal terminations in cases of fatal foetal abnormality, rape, or where there is a risk to the life or health of the mother. Although the goal of abortion rights campaign groups and their supporters around the country is to ensure that every woman has access to abortion services irrespective of her circumstances – and that women’s bodies should be removed from the Constitution entirely – Labour’s proposed bill is a cautionary step in the right direction.[pullquote]To assume that this discussion should be about anything other than women is not just insulting, it’s downright irresponsible.[/pullquote]

Unlike their coalitional counterparts Fine Gael, repealing the Eighth Amendment does seem to be a core issue of concern for the party in the lead up to the next general election. It’s not free, safe, and legal abortion for everyone, but according to Senator Ivana Bacik, the proposed law “best expresses the will of the public.” After years of being told again and again that abortion simply ‘doesn’t happen here,’ and that being a ‘Catholic country’ somehow justifies thousands of forced pregnancies, real life political recognition of the reality that Irish women do actually get abortions is long overdue.

Earlier this week, findings from journalism project Detail Data specified just how many women had been forced to travel to avail of a common medical procedure their own country is unwilling to provide them. The data revealed that over the past five years, 24,599 women from both the North and South of the country made journeys to abortion clinics in England and Wales. Over 24,000 women. That’s almost 100 a week.

Amnesty International Ireland were quick to point out that the findings only reflect minimum figures, as many women choose not to disclose their addresses to UK clinics. The actual number is most likely a lot higher. Following the release of the data, Colm O’Gorman said that Ireland needed to stop turning a blind eye to the human rights abuses explicit in the laws it enforces.

(These laws) violate the human rights of women and girls, forcing those who can travel to go overseas and seek compassionate, professional care outside their own country (…) It’s time for governments North and South to end the hypocrisy of laws which criminalise women at home and don’t even meet their stated aim of preventing abortions.

O’Gorman’s response not only emphasises the severe lack of empathy existing in laws like the Eighth Amendment, but also the discrimination inherent in forcing women to travel overseas for terminations. “… Those who can travel” proves that there are those who can’t. Whether it’s due to financial reasons, health issues, or anything else that might hinder someone’s ability to make the necessary journey to the UK, for many, leaving home simply might not be an option. 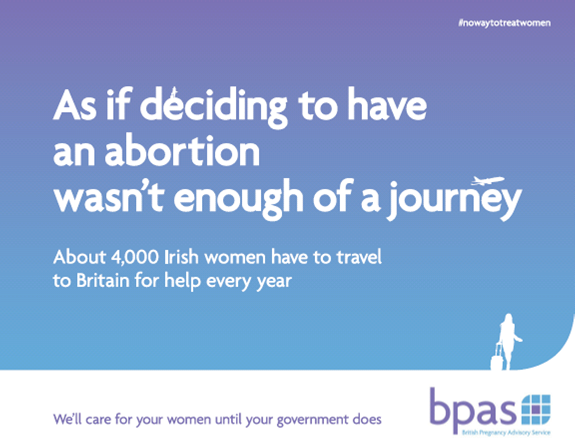 According to the IFPA, it costs at least €1000 for an Irish woman to have an abortion abroad. This figure does not take into account any loss of income the woman may suffer, the cost of aftercare treatment, or travel visas. BPAS, the British Pregnancy Advisory Service, offers a small discount of €80 to Irish women availing of their services due to the additional expenses they already face. While the organisation’s promise to “care for your women until your government does” has not been compromised, it is also yet to be taken seriously by a lot of Irish politicians.

Political parties need to stop ignoring the glaringly obvious human rights issue that directly and indirectly affects 50% of this country’s population. Almost 25,000 documented Irish and Northern Irish women have travelled to the UK for an abortion since 2010. Who knows how many others didn’t get the chance to make that journey.