A Seven Day Fast: Even the damp squib would have tasted good…

After preparing himself for a week of hell to raise money for the Capuchin Day Centre for Homeless People, Headstuff’s Michael McLaughlin found that his seven day fast wasn’t as difficult as he thought it would be. This leads to an interesting insight into our eating habits in Ireland today.

Editor’s note: HeadStuff does not encourage its readers to fast. If any reader is considering fasting, they should discuss it with their doctor first.

I was heading into battle, a psychological challenge that I had never experienced before. I had read many blogs about people’s experiences before embarking on my seven day water only fast and it sounded like pure hell. There was talk of vomiting, diarrhoea, temple crushing headaches, stomach churning hunger pangs and seesaw mood swings.

[pullquote] “If I am being honest I was a little disappointed by the challenge I had anticipated. I was prepared for a real struggle… [/pullquote]

When people ask me how it went, I feel my response is less dramatic then they expect. For the first two days I was pretty hungry, but nothing more extreme than if you missed your dinner one evening. It never intensified beyond that level and at no point was I even slightly tempted to eat any food. The mind is programmed to focus on change and anomalies, so when I missed my first two meals of course there was a lot of rumbling; my brain was trying to remind me that I normally eat at this time, alerting me to keep consistent.

Once you miss a few days this becomes the new normal for the body and the mind trusts that you know what you are doing. It also realises that perhaps there is a drought or scarcity of food and energy is better conserved rather than rumbling and growling, which wastes energy. If I am being honest I was a little disappointed by the challenge I had anticipated. I was prepared for a real struggle, but at worst it was boring and anodyne. A lot of daily pleasures revolve around the joy of food, going without meant days were long and uneventful but pain was never a part of it. Some people thought I would only be fit for bed, lazing around like John Lennon and Yoko Ono, that wasn’t the case.

I noticed on day two that my attention span, which is limited at best, had deteriorated to gnat like levels. I tried to write a few things, but lost my train of thought easily. I also got a head rush most times I got out of my seat, which would last 4-5 seconds and was a little unsettling at first, but I quickly accepted it as part of the process. I noticed my sense of smell was noticeably heightened. I cycled into town on the first morning and the smell of freshly baked bread seemed to waft from every street corner trying to lure me in. My theory is that when you go without food for a while your body switches to hunt mode and, to help you out, the body deploys extra resources to the senses. Heightened smell and hearing would have enabled better hunting in the past.

The first real challenge came unexpectedly on the third day. I agreed to meet a couple of friends at a local coffee shop for a cup of tea and a catch up. One of my buddies decided he was particularly hungry so ordered tortillas with guacamole and salsa to start off, and a burger with chips to finish up. We were sitting at a very small table, the aromas flowing from his plate smelled divine, he seemed to enjoy every morsel, even licking his fingers, but I stayed strong. I found it very hard to sleep that evening. I had read a lot about people requiring less sleep when they fast and this is definitely true.

I woke up on the fourth day feeling great. I did a bit of yoga and felt fresh and light. I drove out to Hawk Cliff for a swim in the sea and it was incredibly refreshing. It was a different experience than usual, I was feeling it more intensely, the cold got right under my skin and it took me a long time to recover. I did some more yoga later on and that evening I went out to a friend’s 30th birthday. This was the most unexpected part of the fast. It was day four and I was in a bar, chatting to people, full of energy and in good spirits. I had serious doubt whether I would be in a position to even attend, but I ended up staying out until around 2:30 and really enjoyed the night. 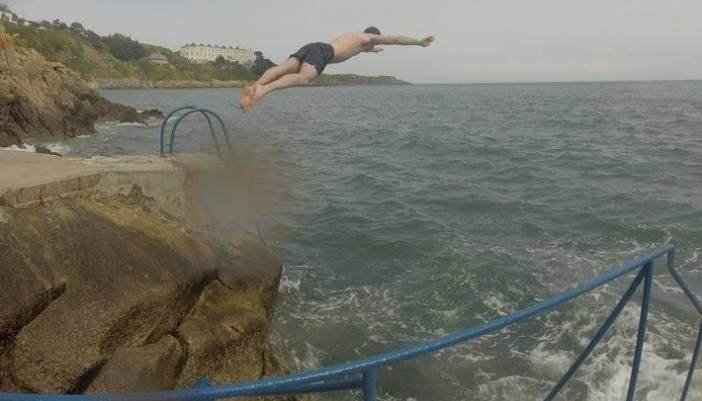 [pullquote] “I’m not going to lie, temptation levels were high and I could have had a wee chip when he looked away, but I stayed disciplined. [/pullquote]

My energy levels on day five were by far the lowest. I went out for a game of pool and within 20 minutes I had completely lost interest. My legs were heavy and I wasn’t in the mood for standing around so I cut the game short. Friend X, who appeared earlier on in the story, had another sudden onset of hunger, I wondered if this was a set up. He insisted we go to Eddie Rocket’s to accompany him for lunch. He gesticulated and the waiter arrived over. The order consisted of cheese and bacon fries, a hamburger and a bowl of onion rings, all washed down with a coke of course. I’m not going to lie, temptation levels were high and I could have had a wee chip when he looked away, but I stayed disciplined.

On the sixth day I went into town for the 1916 commemoration. There wasn’t a lot going on, the Waldorf Barbershop was cutting hair in old styles and Manning’s Bakery handed out little treats, the sun was shining and there was a mile long queue for the carousel, which I chalked down as another reason to avoid having children. I didn’t feel hungry at all at this point, in fact from day three the hunger mostly subsided but came in gentle waves. I did my best to stay busy so I didn’t have time to focus on the hunger.

The most exciting and animalistic part came just before the stroke of midnight on the eighth day. There are ‘strict’ guidelines regarding how you should break your fast. Juice for the first day, progressing on to vegetables, then over the third and fourth day meat can be reintroduced. I put water on the boil for my first meal and gently placed 4 tomatoes in the pot. Once they were cooked I cut a small piece and began eating. I ate it pretty quickly and it was tasteless. I didn’t starve for seven days for this, did I? So I put on some soup and while that was heating up I put on toast. Out of the corner of my eye I saw my Easter egg sitting in the corner of the living room. One piece won’t hurt, I thought. Wonderful cocoa goodness, it was like tasting chocolate for the first time, even the texture against my tongue felt nice.

[pullquote] “At this stage I considered ringing Dominoes, but somehow talked myself out of it. I betrayed the fast breaking code and I had a feeling I would suffer for it. [/pullquote]

While I impatiently waited for the soup to boil I made three subsequent trips back to the Easter egg. ‘Be careful about the insulin spike’ was still ringing in my ears. I couldn’t stop, the dam had burst. I opened up the fridge and noticed there was cheese. I grabbed some and lumped it on some crackers. I repeated this a baker’s dozen times until the soup was finally ready. The soup tasted wonderful, sweet potato, pepper and paprika. The only reason I didn’t pour it down my throat was because it was too hot.

I rummaged further and found some orange juice, which I gulped down from the bottle, there was no time to waste getting a cup. I spotted some tinfoil covering a plate, what could that be? It was a meringue pie. I took a small morsel and placed it back. Tantalisingly tangy, I broke up the tanginess with some more chocolate. ‘May as well finish the meringue, sure it won’t keep’, so the denial narrative went. I spotted some raw honey in the cupboard, my spoon excavated a large portion and it was down the trapdoor.

At this stage I considered ringing Dominoes, but somehow talked myself out of it. I betrayed the fast breaking code and I had a feeling I would suffer for it. I sat back down on the sofa and I felt incredible. A rush of energy coursed through my veins. There were also cautionary warnings about when to exercise post fast. I forgot about this when cycling home later that night and sped along as fast as usual, when I got home my heart was trying to escape my chest and I had a really bad headache. I don’t normally get headaches so it was a direct consequence of reabsorbing all the new found food and my fluctuating blood sugar levels.

All in all it was a worthwhile experience and I managed to raise €1,100 for the Capuchin Day Centre, a testament to the generous nature of people. I would recommend people test the waters with fasting after consulting a nutritionist. It’s a good way to reset your digestive dial, get back in touch with how you should actually be eating and to break the routine of emotional eating. Even if you try one day a week it’s a good way to give the digestive system a rest.

We are in a culture that eats mostly for emotional reasons and sustenance sometimes is only a side effect. I read yesterday that the World Health Organisation predicts Ireland will be the most obese nation in the world by 2030. That is really shocking and it’s clear to me that we are eating in a very illogical way. Our Government isn’t helping matters. It takes a curious mind to look beyond the low fat labels to unearth the hidden sugar content and most people will trust the misleading packaging. There is a good documentary called ‘Fed Up’ that reveals some of the horrible measures big food companies will deploy to trick you into buying their junk food.  We are surrounded by advertising and it’s terrible that food companies can use underhanded ploys to encourage young children to eat junk food and develop an addiction from a very early age.

There is definitely an obesity epidemic growing in this country and it’s time we each, as individuals, became more aware of the path we’re going down, because therein lies a long fused squib.

Poem of the Week |1| That time out back in Ardmeen

Seven Days In Hell: A Week of Fasting