A few days ago, when speaking on CNN’s ‘State of the Union,’ former Republican Vice Presidential candidate Sarah Palin stated that if people wanted to live in America, they had to “speak American.” Even though she was quick to correct herself by declaring “let’s speak English,” thousands of people around the world took to social media to criticise her policy on immigration, and to generally make fun of her. She trended on Twitter for a while, as many discussed ways to ensure that Palin learned how to speak English herself. One user called her “white trash,” while another suggested that she was simply “a joke.” 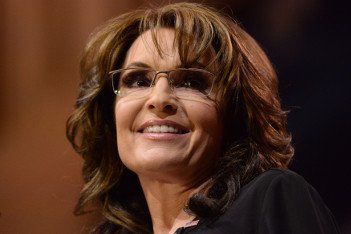 Listening to politicians spouting incomprehensible, hypocritical, and downright offensive nonsense is not a new phenomenon… And neither is laughing at them. Palin’s comment was ridiculous. It not only rejected her claim that Jeb Bush’s ability to respond to a Spanish question in Spanish was a good thing, but it also negated absolutely everything she was trying to say about the Republican Party’s supposed appeal to, and acceptance of, non-white Americans. It was laughable, and people laughed.

And why not? Palin’s not in the race for the Vice Presidency anymore, and she resigned from her role as Governor of Alaska in 2009. She’s not running for anything, so nobody needs to worry about her. Sure, she sold a couple million copies of her book, launched her own online television network last year, and continues to endorse candidates and provide political commentary for the likes of Fox News and… Fox News. Some people have become ever so slightly wary of her policies concerning energy, and oil in particular, but recently her right to ‘free speech’ through the constant repetition of harsh, discriminatory opinions have been predominantly viewed as just that – opinions.

How unfortunate then, that somebody who is actively running for a fairly significant political position in the States has been spouting similarly offensive, and even more racist, nonsense. Since the very beginning of his presidential campaign at the start of Summer, billionaire business tycoon Donald Trump has been consistently ridiculed for his tendency to make incredibly ludicrous comments about just about everything.

When asked about his views on Mexican immigrants, he suggested that Mexico be forced to pay for the construction of a massive wall along its southern border – lest all those “rapists” somehow find themselves on American soil. A few weeks later, he claimed that actual proof of Barrack Obama’s actual birth certificate wasn’t enough to prove that the current US president was born in America. When asked to provide a copy of his own birth cert, Trump produced a ‘certificate of birth’ from a hospital, which is not even an official birth certificate. He has also made insensitive and patronising comments about the Black Lives Matter movement – suggesting that a lack of police control has led to so many deaths in cities like Baltimore and Ferguson.

These comments, along with hundreds of other senseless things, have led to an influx of articles, parody accounts, and Buzzfeed quizzes (yes, really) detailing just how stupid most of what Donald Trump says truly is. And they’re right. Reading about ‘The 7 Most Ridiculous Things Donald Trump Has Said in The Last 2 Weeks’ makes people laugh. Twitter accounts comparing his campaign to one of his reality shows is funny. Trump’s saying awful things, everyone’s having a bit of a laugh, and nobody’s actually taking him seriously, so it’s fine… Right? According to SurveyUSA’s latest presidential polls, it isn’t.

On Labour Day, a nationwide election poll revealed that Trump defeated Hillary Clinton, Bernie Saunders, Al Gore and Joe Biden in speculative head-to-head matchups. The poll also showed that even though over half of voters in favour of Trump over Clinton were white, a surprising 25% were Black, and 31% were Hispanic. Suddenly, Trump’s race for presidency seems to have turned from an unimaginable joke to an almost horrific possibility. Even the Republicans aren’t too happy with his campaign strategies, with many representatives believing that his mistreatment of, and overt prejudice towards, minority groups is nothing short of “political malpractice.”

Malpractice or not, there’s no denying that the racist ideologies and policies of people like Trump and Palin are offensive, discriminatory, and in some cases, even harmful. In the interest of ‘fairness’ and ‘objectivity’ under the First Amendment, they have been granted platforms to be as bigoted as they like and – in Trump’s case – still be rewarded for it. But this veil of supposed unbiased impartiality masking a more sinister racist commentary is not just restricted to the States; it also operates in Ireland too.

Just this week, during a debate on the refugee crisis on Claire Byrne Live, several audience members walked out of the studio when it became apparent that the show was more interested in talking to people who made racist remarks about the refugees travelling from Syria, as opposed to those who actually want to help the cause. Solidarity group Cork to Calais were ignored during the debate, while the likes of Ian O’Doherty were allowed to claim that taking more refugees would be “cultural suicide.” Yet again, those acknowledging the struggles being faced by thousands of refugees are being accused of not caring about anybody else.

For all I know, O’Doherty and those like him could be out helping Ireland’s homeless and poverty stricken population every night of the week – and if so, good for them! But if they’re anything like the inconsiderate droves of Facebook post commenters that seem to think that one group’s plight is somehow more authentic than another’s – despite not actively doing a single thing to help anyone but themselves – then they shouldn’t get to comment. Standing in solidarity with refugees does not automatically erase any kind of solidarity with anybody else… And nor does shouting about ‘free speech’ give you the right to be a racist.

Ireland may not have its own Trumps and Palins to deal with, but that does not mean that the discourses they promote are all but void from our country. The likes of Identity Ireland might be the only Party willing to state that all refugees, immigrants, and general non-Irish people are inherently bad, but they certainly aren’t the only individuals who think it.

Claims like these are laughable. They have no basis, their advocates are (mostly) ridiculed, and yet, there are those who support them. Free speech exists to ensure that the public cannot be censored – not to permit structural racism, not to allow people to steal airtime from refugee solidarity groups, and certainly not to ensure that someone like Donald Trump can become president. If he does, we should all be very, very concerned…

Lenny Abrahamson – You’re Letting Me Down

From Space University to the Edinburgh Fringe Festival.

The Week on Twitter | Mariah Carey, Charles Manson, and the Alt-right