Civil partnerships came into existence in Ireland in 2010 under the ‘Civil Partnership and Certain Rights and Obligations of Cohabitants Act’. The first civil partnership was registered on 7th February 2011, five months later a survey revealed that only 7% of same-sex couples believed that marriage and civil partnership were equal.

The survey, which was conducted by Irish wedding website Mrs2Be, asked if Ireland will legislate for full marriage equality within the lifetime of this current Fine Gael-Labour Government, 55% of respondents said no. However, in this case they were wrong as Irish voters are getting set to vote on a referendum to allow same-sex marriage on 22nd May.

Many people who are currently campaigning for a No vote believe civil partnership is sufficient for same-sex partners and gives them enough rights. One no poster states: “We already have civil partnership – Don’t redefine marriage”. Last month, Keith Mills of the organisation, Mothers and Fathers Matter, said on UTV Ireland, “I personally, because I am a gay man, believe civil partnerships are a better way to recognise same-sex couples.” His reasoning for this was that 70% of marriages take place in a church and this still won’t  be available for same-sex couples and secondly, that their marriage would only be recognised in the minority of countries that have legalised same-sex marriage.

[pullquote] “There were very sad cases in the past where people simply did not have full rights. Civil partnership went some way toward addressing that, but not the whole way… [/pullquote]

Earlier this week on NewsTalk Breakfast Tánaiste Joan Burton said that civil partnership goes some way for couples, but she explained why it is not enough. “There are certain rights which go with marriage, for instance that the person they are married to, their husband or wife, is recognised as the next-of-kin… There were very sad cases in the past where people simply did not have full rights. Civil partnership went some way toward addressing that, but not the whole way,” she commented. 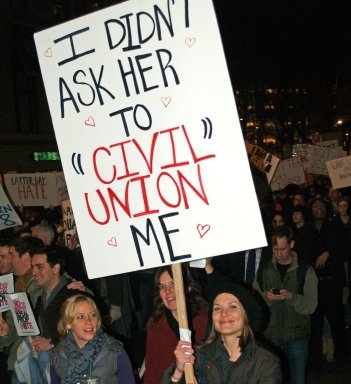 The ‘Missing Pieces’ report, which was put together by a team of legal experts over a year, highlighted a number of major differences between civil partnership and marriage, for example:

The report states in its concluding words: “The issue at stake is not simply that same-sex couples be given the right to marry, it is more than that. It is the fact that lesbian, gay, bisexual, and transgender people and their children are being treated as second class citizens, and that their right to equality and dignity are being compromised by the existing marriage ban.”

Is ‘Runaway’ by The Corrs the Greatest Song of All Time? Maybe…

The Art of a Yes Vote

The Week on Twitter: The Last Push for SSM & Nicolas Sarkozy Gets Trolled

The Week on Twitter: The Referendum, Dogs at Polling Stations & Star Wars Day