This week, #ShoutYourAbortion dominated Twitter’s trending topics. Amelia Bonow started the hashtag when she heard that the United States’ House of Representatives voted to stop funding Planned Parenthood for one year. She took to Facebook to state how grateful she was to have been able to avail of Planned Parenthood’s abortion services, and to debunk the myth that abortion is “still something to be whispered about.” It wasn’t long before Bonow’s hashtag, and her story, went viral; giving thousands of women around the world the opportunity to speak openly about their experiences, attempting to eradicate the stigma that is still associated with abortion. And they did. And people listened. 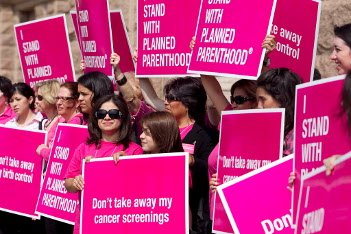 Some took it upon themselves to infiltrate the tag with their own anti-choice agendas, suggesting that these women had “nothing to shout about,” that abortion was “not something to celebrate,” and that it was “ruining the sanctity of life.” Those who (somehow) support the defunding of non-profit organisations like Planned Parenthood expressed similar nonsensical concerns. Unlike Ireland, America is a country that is willing to recognise that women do actually get abortions. However, according to the Senate Republican leaders that so joyously voted in favour of the bill, they shouldn’t be allowed to. “Defund(ing) Planned Parenthood (would) protect women’s health by funding community health clinics with that $235 million instead,” said Senate leader Mitch McConnell.

That’s fine, Mitch. Really. It’s fine that you can decide to deny people abortion services. It’s fine that you think you’re protecting women. Except you aren’t. And every single person who shared their story in the #ShoutYourAbortion hashtag confirmed that. It became not just about showing support for Planned Parenthood, but about rejecting the censorship and suppression of women from all over the world. It became about standing in solidarity with one another, and refusing to be shamed into silence. A conversation had begun, and all of those anti-choicers kicking up a fuss in the hashtag were powerless to stop it.

Over the past month or so, a similar conversation has been ongoing in Ireland. Comedian and actor Tara Flynn, and author Róisín Ingle, are among the ever-growing group of women who have so bravely chosen to speak about their abortions. Almost every day, another woman talks about her experience, discusses her need to travel, and confirms that having an abortion was the right thing for her to do. According to the Abortion Rights Campaign (ARC), 12 women travel from Ireland for an abortion a day. And as they refuse to be shamed to silence – as they choose to speak out – these women become more than a statistic. The unknown numbers of women who risked 14 years in prison to buy abortion pills online are no longer unknown. They are talking, and we need to listen.

Una Mullally so aptly hit the proverbial nail on the head when she said that no woman should have to “come out” about her abortion. In her column for the Irish Times, she said

Someone speaking about their experience is not a debate. It is a conversation (…) I am loath to suggest there is an onus on women in Ireland who have had abortions to join (Flynn and Ingle). Yet the power of the lived experience is one that cannot be argued with abstractions or dogma.

Some have criticised the honesty of these women, and movements like #ShoutYourAbortion, for being insensitive to those who might have been forced by somebody to terminate their pregnancy. Others were simply horrified that an actual woman could decide to further her career and live her life without having children first! There is no doubt that abortion is a sensitive issue – to some, given the circumstances of their personal experience, it may even be impossible to discuss. But to many it isn’t. Judging from all of the tweets, posts, and statuses shared over the last while, for many women it was a necessity. It was something they chose to do, and are now choosing to speak about. There is nothing selfish about doing what’s best for yourself, and there is definitely nothing damaging about erasing stigma.

When speaking about her campaign, Amelia Bonow declared that “the anti-choice movement is a war on women” – which it is. Those who like to think they are protecting women are doing nothing more than reducing them to untrustworthy vessels who are to blame for their pregnancies, who apparently don’t have the intellectual capacity to make decisions for themselves, and who aren’t respected enough to be given basic human rights. It seems obvious to say that a woman can be something other than a mother, but to many it isn’t that clear. Ireland’s anti-choice campaign prides itself on pictures of smiling women with babies strolling off into the sunset together. In 2013, their ‘vigil for life’ had a big pink banner declaring that they were all “pro-woman, pro-baby, pro-life.” Hey, anti-choice people – I can be all of those things too! I just don’t merge them all into one convoluted mess that overtly suggests that people who fight for the right to choose are murders, and that a woman’s only role on this earth is to have babies. We can do other stuff too, y’know?

It shows absolute and unadulterated bravery to choose to be a mother. To discover that you’re pregnant and to decide to have a child is one of the bravest things a woman can do. But it is also brave to choose otherwise. It is brave to travel abroad for a medical procedure. It is brave to return to a country that harshly stigmatises its women for making their own choices. It is brave to talk about abortion when so many people are so convinced that it doesn’t happen. It is brave to refuse to be silenced.

The annual March for Choice takes place in Dublin this Saturday September 26th at 2pm.