Conan O’Brien visits Cuba, but is all as it seems?

Last night Conan O’Brien became the first American late-night talk show host to broadcast a show from Cuba for more than 50 years. The aim of his visit to Cuba was to meet the local people and give an insight into daily life on the island.

In 1959 The Jack Paar Tonight Show featured an interview with Fidel Castro, but this was the last to be filmed there for 56 years as relations between the US and Cuba fell apart. After the island’s new revolutionary government nationalised American-owned properties in 1960, the US imposed an embargo on exports to Cuba. As tensions between the two countries heightened, this embargo extended to all imports in 1962 and then to subsidiaries of American companies based outside of the US in 1992. US fines for trading with Cuba also came into place for countries around the world.

The situation remained the same with no sign of changing until President Barack Obama announced plans to normalise relations and re-establish economic ties with Cuba last December. Conan O’Brien often travels as a part of his show (in 2013 he visited Ireland), but it was because of this amelioration of relations that the talk show host decided to film in Cuba’s capital city, Havana.

During his four day trip, he took part in everything Cuban: rum drinking, cigar making, salsa singing, rumba dancing and even Spanish lessons. As usual, Conan was a bit over the top and made many of the locals uncomfortable for comedic effect, but they were all good humoured about it. He did some impressive salsa singing, however his Spanish was atrocious, but that was okay because many of the locals had fluent English. He even managed to find an Irish tourist to speak to while he was there. 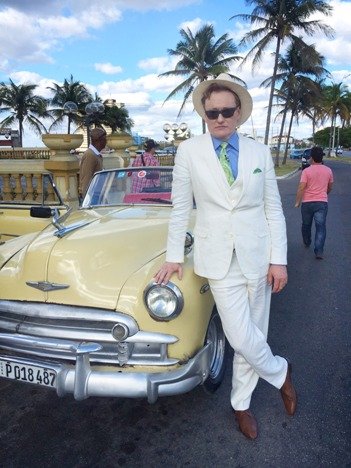 Overall the show was really interesting and gave an excellent insight into a country which usually only features in serious documentaries and news reports. Although the old fashioned buildings and antique Pontiacs make the city of Havana resemble a 1940s movie poster, otherwise Cuba does not appear to be too short of modern supplies. Conan in Cuba portrays the country in a very positive light; it appears to be full of life, culture and happy people. Conan O’Brien himself described the people as “vivacious” and said the city “is alive with music”.

This portrayal of Cuba may not be completely accurate as the show did not discuss any of the country’s difficulties. After President Obama’s announcement in December, Cuban President Raul Castro welcomed the news that the US wanted to develop relations and urged the US president to lift the trade embargo after more than 50 years of isolation for the island.

Dr. Guevara March, the daughter of Cuban revolutionary Che Guevara, came to Ireland in September 2012 and discussed the day-to-day struggles that Cuba faces, which are mainly caused by this embargo. Speaking through a translator for The Irish Trade Unions Cuba Solidarity Committee at Wynn’s Hotel, Dublin she explained that although US law allows for humanitarian donations to be given to Cuba, including food and medicine, these are the areas of supply that country struggles with most.

As a paediatrician at the William Soler Paediatric Hospital in Havana, she described the struggle to source medicine for the hospital: “Unfortunately eight out of every ten new medicines that come out every year have a US patent. New medicines are already quite expensive, but for Cuba to avail of these new medicines with US patents it has to pay five and sometimes up to six intermediaries. We have to handle this increase in price of a medicine that was originally quite expensive”. She explained how this can lead to unnecessary deaths in the hospital.

As for food, Dr. Aleida said: “Because of the blockade, we have to pay three or four times more for transportation, because according to the America’s Cuban Democracy Act of 1992, any vessel docking in Cuba is not allowed in any US port for the following six months”. According to the US Dairy Export Council, the US has largest supply of milk in the world, but despite lying only 130 miles from its shores, Cuba has had to import powdered milk from as far away as New Zealand.

An end to the trade embargo may also have benefits outside of Cuba. Companies who break the embargo and trade with the island would no longer have to suffer the consequences, which in the past has included huge fines. Last year, a Dutch travel company was fined $5.9 million in April, while French bank BNP Paribas received a record breaking fine of $8.9 billion in July. Dr. Aleida also claimed that a cure for lung cancer has been discovered in Cuba, so a lifting of sanctions wouldn’t only benefit Cuban patients.

“Medicine and food… this is why Cuba is fighting against the US blockade,” stated Dr. Aleida in 2012. For these reasons, Cubans hope that the embargo will finally be lifted in the coming months. Although, as Conan O’Brien notes, it is difficult to know what effect this would have on Cuba and there is the possibility that it could result in an invasion of American companies, resulting in Footlocker stores everywhere.

Conan O’Brien may not have been the perfect US representative to send to Cuba, but after watching the show he could certainly be a quirky diplomat if he managed to put down the cocktails. He didn’t tackle the difficult issues, but this has been done before. Instead, he gave the audience a feel for Cuba’s culture, heritage, lifestyle and people, which just happened to come across as a mini-paradise. It was a brilliant idea as many Americans must be curious to know what Cuba is really like, considering they are banned from visiting and a lot of propaganda surrounds the topic.

Posting on social media after his trip, Conan said, “I just spent the last four days shooting my show all around the city of Havana. I made countless friends and had one of the best experiences of my life. Many laughs, but that could also be the rum.”

Police Shootings Are Becoming All Too Familiar

TTIP: Trick of the Trade or Threat to Democracy?