In an interview with Italian magazine Panorama, which was published last Thursday, the two designers described children conceived through IVF as “synthetic”. In response to the interview, and in particular this comment, Elton John posted on photo sharing website Instagram calling their views “archaic”. The singer has had two sons with his husband David Furnish using IVF and seemed to be personally offended by the comments.  Elton John criticised the two designers, while defending the use of IVF by both straight and gay couples. He then finished his post by calling for a boycott on Dolce & Gabbana. 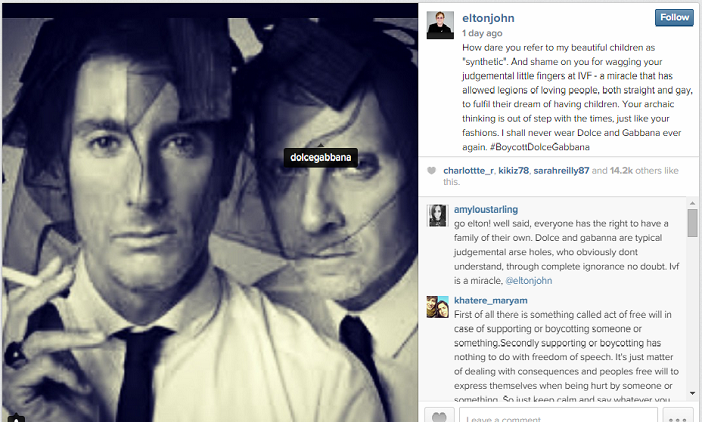 Dolce and Gabbana are both gay and were a couple for 23 years until they broke up in 2005. Despite their sexuality, the two men have a very traditional view of the family structure, saying in the interview that they oppose gay adoption. “The only family is the traditional family”, they said. On the subject of IVF, they commented, “Life has a natural course, there are things that must not be changed”.

The two designers, who believe that families should have a mother, featured mothers prominently in their catwalk show at Milan Fashion Week earlier in the month. The show’s theme was motherhood and saw toddlers take to the stage, as well as a heavily pregnant model.

Stefano Gabbana’s first response to Elton John’s scathing criticism was to post a photo of one of the brand’s mother-daughter themed looks, with hash tags #dgmamma and #dgfamily. But later, he posted a more aggressive response defending his freedom of opinion and comparing the singer to a dictator. He also referred to him as a “fascist” in an Instagram comment. 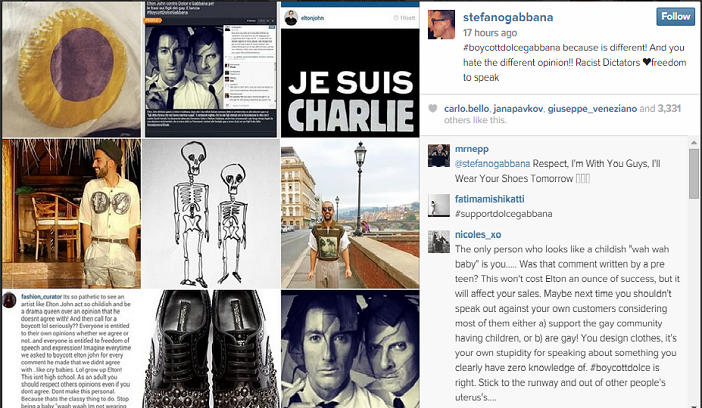 Since Elton John spoke out, social media has exploded and #BoycottDolceGabbana has been trending on Twitter around the world. So far support for the boycott has come from many, including celebrities like Courtney Love, Ricky Martin, Perez Hilton and Martina Navratilova. It will be interesting to see how much of an effect this incident has on Dolce & Gabbana’s sales.

Just round up all my Dolce & Gabbana pieces, I want to burn them. I'm just beyond words and emotions. Boycott senseless bigotry! #boycottD&G

Right on Elton and Davidhttp://t.co/qmORSvTnUe
My D&G shirts are going in the bin- don't want ANYONE to wear them