Over the weekend, a draft of Labour’s new election campaign poster was leaked to the public. We’ve all seen the poster. It’s everywhere. It depicts Fianna Fáil’s Micheál Martin and Sinn Féin President Gerry Adams as a newly married gay couple celebrating their wedding day, with left wing TDs Paul Murphy, Richard Boyd Barrett, Clare Daly and Mick Wallace hovering graciously in the background. The words ‘This is one marriage we should vote NO to this year’ run across the top of the ad, while the tagline ‘Vote Labour for a stable and balanced government’ appears along the bottom… Just below the wedding cake. 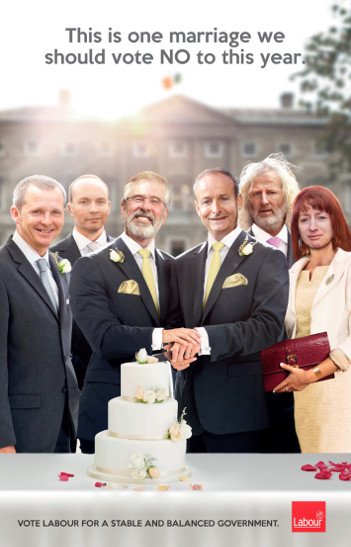 The poster’s intent is to criticise a potential coalition between Fianna Fáil and Sinn Féin following the country’s next general election this year. While Martin has repeatedly stated that he would not enter into government alongside Sinn Féin, Adams recently claimed that he would not rule out such an option. Since Adams’ announcement – and results from an Irish Times poll suggesting that Sinn Féin were on track to becoming the second largest party in the Dáil following the election – Finn Gael and Labour have taken it upon themselves to denounce any support the party might have gained over recent years, claiming that their vision lacks stability and would hinder Ireland’s development.

A spokesperson from Labour has claimed that the draft ad is attempting to convey just that. Supposedly, a coalition between the two parties would be nothing more than a “marriage of convenience” that would “destroy Ireland’s hard-won progress.” According to the spokesperson, the poster is using the success of the marriage referendum to make this point in a “humourous way.” According to lots of other people, it’s just insulting.

Following its release on Sunday, many expressed their disapproval of the poster online, citing it as distasteful, desperate, and downright offensive. Others suggested that the ad proved Labour were unfit for government, declaring that they had probably leaked the poster themselves in an attempt to promote the party before any official campaigning is allowed. Some people even cited the ad as homophobic, claiming that this direct attack on Fianna Fáil and Sinn Féin policies was an indirect attack on the gay community.[pullquote]According to Labour’s spokesperson, the poster is using the success of the marriage referendum to make this point in a “humourous way.” According to lots of other people, it’s just insulting.[/pullquote]

We can probably go ahead and assume that whoever made the poster is (hopefully) not a homophobic tyrant dedicating themselves to the systemic and parodical destruction of same-sex marriage in Ireland. However, it’s still not that difficult to see why the ad upset a lot of people. While it’s obvious that stability and balance are referring to the country’s current coalition – and Fianna Fáil’s and Sinn Fein’s apparent inability to sustain this stability – the poster’s contextual use of the marriage referendum does appear to suggest that some same-sex marriages are unstable. The insinuation that the figurative heterosexual union of Fine Gael and Labour is inherently better, without ever referencing any policies from any of the parties, remains apparent – whether intentional or not.

If a member of the LGBT community is offended by the poster, let them be. If a same-sex couple who has recently gotten married thinks the ad is an insulting mockery of a right they fought for years to achieve, they should be allowed to think that. There are plenty of people in similar situations who weren’t offended in the slightest. And while the intrinsically homophobic nature of the ad is still up for debate, and is still being debated, there is one thing we can probably all agree on – it was a pretty stupid idea for a campaign poster anyway.

Even if the ad is not causing direct offense to the LGBT community, and even if it’s not homophobic, it’s still an insult to the marriage referendum, and to everything that was achieved on May 23rd, May 22nd, and the months and years that came before. It’s bad enough that political parties are claiming responsibility for the victory of the Yes vote as opposed to giving credit to, oh I don’t know, the 1,201,607 people who actually voted Yes, but now they’re even using the success of the referendum to make cheap – and let’s be honest, painfully unfunny – jokes about the opposition.

Ah lads, seriously? I have to say I don't find this offensive in the least. Or funny. Though Mick is rocking the shirt & tie! #labourad

Negative campaigning is not some new phenomenon used only by the most desperate parties that’s got everybody in a bit of a frenzy. It’s used by everyone. They’re all desperate. The only difference is that negative campaigning usually only provokes a negative reaction from the opposing party – not from members of the public.[pullquote]While the intrinsically homophobic nature of the ad is still up for debate, there is one thing we can probably all agree on – it was a pretty stupid idea for a campaign poster anyway.[/pullquote]

And it usually works too. Back in 1964, Lyndon Johnson released this ad suggesting his opponent would indirectly bomb the US into oblivion. Similarly, around 2008 somebody composed this little number that compared Barack Obama’s then nominee opposition Hilary Clinton to Orwell’s Big Brother. Obama’s campaign team denied any affiliation with the ad, but it was still seen by millions before Obama won the nomination and eventually the presidency. As did Johnson.

That’s not to say that Labour’s weak, cheap, and poorly photoshopped attempt at a humourous anti-opposition campaign will garner a fraction of the response that those ads did. Who’s to say that the poster will even sway that many voters’ opinions, whether for or against the party? Right now, all we can be certain of is that it was stupid, it pissed off a lot of people, and that – even though the party claim to have six other draft ads in the making – the one where Micheál Martin marries Jerry Adams is the only one anyone’s going to be talking about.

The Week on Twitter | The Merrion, Biden Memes, & Ricky Martin