Expo 2015 just started this month in Milan, Italy. It will be run for six months, until next November, involving 145 countries, 13 NGOs and three international organisations.

The event takes place every five years since 1851. The first world’s fair was at the Crystal Palace in London, although the most famous one was organised in Paris in 1889. On that occasion the Eiffel Tower was built, being now one of the biggest tourist attractions in the world.

This year’s theme is ‘Feeding the planet, energy for life’. It’s a very urgent and important issue for the modern world. It will be developed in different branches, from renewable energies to famine in poor countries. 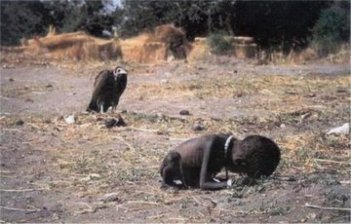 We still have about one billion of the world’s population suffering from malnutrition, but we are so used to these statistics that they don’t affect us anymore. More than twenty years after Kevin Carter’s famous Pulitzer Prize-winning photo, the world is still the same. The picture, shot in Sudan, depicts a vulture waiting for a starving child’s death.

“The 2015 World Expo offers a chance to mobilise public opinion around the pressing need to make the eradication of hunger and malnutrition central pillars of the global development agenda”, declared FAO (Food and Agriculture Organisation of the UN) Director-General José Graziano da Silva. He also highlighted the need to reduce food waste, which affects one third of all food produced today.

UN Secretary-General Ban Ki-moon will visit Expo on October 16th. He will receive the ‘Chart of Milan’, a document stating some international targets about sustainable development. It will be subscribed to by countries participating at world’s fair.

Ireland will be among these states. The Irish pavilion’s theme is ‘Origin Green Ireland: Working with Nature’. Agriculture, Food & the Marine Minister, Simon Coveney, previewed it in March, congratulating the Office of Public Works for the pavilion’s design, “The use of wood with its low carbon footprint, is in harmony with the sustainability ideals of the Expo and provides a good framework for the visitor experience, which will focus on Ireland’s long-established farming tradition…”

Demonstrations against Expo did not lack. It is easy to assume that thousands of starving people could have been saved with the amount of money spent for the fair’s organisation, which is tens of billions of euros. An organisation, which involves many big businesses, focused on famine and the waste of resources: that’s quite a paradox. On the other hand, many consider it as an investment for the future world, because it aims to increase people’s awareness of the need for sustainable development.

A similar debate arose about the above mentioned photograph: is that image ethical? Would it have been better to save that one child, or to send an outcry of testimony around the world?

Let’s see what happens in the next six months, hopefully Expo will leave a footprint in the way of a fight against starvation and eco-friendly development.

Valentina is an Italian girl with a deep passion for travel and literature. She is driven by an insatiable thirst for knowledge which leads her to new horizons every day. Her academic studies have been focused on communications.

Film Review: The Age of Adaline – The Curious Case of Blake Lively

Here’s Why You Should Enter The Lacomic Cup

The Price of Working for Free