I Am That Witch: Tara Flynn on Ireland’s Outdated Abortion Laws

It’s a few years since anyone was burnt at the stake in Ireland. There was that poor woman who haunts half the properties in Kilkenny, but since she went up in flames, you’re not really supposed to do witch hunts anymore. We’re much more civilized now, even if we suspect someone has a devotion to crystals and more than one cat.

But if you ever want to rouse a baying mob, howling for your blood (and come on, who doesn’t love that?) there is one last thing you can do: say the word “abortion.” Even better, mention that you’ve had one. Some people won’t be long dragging you to the village square for a good old fashioned shaming. I should know. I am that witch.

Of course, instead of village squares these days we have the internet, and with it everyone’s presumed entitlement to have their say or a right old go. Thankfully, it turns out that’s only a tiny part of the picture. But I’ll come back to that.

Recently, I’ve told my own story of having had an abortion. Abortions themselves aren’t news in Ireland: even though they’re all but illegal (you have to say that, although in practice the legal framework pretty much prohibits them completely), we all know someone who’s had one. It’s a common procedure. Not a pleasant one – a crisis pregnancy is the furthest thing from pleasant you could imagine – but definitely common. And simple. The decision leading to it isn’t straightforward, but the procedure is. Reaching that decision is one of the hardest things many people ever have to do, but once their mind is made up and they’ve explored every option, sometimes termination is the only way for them. If they could only access it legally and safely…

So I decided to tell my story, in an attempt to give a human face to the abstract numbers (12 each day) and demonization of people who make this choice. You know what’s the craic? When anonymous eejits react to your crisis pregnancy with such wisdom and compassion as “Why not close your legs, slut?” or “If you didn’t want to get pregnant, shoulda used contraception, ya thick bitch!” Oh boys, THANK YOU. Why didn’t I think of that? Because we all know contraception always works. You know, mostly it does. I’ve been sexually active for a loooong time now (I’m very old) and pregnant only once. I know about contraception, thanks for ‘splainin’. Actually, on this occasion I’d taken a morning after pill. Yes, it can happen, Judgey Judgerson. Still feeling cocky?

The most judgemental voices – the lads and lassies leading the shame posse, torches aflame – tend to be those who’ve literally never thought about what they (or someone close to them) would do in that situation. FYI, you simply can’t know until you’re in it. I didn’t. But the statistical likelihood is that someone close to them has been in this situation, “gone to England” and “sorted it out” and never told. Some people don’t even tell their mums. Ever. Especially if their surname is Judgerson. 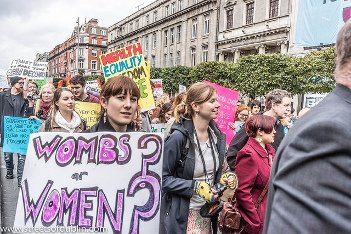 I mentioned that shaming was only part of the picture. When I decided to tell my own story and stand with the people having to travel, as well as the many more forced into horrific situations at home, I had a secret hope that times had changed. For all the bitchwhorekillersluts-slingers out there, or those gleefully challenging me to “debate” the most personal aspects of my life, there was so much more love. Support. My inbox flooded with people’s own stories. Finally, we know each other when we meet. We nod. “I know.” Hundreds of thousands of us. And we’re sick of being called criminals by our own country, or having our constitution declaring us equal to a fertilized egg.

I MCed the March for Choice this year, as I have before. But this time, with full disclosure. There I was in the village square, warts and all. But nobody set me on fire. Not a torch in sight. Thousands more than ever before publicly raised their voices in support of their sisters, mothers, friends and wives. Something has shifted. Something has unstuck. The witch hunters may still be out there, but my feet? My feet haven’t even been singed.

Tara wrote “You’re Grand: the Irishwoman’s Secret Guide to Life” (Hachette Ireland) and “Giving Out Yards: the Art of Complaint, Irish Style” (Hachette) is in shops from October 15th.

Tara Flynn is a writer and performer. She lives in Dublin with her husband, a dog and a cat and she appears regularly with Dublin Comedy Improv. You're Grand: the Irishwoman's Secret Guide to Life (Hachette Books Ireland) was an Irish bestseller. Giving Out Yards: the Art of Complaint, Irish Style is in bookshops from October 15.

Film Review | The Walk – A Remarkable Event, an Unremarkable Film?

Private: Celebrity – From Z-List Up

Private: Wax On, Wax Off