With a backdrop of exquisite costumes, ornate buildings and stunning landscapes, Arabian Nights, Pasolini’s 1974 film, portrays the ancient Ottoman world through several linked stories involving precariously innocent relationships and ready cruelty. Transition from nomadic tribal existence to modernity in 1916 Hijaz is explored in the charming 2014 film, Theeb. Survival was paramount for inhabitants of this hostile terrain.

In Arabian Sands, Oxonian Wilfred Thesiger described his close encounters in the 1940s with desert dwellers travelling through the Empty Quarter of Arabia, where the oil countries of the United Arab Emirates, Saudi Arabia, Oman and Yemen subsequently sprawled. For Thesiger, the book was “a memorial to a vanished past, a tribute to a once magnificent people.”

Generations of Arab learning and culture have strongly influenced scholarship and progress throughout the world. Before Mohammed founded Islam in the seventh century – along with a state run according to Allah’s sacred laws – no central government or public services had existed. Differences were settled by internecine war until Arabs were thus finally united.

Syria, Palestine/Israel, and Iraq are located in the Fertile Crescent, bordering both the Empty Quarter and the Mediterranean. This Middle-Eastern site includes the territory that the militant Islamic State network, ISIS/ISIL, covets and now largely controls, including the cities of Raqqa in Syria and Mosul in Iraq. ISIS plans to restore the Caliphate and fulfil scriptural prophecies. Somewhat like Jews and nations did, they demand their own homeland.

Graeme Wood delved deeply into this disturbing Islamic movement for the March 2015 issue of The Atlantic magazine, unpicking the ideology with the help of informed and insider interviewees. Abu Bakr al-Baghdadi was nominated ISIS’ Caliph in 2014, and he made a speech that July rallying all Moslems to dutifully swear baya’a, or allegiance, and join them in jihad, vanquishing infidels. The last Caliphate’s rule ended in Turkey in 1925.

Heeding the call, a steady international influx of volunteers and natives are prepared to act literally on early Moslem texts and revive medieval traditions. These Jihadists have declared war on unbelievers, the undeserving kuffar. Judging people’s sins under the doctrine of takfiri means that Shia and other nonconformists from the umma, Moslem community, are also condemned to punishment. The world can only be purified by executing all these apostates, although Christians who submit to the new order may be spared if they pay a tax, jizya.

ISIS’ English-language propaganda magazine is named Dabiq, after the Syrian city near Aleppo that is central to their campaign. On these pastures, based on predictions made by revered fore-fathers, the al salaf al salih, crusader armies will come to wage terrible battle on the Day of Judgement only to be defeated by mujahideen soldiers as the world ends. Any negotiation for peace would get in the way of this glorious finale that is integral to a radical version of Islamic Sunni faith, close to Salafi creeds that elevate martyrdom.

Integral philosopher Ken Wilber articulates the co-existence of all levels of human development today. ISIS’ practices of slavery, beheadings, amputations, and so on, as detailed in the Koran, ignore changing conditions over centuries: every utterance of Abraham, Moses et al, seems to remain valid for members. Their greater butchery in battle stems also from Al-queda training in Afghanistan, with Saudi funding, and fall-out from the Iraqi invasion in 2003.

Was Bertrand Russell right when he wrote, “Fear is the basis of religious dogma”? And is the result, he could have added. A technology of thought becomes a heuristic for revenge, ‘killing in the name of.’ In the reconstituted Shiite-dominated Iraqi government, Sunni incumbents were kicked out without income or arrangements, left to their own devices and disenfranchised rage. The ISIS banner of organised religion afforded them a cause, a means to regain dignity and repay their enemies. They may not be well armed or fully able to follow their bark with their bite, but still, injustice generally breeds the bad behaviour seen so far.

The US Defence Intelligence Agency, in their hastily-shelved 2012 report, warned about the likelihood that an Islamic state would be established by terrorists in Iraq and Syria under cover of civil war mayhem. On the scale of terrorist risk ISIS is a serious threat but, as Alan Bennett recently pointed out, almost 300 terrorist attacks have already occurred around the world this year. ISIS is responsible for about a third. Others also preach hatred. 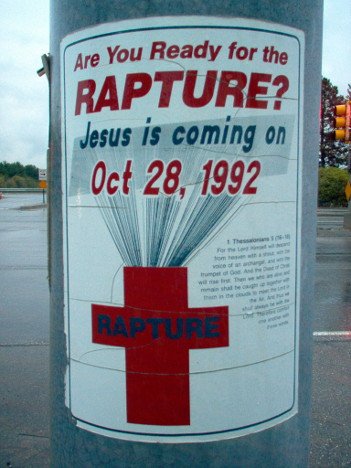 Not surprisingly, after the Paris attack, Donald Trump called for mosque closures and religion identity cards. Other fundamentalist Christians verbalise rejection of ‘sinners’ in US Bible belts and beyond. Millions of Western Rapturists, heeding 1 Thessalonians 4, eagerly await Doomsday to be lifted up into the heavens by Christ while the unfaithful are unmercifully annihilated. ISIS also expects Jesus Christ to appear and defeat the foe during their putative apocalypse. Their theological coherence falls down completely here, as the New Testament calls not for strictly-enforced Torah or Sharia commandments, but for new conduct embodying love, peace and nonviolence. That Jesus, who taught the Kingdom of God is here and now, and within, would be disgusted and give them a piece of his mind.

The Tragedy of Liberation, Frank Dikotter’s book about the rapid advance of the Communist Party of China which wreaked awful suffering, could also apply to what ISIS think they are doing; even as their often well-educated subjects leave, preferring to become vulnerable refugees elsewhere, the women unwilling to be treated as chattel. It’s an old story though: terrorist versus freedom-fighter. George Washington led troops to oust the British occupiers. The French and Russian Revolutions upturned the status quo. Padraig Pearce drew on a narrative of noble blood sacrifice to inspire the 1916 uprising in Dublin.[pullquote]ISIS’ practices of slavery, beheadings, amputations, and so on, as detailed in the Koran, ignore changing conditions over centuries: every utterance of Abraham, Moses et al, seems to remain valid for members.[/pullquote]

Noam Chomsky deduced that when rulers create ‘unpeople’ such as Palestinians living in the open-air prison that is Gaza, and ‘unhistory’ suppressing rights and voices, there is resistance. He also deems the unstoppable imposition of capitalism, with its inequalities and almost religious fervour, to be “radically incompatible with democracy.” People who feel powerless with nothing to lose readily risk their lives in the hope of something better.

Pure Torah/Old Testament or Sharia edicts alone jar with a diverse humanity living in freedom and harmony under an agreed rule of law. However, Arabs have long had the West bending laws and cosying up to them for oil and other strategic deals. When they don’t play along they’ve endured the holocausts of Shock and Awe bombardment and other crusading invasions. The West has trained and armed opponents of self-willed Eastern authorities for civil war, to fight violence with violence in video-game-like calls of duty.

The anthropologist, René Girard, developed a theory to explain mankind’s perpetual conflicts. Mimetic desire means that people want what other people cherish and own; that’s what they’ll fight for. They cannot help imitating other’s behaviour, so that without firm conscious intervention, proximity to conflict blindly engenders more.

Girard also noticed that myths focus on collective violence, whereby persecution of scapegoats, the sacrifice of innocent victims, unifies the society. Perpetrators have to fabricate blame and excuses to justify lethal competitive urges. Extremism is difficult to tame without insight. Any opening to facilitate a stand-down and compromise is unlikely unless preceded by self-examination on all sides as to motives and values, and willingness to talk.

In The Life Of Brian, the People’s Front of Judea are comically pitted against the Roman Empire, and though Biggus Dickus, the pompous Roman legate with a lisp, unfeelingly sentenced men to punishment and death, his guards snigger helplessly at his impotent pronunciation anyway. Reliefs like this from the prospect of domination abound in Monty Python’s film, which shows the follies of fanaticism, the desperation for attention and a saviour, and the destruction of life in the process of pursuit. If the ISIS activists are not messiahs, perhaps they’re just very naughty boys.

Caroline Hurley is composed of neutrinos, tiny particles, 10^-24m in size, generated by the nuclear reactions that make stars. She is one of the 7,383, 362, 500 members of the species, Homo Sapiens, which in turn figures amongst the 8,700,000 species on planet Earth, that is floating in space along with trillions, 10^24, of other planets.