Remember Kesha? Of course you do. She’s that multi-award winning, glitter-loving, animal rights-supporting, LGBT activism-doing pop singer. Way back when, she had that Tik Tok song that everyone loved, and that album that seemed to be playing everywhere. She used to have a dollar sign in her name as an ironic representation of the exuberance associated with celebrity culture, before she dropped the symbol because it had become too stylised.

She did lots of nice things for people including countering the vilification of female sexuality, becoming an ordained minister, and making a Pitbull song sound good. So, what has Kesha been up to lately? Apart from suing her producer Dr. Luke for sexual assault, battery, and emotional and physical abuse, she hasn’t been up to a whole lot – because she can’t. According to Universal Music, the lawsuit has effectively ended her career.

If you’re not familiar with the story, here’s what happened. In 2005, Dr. Luke (otherwise known as ‘Lucasz Sebastian Gottwald,’ or ‘that guy who has probably been involved in the production of just about every pop song on the planet’) signed Kesha to his Sony partnered record label, Kemosabe. A few years later, she released an album and a companion extended play, toured all over the world, and did fairly well for herself.

Following the release of her second album in 2012, Kesha expressed concern for the scope of her artistic growth beneath Luke’s label, stating that she had no control over her image or the music she released. Before she entered rehab to receive treatment for an eating disorder, Kesha’s mother publically announced that she hoped her daughter would be dropped from Kemosabe. A few months later we all found out why.[pullquote]According to Kesha’s attorney, Dr. Luke had forced his client to take what he called ‘sober pills’ – which turned out to be the date rape drug, GHB.[/pullquote]

In October 2014, Kesha filed a lawsuit against Dr. Luke for repeated sexual abuse, forced drug use, and for triggering her decade long struggle with bulimia. According to Kesha’s attorney Mark Geragos, Luke had been emotionally and physically manipulating his client for ten years; consistently threatening her family, calling her a “fat fucking refrigerator,” and forcing her to take what he called ‘sober pills’ – which turned out to be the date rape drug, GHB.

Speaking to Rolling Stone, Geragos declared that the suit was as much about Kesha reclaiming control over her personal autonomy and freedom, as it was about her career. His condemnation of Luke’s engagement with “horrible acts of abuse in an attempt to intimidate an impressionable, talented, young female artist into submission” should have rung just as many alarm bells for the music industry as it did for everyone else who recognised that rape and sexual abuse were not things to be trivialised. Except it didn’t.

And naturally, all of this is Kesha’s fault.

Why couldn’t she have been satisfied producing music for somebody who regularly emotionally manipulated her? Why wasn’t she smart enough to keep her mouth shut for another ten years while one of the most powerful men in the music business abused her for his own personal gratification? Why didn’t she just stay silent?

Of course Dr. Luke has been more than happy to actively involve himself in this sordid practice of victim blaming. Following the announcement of his countersuit, a spokesperson for the producer stated that

If Kesha now regrets that her career is mired in legal proceedings, it’s entirely of her making. It was Kesha who chose to file a lawsuit falsely alleging abuse to gain advantage in contract negotiations.

Sure, it is entirely of Kesha’s making that somebody drugged her, raped her, and is now holding her under contractual obligations she can neither commit to nor free herself from. It is definitely her fault that her image of excess and overt sexuality is now being used against her – not only to slut-shame her into submission, but to suggest that she probably just made the whole thing up in the first place! 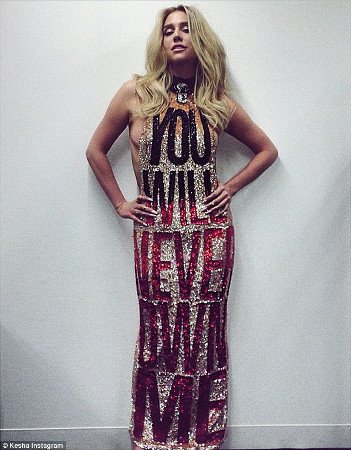 Some articles using Kesha’s allegations to confront the music industry’s gross misconduct of female artists (like this one here) have been criticised for formulating a conclusion before the disclosure of a verdict. Others have taken a more traditionally heinous approach, and simply suggested that Kesha – like all women who speak out about sexual abuse – has ruined the life of another innocent man. Like the myriads of sexual abuse victims around the world, she is guilty until proven innocent.

The media has been awash with complaints of supposedly false rape allegations for some time now – and with them, comes the truly abhorrent discourse of “crying rape.” ‘Girl who cried rape after threesome with two soldiers has been jailed’ reads one headline. ‘My son’s life was ripped apart by a woman who falsely cried rape’ reads another. According to the Guardian, the Daily Mail has used the term “cried rape” in 54 articles this year alone. As a phrase, it is not only extremely discomforting to anybody who might be considering speaking out about their sexual abuse, but it is also highly redundant. To suggest that somebody “cried rape” is to undermine the psychological and physical effects of the attack. To speak about ‘the girl who cried rape’ is to conform to the idea that unless you have undeniable proof that you were in fact assaulted, nobody will believe you.

Thankfully, society is not entirely devoid of good human beings, and lots of them have been actively creating dialogues about rape culture, and promoting sexual consent. Last month, the Dublin Rape Crisis Centre launched the Ask Consent campaign, which advocated for the explicit presence of consent from both genders prior to sexual intercourse. Similarly, Louise O’Neill’s ‘Asking For It’ has been occupying the shelves of just about every bookshop’s bestseller section since its release. If you haven’t read it – or you’re not quite sure what rape culture is – I suggest that you go ahead and read it. Some people have described it as harrowing, which it is, but it’s also painfully familiar, and entirely necessary in understanding society’s insistent need to blame the victim.

Just this week, a picture of University of Warwick student George Lawlor went viral. The photo – in which Lawlor bluntly emphasises his own ignorance regarding rape culture – shows him holding a sign saying ‘This is not what a rapist looks like.’ Lawlor made the sign and posted the photo after he was invited to a consent training session on Facebook, claiming offense that he – a young, straight, white, Conservative, male in college – would have to be taught not to be a rapist. He called the invitation a “bitchy slap in the face,” and stated that if somebody wanted to demonise all men and brand him a rape apologist at the same time that was absolutely fine.

Which brings us back to Kesha. Dr. Luke certainly wasn’t a masked madman lurking in the shadows waiting to pounce every time her back was turned.  He was one of the world’s most successful producers… And he still is. Regardless of the lawsuit’s outcome, he’ll still be able to keep making music, signing artists, and doing whatever he wants with his female musicians. And Kesha? She won’t.

She spoke out against her industry’s treatment of women and they told her that her career was over. She attempted to remove herself from a manipulative relationship and she was blamed. She sued someone for raping her and she was branded a liar. Even if Dr. Luke is found guilty, he – like all the other rich, powerful, successful men in the world – has already won.

Irish Students Are Taking Consent Classes Into Their Own Hands