Mental health has become a prominent topic of discussion in recent years – and about time too. There is probably nothing more important than discussing mental health and reaching out to your friends, family or like-minded individuals on the Internet, in an effort to get support and advice. However, a few weeks ago I happened upon an article (or a listicle, if you will) entitled ‘5 Signs You Have an Anxiety Disorder,’ and it’s been playing on my mind ever since. Below is a handy four-part listicle on why listicles cannot diagnose you with anything, and why using the correct channels for getting a diagnosis and help are incredibly important. One of the myths surrounding mental health is that an individual can go to their GP, walk away with anti-depressants or anti-anxiety medication, and their mental ailments will essentially be ‘cured.’ This myth is called a myth for a reason – because it is simply not true. This myth is also called a myth, because it can be deconstructed quite nicely, in this handy listicle below.

1. A listicle has not got a medical degree

The process of being diagnosed with anything – depression, anxiety, mood disorders – has to officially come from a psychiatrist. They help you fill out questionnaires and scales and do an in-depth exploration of your symptoms before they come to a diagnosis. A psychiatrist has a medical degree, and has gone through years and years of grueling training. With the aid of the Diagnositic and Statistic Manual of Mental Disorders – which is a universally accepted and standardised manual that psychiatrists use as guidelines for a diagnosis of any mental illness – a psychiatrist will be able to tell you what it is you have, and advise you on appropriate treatment. A listicle does not have the ability to do any of these things.

2. Reading a listicle on mental health is probably as effective as Googling ‘why do I have a headache.’

On one hand, it may be useful for an individual to have a basis to believe they have some sort of anxiety disorder. On the other hand, the article I am using as an example was poorly researched and lacking in clarity. A person can very easily suffer from what is known as ‘co-morbidity,’ where their symptoms are actually the product of two separate disorders or illnesses. Disrupted sleep, for example, is also a symptom of depression. And of Bipolar Disorder. And of Disruptive Sleep Disorder. Just as it is very difficult to self-diagnose and isolate symptoms, it is very easy someone to overlook, or ignore, aspects of themselves which may be symptomatic of something far more complex. An individual might think that they have anxiety or depression, and be correct; but may find that either or both of those are just a symptom of a much more complex disorder.

Similarly, reading an article about signs of any kind of disorder is probably about as effective as Googling headaches or any other sort of minor ailment. By now, everyone knows that Google firmly believes each and every symptom a person has is probably cancer (Google is wrong). It’s far too difficult to know exactly what to look out for when it comes to any sort of mental illness unless you are a trained mental health professional. Something a listicle is not.

3. Telling your GP you have an anxiety disorder can do untold damage

Okay, that may be slightly dramatic. Except it isn’t. The current belief appears to be that people coming forward with depression and anxiety disorders have gone to their GP, told them they thought they had depression or anxiety, taken a six month repeat prescription for anti-depressants or anti-anxiety medication, and gone on their merry way to recovery. This is not only inaccurate, but it’s downright wrong. 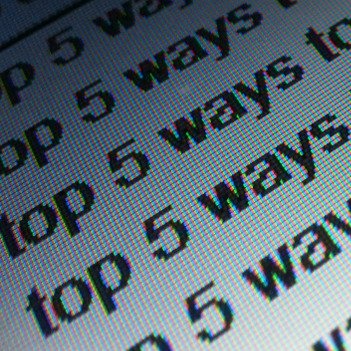 Lately, there has been much talk of the dangers concerning anti-depressant medication; citing the largest risks as suicide and the worsening of symptoms. While this is not totally wrong, there is far more to it than that. There are risks to absolutely every medication. If you were to open and read the information leaflet enclosed in a twelve pack of Panadol, usually the last warning on the possible side effects list is death. Side effects do not get worse than that. But in the case of anti-depressants (which often double as anti-anxiety medication too), anxiety and depressive symptoms can not only worsen but become extremely exacerbated. In some cases, they can even act as a trigger for Bipolar Disorder – or other conditions like Borderline Personality Disorder, which traditionally cannot be treated with conventional medication.

There is no way to undo the damage that taking unnecessary medication can cause. This is not a case of scaremongering – rather, it is a means of raising awareness about the potential dangers associated with anti-depressants. Your GP is not a mental health specialist. In fact, for some time, it has probably been common practice to issue general prescriptions for mental illnesses in the same way that a GP would prescribe general antibiotics for an undetermined infection. Mental illness cannot be treated in the same way as a physical ailment. They are usually far more complex than that, and require more attention than a ten minute doctor’s appointment would allow for.

4. Listicles rarely tell you what to do once you’ve acknowledged that you might have an anxiety disorder

In the event that these lists are helpful to anyone, there is no afterword. There is no “okay, now you know this about yourself; here’s what you should do next.’ Fortunately, the end of this listicle will be rife with advice on what to do next. Generally speaking, if a person feels they are of ill mental health, they are probably correct. Only an individual can know well enough what’s right and what’s wrong with themselves.

So what next? Go to your GP. Ask them to refer you to your local mental health services (yes, they exist). The referral appointment may take up to a few weeks, so if you feel at risk of harming yourself, ask for information on free services that may be able to see you in an emergency. Samaritans have an emergency helpline. Pieta House will try to see you as soon as possible if you are at high-risk of suicide or self-harm. And if you feel really, really, really bad – call an ambulance, or get someone to drive you to A&E. Your GP will also be able to advise you on the various counseling and psychotherapy services in your area, or of ways to find a suitable therapist (IACP.ie has a full list of accredited psychotherapists in Ireland). They will also be able to provide you with documentation that you might need for missed time in college, school, or work due to your illness. The channels for help are available, and do not end, with your GP – he or she is the gateway to improving your mental health.

To return to the initial point of this listicle: an accurate, safe diagnosis takes time. Keep talking about your mental health, and keep looking after yourself – but use the right channels. Recovery or treatment is not just about taking medication. Sometimes it’s necessary and sometimes it’s not, but a psychiatrist will be able to work with you to determine what sort of treatment is the most suitable for you.

This is something that listicles most certainly cannot do.

Courtney Smyth is an aspiring author with half a psychology degree and a wholehearted dislike for badly made tea. She can often be found hiding in her room writing and pretending under-researched opinions don't exist. You can find her other writings here: https://aseriesoferraticism.wordpress.com/

Blue Monday | The Compound Problem of Suicide and Victim Blaming

‘Watch Your Language!’ : A Guide to Using Mental Illness Terminology…