It is just the monotony of life. We are into our third lockdown, and it feels like it is simultaneously our first, yet somehow also our fifth. Time is standing still, but life is passing us by. The last social interactions we may have had were underscored by guilt and trepidation. What should be familiar and comforting seems strange and just slightly off, like putting on someone else’s underwear… I would imagine.

Some days I catch my expression in the mirror. It can be akin to a bag of tits that fell out the back of a moving van. The futile, false equivalences of Social Media seem even more potent as my screen time goes through the roof and my self-esteem, the floor.

People are dying. People are suffering in so many unfathomable ways. I sometimes feel like it might be okay to say that I am suffering, maybe a small bit, but then that makes me feel like I am being self-centred and deluded. I live with friends, have been able to work from home, fully supported from work, all my family and friends are happy and healthy. To be able to say that at any time is extremely fortunate, let alone during a pandemic. And that makes me feel guilt. 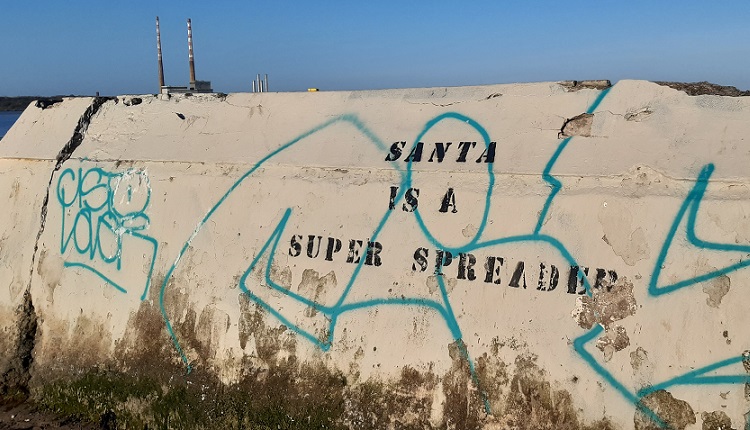 But there is hope. Thank God. Or, rather, Science. Multiple vaccines being approved seem like a miracle. Still some people are vehemently against that. Do anti-vaxxers realise that they themselves are all vaccinated? The degree of competence that conspiracy theorists have in our government, that they could have played a role in some global hood-winking is impressive. If you could bottle that optimism, you’d make a fortune. But it would probably be, ultimately, for the Illuminati. Swings and 5G towers, as they say.

There prevails a notion amongst some that the government is trying to reorder society for the rich and powerful. I would love to know what beautiful, egalitarian society these people were living in prior to this. The machinery of capitalism was long since oiled with the blood of the workers. Look at how the current government treats the most vulnerable. Eamon Ryan had to be woken up to register his vote against paying lower-paid workers a living wage, in the middle of a pandemic, lest we forget. Probably, he was dreaming of kicking homeless people in the head as he zipped along the new bicycle lanes.

Most people dislike lockdowns. I certainly do. We are all being starved of the very essence of humanity. However, we need to discern between not liking something and not believing in it, at all. A lot of people want to seem like the smartest person in the room, by taking an alternate view to the mainstream. In days gone by, these were the type of people that would sidle up to you in the pub and tell you their dick was sore from too much shagging the night before and did you want to hear about why they were kicked out of the army. That usually also involved their Private Johnson, sadly.

Now with Social Media, everyone has their plinth. Just because you can say something, doesn’t mean that you should. I’ve seen a multitude of pictures on Social Media, quotes misattributed to the likes of Archimedes and Nietzsche. They haven’t bothered to verify that the quote is accurate. They just want to feel smart and empowered. And if that doesn’t just encapsulate it all, I don’t know what does. If you are looking for a philosophical quote to superimpose on a tropical background, perhaps have a look at section 21d of Plato’s Apology.

I complain about people wanting to feel smarter than they are yet, as just demonstrated, I am guilty of it myself. I wonder why?

Throughout all of this, it seems inevitable that we will all seek the angle that we can divert our emotions towards which is, ultimately, away from ourselves. It is the meat factories; the fruit pickers; the airplane arrivals. Not me. When we confront ourselves and our emotions, we realise that life has been drab, dreary, boring, at best. That we are scared. It is a lot to process. It can be really difficult to admit that. And that is okay. When I was able to admit those things to myself, I felt a bit better. It will be hard. And harder for some than others, which isn’t fair. But we can and will get through this.

As said by a great person, ‘I learned that courage was not the absence of fear, but the triumph over it’.

Niall Lanigan is a 35 year old man-child originally from Waterford and living in Dublin. When not attending to his day-job he enjoys sports, reading and pretending to keep abreast of modern politics.