Lately, I’ve come across a lot of posts on social media stressing that ‘Just because I’m not skinny, doesn’t mean I’m not anorexic.’ With alarming frequency, it appears that out of all the eating disorders currently identified in the medical field, Anorexia has become the one that is most ‘desired.’ Is this because it’s the most romanticised of all the eating disorders? Is it because it’s the most well known? One only has to type ‘skinny’ into Tumblr to see post after post of (supposedly) beautiful, black-and-white posed photos of emaciated girls with captions like ‘Pretty girls don’t eat’ and ‘Skip dinner, wake up thinner.’

Occasionally, one might even come across a poster of a girl or a guy who is not underweight, displaying the caption ‘But they don’t look anorexic!’ Pictures such as these only show just how many misconceptions there are about what Anorexia actually is, and what Bulimia actually means. As well as this, there is also the problematic online representation of Binge Eating Disorder, which is still repeatedly overlooked as either greed or laziness, instead of the medically recognised disorder it truly is.

Anorexia is, by definition, “a refusal to maintain a healthy bodyweight.” Its secondary characteristics include “an intense fear of gaining weight” followed by “a distorted body image.” In order for a person to be medically deemed a sufferer of Anorexia, they must meet the first criteria, plus the second and/or third criteria. Anorexia can be defined through either restrictive eating such as dieting, fasting, and calorie counting, or purging by using laxatives, vomiting, and exercising intensely to achieve weight loss.

Bulimia, on the other hand, is a disorder characterised by binge-eating episodes followed by purging behaviour. As with Anorexia, the purging associated with Bulimia may involve vomiting or the use of laxatives to rid the body of food. Binge eating does not mean eating an extra slice of pizza, or over-indulging with two desserts at Christmas time. It is eating excessive quantities of food in a short space of time. Hilariously – and I do mean ‘hilariously’ in the sense that this is absolutely not at all funny and actually quite offensive – when I attempted to search Google images for an infographic that might demonstrate just exactly what binge eating is, I found the following photograph. 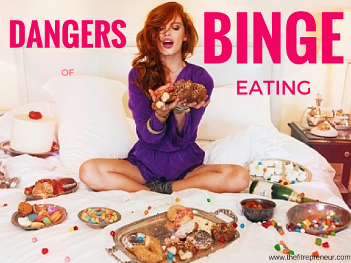 Beautiful girl, sitting on a bed, surrounded by food. She’s perfect. She’s thin. She’s positively euphoric to be encircled by cakes and donuts and champagne. She is a completely romanticised, unrealistic representation of what binge eating means for a real life person. So, I’m going to try to explain exactly what it does mean.

Imagine your face is itchy. Imagine it’s only getting itchier and itchier. Imagine that every time you look at yourself in the mirror, or think about your body, or something stressful happens in your life, that itch flares up. The first thing you do is reach up to scratch it, right? You feel compelled to do it. It is unbearable not to scratch it. It almost burns when you don’t.[pullquote]One might even come across a poster of a girl or a guy who is not underweight, displaying the caption ‘But they don’t look anorexic!’ Pictures such as these only show just how many misconceptions there are about what Anorexia actually is.[/pullquote]

So now imagine that, just like the itch, every time you’re stressed or whenever something goes wrong, you want to eat. Just like the itch, you try to stop yourself, but the desire to eat only gets stronger and stronger. Until you give in. And as soon as you’re done, you regret it. You want to purge your body of what you have just subjected yourself to, so you make yourself sick. You take laxatives. This happens every few days – or in more extreme cases, several times a day.

For a person suffering from Bulimia, they cannot stop themselves from engaging in this binge, purge, binge, purge cycle. The woman in the photo above may well suffer from Bulimia – who am I to judge? A person suffering from Bulimia may be underweight, overweight, or anything in between, but this portrayal of binge eating is sickening. It’s romanticised. Binge eating is a person smearing food all over their face as they try their hardest to stop themselves reaching for just one more biscuit. It’s knowing that as they’re eating it’s going to end in purging. It’s knowing how disgusted they are going to feel afterwards.

This brings me to Binge Eating Disorder. As the name suggests, it is a disorder characterised by periods of binge eating. According to BodyWhys, a person suffering from BED will try to maintain an appearance of ‘normal’ eating habits, and will often be seen engaging in diets in public. In many ways, it is similar to Bulimia, but the key difference is the lack of purging. A person suffering from BED will still experience guilt and shame over what they have done, but they will not purge their body in an attempt to rectify those feelings. BED, like many other eating disorders, is incredibly isolating as the behaviours associated with it are almost always conducted in secret.[pullquote]She’s perfect. She’s thin. She’s positively euphoric to be encircled by cakes and donuts and champagne. She is a completely romanticised, unrealistic representation of what binge eating means for a real life person.[/pullquote]

And finally, we come to Eating Disorders Not Otherwise Specified, or EDNOS. Essentially, EDNOS is the category of undefined eating disorders where an individual may display many characteristics from the range of symptoms of other disorders, but do not comfortably fit into any one particular diagnosis. In this case, a person with EDNOS may later develop Bulimia, Anorexia or BED, or they may not.

Similarly, EDNOS may be a diagnosis given to a recovering anorexic who perhaps no longer refuses to maintain a healthy body weight, but who does his or her utmost to not gain any more weight by dieting, restricting, or engaging in other behaviours that may be seen within Anorexia. Confusingly – stay with me here – EDNOS sufferers may also be diagnosed with a form of Bulimia, Anorexia, or BED. Take for example Atypical Anorexia – where a person develops all the criteria for Anorexia with the exception of significant weight loss, leaving them within the ‘normal’ weight range.

What I’ve learned from all of this research is that all of this information is out there, but is grossly overshadowed by mainstream and social media’s inaccurate portrayal of eating disorders. Mantras like ‘Pretty girls don’t eat,’ Kate Moss’s infamous “Nothing tastes as good as skinny feels” quote, and other sensationalised sayings people frequently overuse to ‘explain’ eating disorders completely deter anyone from wanting to actually find out the truth. Sites like Tumblr are not all-knowing lexicons. There exists a plethora of misinformation – infographics and all – that do not explain what an eating disorder actually is.

Although the poster at the start of this article is correct in saying that Anorexia is not necessarily defined by weight loss – as Atypical Anorexia is still a disorder – there are still a lot of things wrong with its explanation. Anorexia is defined by weight loss. It is a mental illness that results in certain behaviours, and as with all eating disorders, or any disorders, the purpose of a ‘disorder label’ is to aid a therapist or doctor in deciding what sort of treatment a person needs.

What that poster should say is that ‘Eating disorders are not a body type.’ They affect both men and women. There is no specific age in which a person is more likely to develop an eating disorder. They do not discriminate.

Finally, the poster states that if you are underweight “it is often too late to cure (the illness).” It is never, ever too late. There is always time to get help, for as long as a person is still alive there is hope. There are so many good organisations out there, such as bodywhys.ie, that are full of accurate and easily accessible information, plus a plethora of advice if you fear that you, or somebody close to you, might have an eating disorder. It is never too early to get help, but it is most certainly never too late.

Courtney Smyth is an aspiring author with half a psychology degree and a wholehearted dislike for badly made tea. She can often be found hiding in her room writing and pretending under-researched opinions don't exist. You can find her other writings here: https://aseriesoferraticism.wordpress.com/

The Universal Mind of Bill Evans

What even is a ‘Special Snowflake’?

‘Watch Your Language!’ : A Guide to Using Mental Illness Terminology…