I made contact with Rabbit Hole because I liked what they were doing and I wanted HeadStuff to be a part of it. I suggested that we’d scratch their back if they’d scratch ours. Yes, was the answer, “we like to barter with people. Provide our services in return for theirs.” 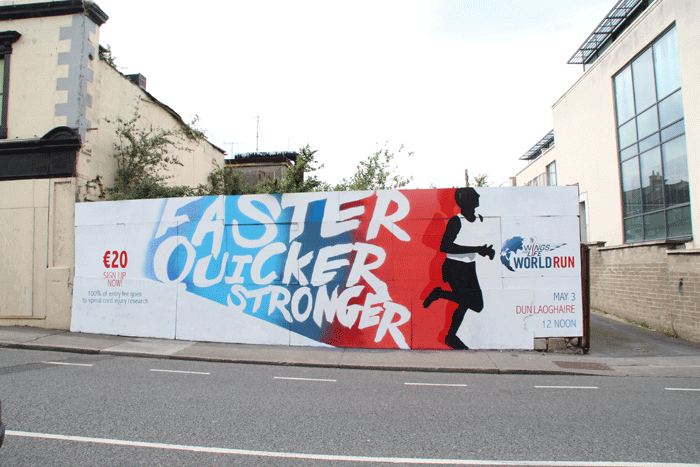 I expected to meet a shrewd, considered fortyish year old man who had made mistakes and happened upon a golden idea. Instead I met a twenty-four year old, shrewd, considered, cool guy with Conor McGregor hair.

He’s wearing a pair of shorts and it’s only a relatively nice day. I told him that I thought he’d be older: “I always sound like I’m 40 years old”. He himself isn’t Rabbit Hole, he is just one of the ‘movement’. A legion of these young, cool (not an affectation, genuine coolness) artists who are doing something different, worthwhile and creative. Unlike others who aredoing what they want to do, Rabbit Hole are making money.

Not that that’s the goal or anything: “We don’t give a fuck about money, it’s irrelevant to us… now that’s not to say… of course we need it to expand, and to grow and to shape the company in the way in which we want to shape it, but it’s not our priority. Our priority is developing and expanding the brand that we are proud of and happy to be a part of.

“That’s what our whole Join the Movement thing is about, it’s a lifestyle for us. There’s no difference between us going to work, to just meeting out normally (he gestures to his shorts, I tell him he looks great). So it’s really about the people involved in the brand and how we carry the brand.”

He tells me that they like to keep as far away from marketing jargon as possible. They don’t even call themselves a creative agency; they’re a Creative Guerrilla Movement.

I start to worry that this is all beginning to sound a bit fanciful, a bit hippy-dippy-let’s-all-live-in-a-commune-with-no-money-and-call-ourselves-a-“movement”. But they’re all too aware of that cliché and they’re not too interested in it. Money is just not their motivator, and I understand that, because it’s the same for me. Though sometimes I wish I was motivated by money, it would probably make shopping easier.  “We’re just being honest and truthful,” he says. “This is who we are and this is what we do. What you see is what you get.”

“You see a lot of agencies, and clients, and they have this idealistic opinion of themselves that’s not achievable. They try to portray themselves in this way, but it’s not real. Like, what are you doing? You are who you are.” I agree with him, he has a lovely pair of legs.

Rabbit Hole are motivated by art. They want to spread their work across the city. They want to help other people reach their goals. They want “to blend the artistic and commercial together” to make advertising more effective, more noticeable. They’re trying, in fact, to make it more art than advertising. More artistic less commercial “90% artistic, 10% commercial”. I asked if they’d like to be able to just make artwork and have it sponsored by the companies that want to advertise.

Then he told me about his vision of Dublin as the outdoor art gallery. “We’re going to have plaques, like you’d see in an art gallery, on each of our spaces, and they’ll give you a synopsis of the concept behind the creative, how it was developed and why it was developed, and the finished product.” Here I was also told about some cool futuristic ideas that I’m not allowed to tell you about because they are futurey and someone will get hurt. But it’s going to be really cool.

At the moment they have 26 spaces in Dublin, and one in Galway. They plan to implement what they do here into Europe, the UK and the US.

There’s a great positivity in Rabbit Hole. They are not confined by any traditions or restrictions. They don’t have a ‘way’. They like the challenge of creativity, the trying new things, figuring it out, making things work. And this, they say, is what makes them different, this is what will make people look at their work and have it register where normal advertising won’t. “We’re exposed to a massive amount of advertising, it’s rammed down your throat, and most of it is pretty shit… it doesn’t even register and if anything, all most advertising does is put you off the brand.”

People always say to them, “how does this or that work?” and they say, “We don’t know. We don’t know how it works. We’ll sit down, we’ll talk about it, and then we’ll figure it out.” And clients ask them, “what can you do for us?”

“Has anyone ever asked for something that was too ambitious an idea that you’ve had to say it was impossible?” I ask.

“No. Never. People don’t have ambitious enough ideas. Small businesses are trying to mimic how bigger businesses operate, obviously they’re saying, ‘well they’re successful, we’ll do what they do’, but these days that’s a completely redundant way of thinking, you have to differentiate yourself from those big businesses in order to grow to the same size as them.”

I asked if their work ever gets grafittied over. “Never”, he said. All of the Rabbit Hole artists are involved in the graffiti community and they know who they are. And it never happens.

“Is Rabbit Hole taking young vandals off the street and giving them a purpose and putting their talents to good productive use?” I had to ask, even if I had a smile on my face while the question fell out.

Graffiti artists are just expressing themselves, he says. “If they were provided with an outlet for their creativity – which a lot of them aren’t, especially with graffiti, so they have to do it illegally – then there would be a massive reduction in the amount of illegal stuff that goes on. Because even now, all of the stuff that goes on in Ireland is all funded or created or developed by graffiti artists for graffiti artists. And artists by nature don’t tend to have a lot of money. It’s a difficult thing to do. There’s the All City Graffiti Jam which is run by All City who are a record label and supply shop in Temple Bar. The stuff they do is great, but that all comes out of the owner’s pockets. He shoulders that entire burden, he does that solely, and he’s not an artist himself, to give artists an outlet to do their stuff from a legal standpoint. But it’s a massive cost and he doesn’t get any funding for it.”

What about the people who own the walls you use, I asked.

“It’s a no brainer for the proprietor. We take space that, for them, is pretty much vacant and unused, and they’re not doing anything with it. We renovate it using our artwork, we generate a rental revenue for them and we maintain the space. And as well if they have a building, maybe for sale, and there’s artwork on it, it could help the sale via increasing interest in the building.” 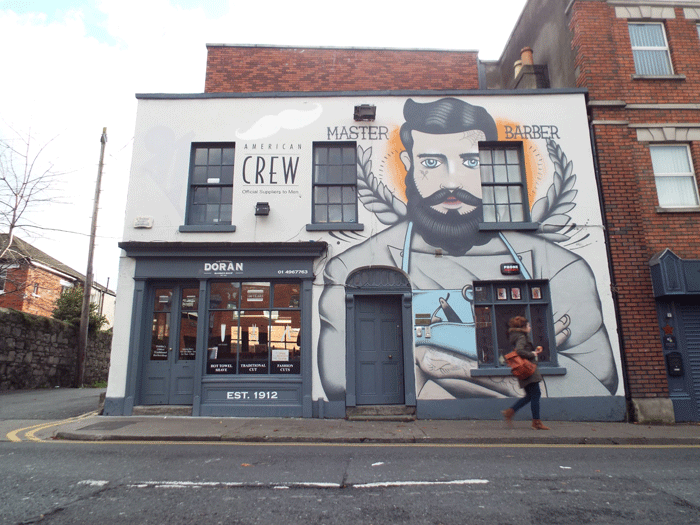 Since I became aware of Rabbit Hole, I started noticing walls with nothing on them, or spaces that I think would suit their company. That must be ten times worse for them when it’s always on their mind and they’ve a much keener eye.

“Everyday when I’m walking around I look at the city and see it as a blank canvas, and I think what can we do here?”

“But all of us have great appreciation for architecture, design and minimalism so it’s not like we want to have our stuff plastered all over the place. And that also separates us from a billboard company, obviously if you gave them permission, they’d put billboards everywhere, whereas, if we were given free reign, we’re not going to put our stuff everywhere because that would detract from it. And that kind of comes back to the outdoor art gallery idea because we want people to actively seek out the latest Rabbit Hole campaign and that’s interlinked with why we don’t want to have social media. That makes it too easily accessible to people online and they’re not going to give it the appreciation it deserves because if you really want to appreciate our work you need to go and look at it in person.

“When we have revised our website, we’re going to remove all of our social media. The reason being, we have Instagram, and I’d sit in the morning and I’d look through 200 pictures and of those 200 pics, all of them could be unbelievable forms of art and I’ll look at them for maximum one second, and then I’ll flick to the next one and the next one, I don’t appreciate them for what they are.

“What we want to do is make sure that anyone who is viewing our work will actively engage with it. So if they want to see what we’re doing, they have to visit our website. If you have to visit the website you’re going to take more than one or two seconds to look at it and you’re going to have a little browse around. We want to develop our platform further so it is genuinely interactive and engaging as opposed to just another cog in the machine.”

It’s true. The reason I got in touch with Rabbit Hole was because I became aware of them. I saw their mural and I stopped and actively engaged with it. Then I saw their logo and typed their name into Google, I went to their website and rang the phone number. If it was a normal billboard ad I would have done one of three things: 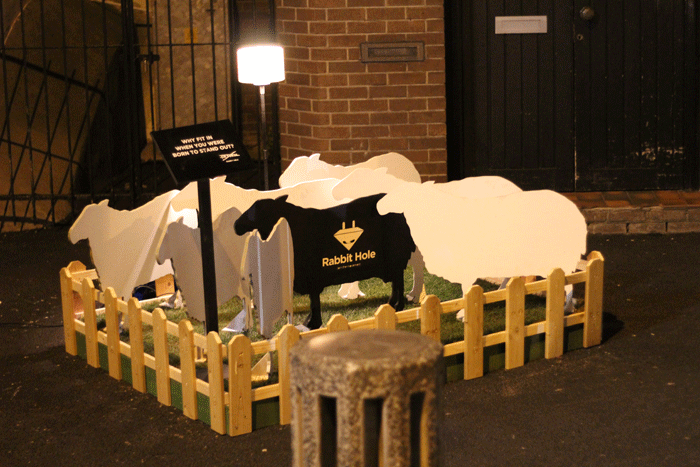 So, their idea works, it looks better, and it’s just nicer. It’s art lads, it’s art on the bare walls of our lovely city. It’s art that is making money, like all (good) art probably should.

At the end of the interview he exploded a smoke bomb and disappeared. I was disappointed because I wanted to see his calves.

If you have a business or something that you want to get out there, or just a cool idea, I recommend you get in touch with the lads – www.rabbitholepromotions.com.

Also, you might be able to find a HeadStuff mural on one of the Rabbit Hole walls, if you can find it you should, actively engage with it by taking a picture beside it and tweet it to us @ThisHeadStuff and @RabbitHolePromo (which exists for the time being).

Raw Talent |1| The Best Face You’ve Ever Seen, But More