Making a Thing: Not a Funny Word

My head is so full, it’s as if the thoughts and words themselves are pressing on the inside of my skull. My bones and muscles ache. I can’t sit still. Even though I’m physically and mentally spent, I’m not sleeping very well. And I’ve never been happier. I’m making something new.

Making new work is one of the most fun and terrifying things. You can’t separate one from the other: without terror, there can be only muted fun. Like a rollercoaster. You may be screaming, a little pee may even come out, but the rush makes you feel alive. When it ends, you want to go again.

The anxiety around new work comes in different forms, depending on your job, but we all go through it; a similar feeling to handing in your homework for correction, or presenting an only-slightly burnt cake for tasting at the end of Home Economics double period. Like, it may not be a perfect cake, but it’s your cake. You can’t help but hope the teacher doesn’t go hard on it. Come on! Only an hour ago, there were only ingredients, and no cake. And now there’s a cake! The bits that are burnt? They’re your bits! That’s what makes it your cake. No better than anyone else’s, possibly objectively worse, but you made that goddamn cake and fair balls. Some people just sit around bitching about cake.

You want it to be good, though. Of course you do. Someone has to eat the cake and you don’t wish any one of those prospective tasters any harm. On the contrary, what you picture when you’re cracking the eggs into the basin, sieving the flour and praying by an oven door is sheer, cake-enduced joy. You want every bite to bring pleasure – or at the very least to fill a gap: even if your cake is not enjoyed, it should at least fuel someone to their next meal.

But that’s not always possible. Not everyone will like your cake.

And here’s where some of this week’s rush of fear is coming from: I’m putting on new work about something that happened to me. Having worked in comedy for so many years, I’m used to jokes bombing. I’m used to shows getting an audience of three, or that one audience during the run that seems to have agreed beforehand to sit in angry silence, staring at the holes where the jokes were yesterday. But as an actor, if things go wrong on stage, you cover it up, you carry on. Because even if the piece is about you, once the thing is up, it’s not about you. You do your best, make sure what you’re saying is clear, but after that, it’s about giving people a good night. You can’t take it personally. You have to give your all and, hopefully, their money’s worth.

I’m doing a work in progress, as part of the Abbey Theatre’s What’s Happening Now series. Lads, I can’t believe it. I’ve got a brilliant director in Philly McMahon; he’s helped me to tease the words from personal testimony to show. It’s funny, even though it’s about my having to travel to the Netherlands for an abortion. How can something that’s not even funny to me be funny? Well, that’s what I wanted to see. The public conversation has been dominated by conservative thinkers, with those of us directly affected always having to apologise, or be told that our experience – our real lives – might be unsavoury to some. Well, I’m taking my own back. I hope it demystifies some moments, but mostly, I hope it shows people that each story is unique. There are many facets. Some of them are absurd.

Humour is my own coping mechanism. It’s my work. It’s my armour. I didn’t lick that off the stones – that’s what we do here in Ireland. No matter how dark the subject, we’re able to laugh at ourselves. It helps us deal. It helps us heal. But most of all, it makes us real. To remove all humour from a story removes some of its humanity. I may fall flat on my face in my attempt, but telling my own story in my own words is something I have to try.

I’m used to ‘jumping off cliffs’ onstage – every week at Dublin Comedy Improv for years. This is different. This will possibly be controversial just because it exists.

But the reason it exists couldn’t be further from controversy. It’s time to have some 3D conversations about this topic. There might even be some healing laughs along the way. You might even find yourself joining in.

I want to thank Philly, and Graham McLaren and Neil Murray from the Abbey who decided that our National Theatre was the right place to have a robust and rounded conversation about this. You should check out the rest of their What’s Happening Now series: it’s really exciting.

So, here we go. Rollercoaster car teetering at the top. And…dive.

Not a Funny Word (Bookings) will be performed as a work in progress at the Peacock Theatre on May 11, 12 & 13. Written and performed by Tara Flynn. Directed by Philip McMahon. Composer: Alma Kelliher. Pianist: Jane Deasy. Choreographer: Philip Connaughton. 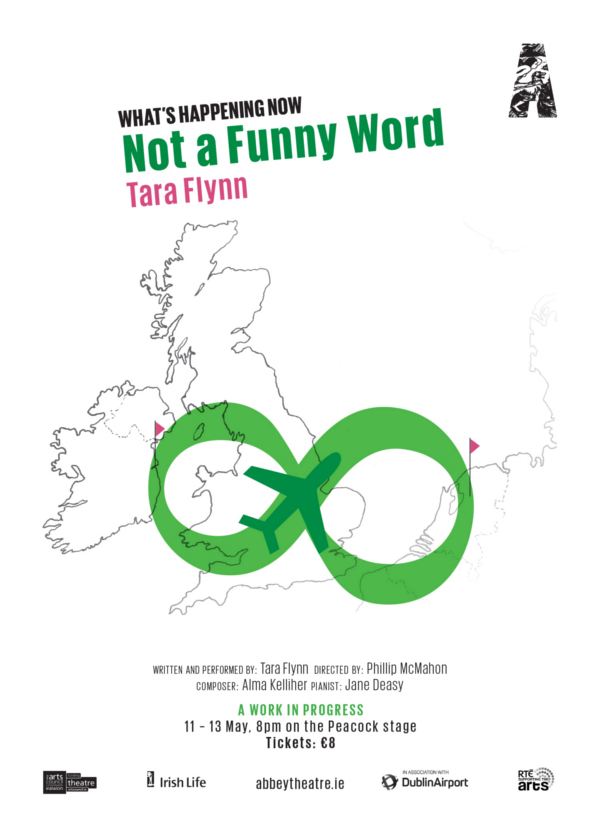 Tara Flynn is a writer and performer. She lives in Dublin with her husband, a dog and a cat and she appears regularly with Dublin Comedy Improv. You're Grand: the Irishwoman's Secret Guide to Life (Hachette Books Ireland) was an Irish bestseller. Giving Out Yards: the Art of Complaint, Irish Style is in bookshops from October 15.