When you think about psychology, you probably don’t think about gut microbiota or taking saliva samples. But that’s exactly what Andrew Allen, senior postdoctoral researcher with the Department of Psychiatry at University College Cork, considers as part of his research.

Andrew is part of the CARING team – Creating Awareness of Research in Caregiving – which is made up of members from UCC’s Departments of Psychiatry and Neurobehavioural Science, Department of Epidemiology & Public Health and the APC Microbiome Institute. 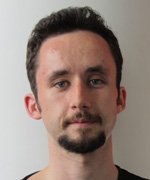 “That’s something I’ve become increasingly interested in, in the last number of years. Just a lot of interest in whether stress processes which link human psychology to human biology can also have an impact on the gut microbiome,” Andrew said, as we chatted over Skype recently.

One common biomarker of stress is to measure salivary cortisol. Andrew uses this indicator, among other things, to measure the levels of stress felt by caregivers. His research is looking at how chronic stress affects the growing number of people who care for ageing relatives, especially for those suffering from dementia.

Andrew has a wide range of interests, and in a few short years his research has covered a variety of fascinating topics, from the psychology of creative thinking, to the effects of caffeine and now to coping strategies for carers of dementia patients. But it all started as a teenager with a fascination with psychology.

“I decided I wanted to be a psychologist when I was about 14. I was reading a lot of books, probably in a more psychotherapy, social psychology kind of setting, that kind of topic, which I became very interested in. And I felt that this was something I wanted to pursue as a career.”

This seems like a strange thing for a young boy to be interested in. I asked Andrew why it was he thought psychology is such a popular discipline.

“I think the main reason psychology is so popular is because it’s just an interesting topic. I think, as a species, we’re almost designed to be interested in ourselves and each other.”

Andrew took his first degree in Dublin, earning his BA (Mod) in Psychology & Economics, then moved on to Cardiff for his PhD before settling in Cork in his current role. The title of his PhD thesis is “Chewing gum’s effects on alertness, performance and stress”. And while it seems a strange leap from chewing gum to dementia, his focus has remained around stress, biomarkers for stress and psychobiology. Across the various institutions where he has worked, his research has shifted and changed, reflecting his own changing interests and those of his mentors and colleagues.

Andrew’s current research looks at the biological burden of dementia caregiving. More and more people are finding themselves in the position of carer for ill and elderly relatives, a situation which can be physically demanding and psychologically stressful.

He also writes a blog, a place where he can work through his own thoughts and clarify them, as well as communicating to a wider, non-academic audience.

“When you try to write for a more general audience, it can help you to clarify your ideas. Academic writing within science is geared towards clarity, but it does come with its own lingo. The best way to test your own understanding of stuff is to try to write in an accessible manner.”

When I ask Andrew if he thinks public engagement is important, he replies, “Absolutely!”

“I do think if you’re receiving public funds to engage in research it’s important to make people aware, the tax payer gets something back from it, in terms of being able to be aware of what their money is being spent on.”

As part of this public engagement, UCC held a scientific seminar series on stress and caregivers and is planning more general public interest events to follow later in the year.

After my chat with Andrew, it’s clear that psychology research is not all sitting in front of a computer, doing statistics and trawling through large data sets. It can be quite hands on, as well, with taking samples, meeting with research subjects, communicating with the public and getting involved with outreach programs. I finish with my usual question – what advice would Andrew give to anyone thinking about getting involved in psychology research.

“Psychology is a discipline that takes a lot from other disciplines. From statistics, at a mathematical end, to biological and neuroscience stuff, to more social psychology and moving towards the humanities. So it’s a discipline that’s well geared to someone who is an all-rounder.”

What is Loneliness? | Shot of Psychologist Joanna McHugh-Power