Bathtubs of blood… willingly given

I like to ask phlebotomists for an approximation of how much blood they’ve drawn over the course of their careers. Then I always add “in units of bathtubs, if you please.”

No one has ever given me a good answer. Not one phlebotomist in the multiple times I’ve volunteered to let someone drain away a portion of my blood has been able to answer this very simple question. Apparently most phlebotomists don’t think in terms of lifetime quantity, or maybe it’s just that they don’t think in terms of bathtubs. After all, a bathtub is ambitious. A bathtub is extreme. A bathtub of blood would be a considerable achievement, since it would take more than four “average” people to fill a bathtub of blood at one go (since the average person has about 10 total pints of blood…but that calculation is verging well past creepy. Let’s move on.).

Anyway, I want to know. I’ve asked and asked and now curiosity has gotten the better of me. So with a little maths, here’s the best I can figure:

There are 8 pints to a gallon

A phlebotomist takes 30-40 donations per week according to a contact person for the Irish Transfusion Service (So we’ll call that 35 donations for the purposes of this exercise.

There are approximately 48 “working weeks” to the year, including holidays etc. So that works out to (drumroll please…) 5 bathtubs per year. 5 bathtubs of blood. Per year. Over the course of a career, that’s…a lot of bathtubs.

I’m pretty pleased to think of my O+ swimming around in that mix.

When I was a teenager, I used to go with my dad to blood donation day at his office. This must have happened at least three times, because I remember not just the pattern of baring my arm and letting the blood flow but also the competitive spirit. My father and I have a bantery relationship that shifts into competitive mode at the slightest opportunity. Playing card games is one such situation. Blood donation was another.

So there we would be, reclining in side-by-side chairs. His veins popped out of his arm in a decidedly creepy fashion. Mine had to be hunted down by the nurse. Then we would race. We would squeeze the little squeezy ball and watch the floppy bag of dark red blood fill. I wanted so badly to outrace my father at blood donation. Sadly, he won every time.

Blood donation is part of what I consider a basic in the pattern of human life. It’s so elemental: I give of my body for the well-being of a stranger. I hope to never need such a gift in return, but I would hope that a stranger would have banked the same fundamental offering for me. I remember first being told that one donation could help to save the lives of three people. Imagine that, as a teenager: being told that you could slip into a seat, open your veins, and have three people’s lives saved. I gratefully took the juice and cookies afterward as a reward, and walked proudly with the bandage on my arm—I donated.

When I arrived in Ireland, I eventually made my way to the blood clinic. I was unpleasantly surprised to find that I had to give a sample of my blood and then wait three months before donating (I apparently have suspicious immigrant blood). The rules on blood donation are frequently problematic to one degree or another, (example: the gay blood donor controversy currently raging in several countries) but I’ve got to say I felt a bit miffed by this accusation of blood impurity on the basis of nationality. 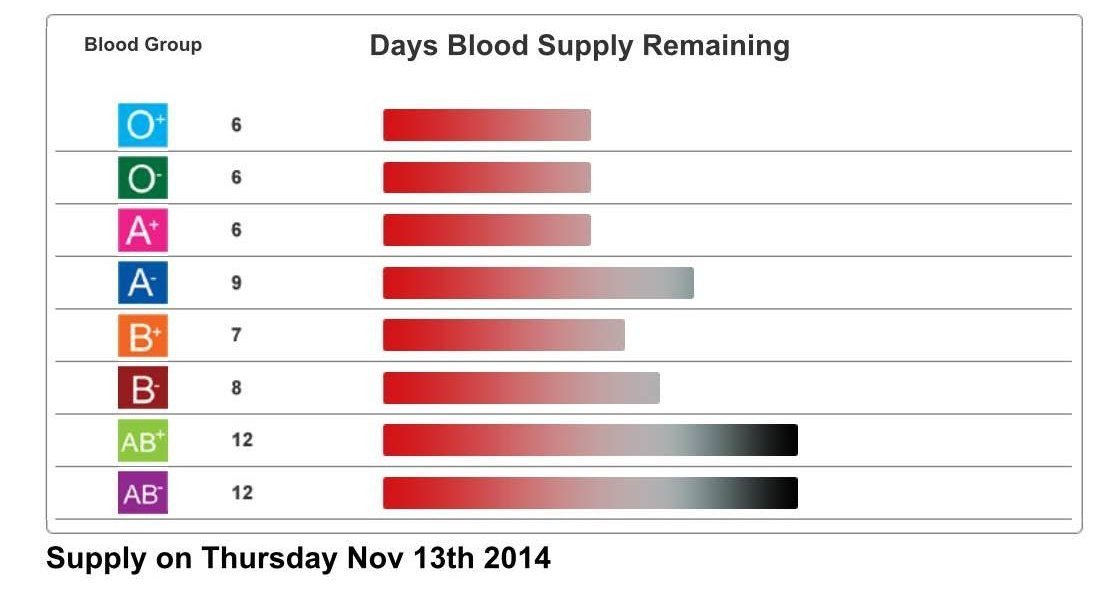 If you’re interested in stats and added guilt, the blood donation website has a chart monitoring the blood supply available by blood type.  I’ve been keeping my eye on it for a couple of days, and I find it quite fascinating…

According to the nurse I spoke with that day (she wasn’t able to answer my bathtubs question—I did ask!) it’s immigrants like me keeping Ireland supplied with blood. The spokesperson for the Irish Transfusion Services said that this number is actually much smaller—around 2% of donations, although this discrepancy might be Dublin vs. the rest of Ireland. I also was surprised to find out that plasma is imported from the US to meet demand (I haven’t gotten around to researching how they’re shipped or what that looks like—I LOVE to think about container ships or jet planes full of Yankee plasma zooming across the Atlantic!)

It’s an interesting thing to imagine that for all the improvements in modern medicine, we still have to literally take blood from another living person in order to save a life. I still get the sense of astonishment felt by my teenaged self before that first donation—I can do this thing for someone I’ll never meet. Open my veins and let life flow into a stranger.

I know that some people have a deep fear of needles. Others have a low tolerance for other reasons. But here’s the thing in my opinion: in the face of all the problems in the world, doesn’t this seem like a worthy action? To offer a pint or two to the world’s available bathtub balance.

My favourite “fun fact” in researching this article comes from the American Red Cross website: “If you began donating blood at age 17 and donated every 56 days until you reached 76, you would have donated 48 gallons of blood, potentially helping save more than 1,000 lives!”

(For those of you keeping track at home, that’s just over one “standard” bathtub unit.)

Katie Dwyer is from the United States, but currently calls Dublin home. A generally overenthusiastic nerd, she gets excited about everything from music to poetry to human rights activism and travelling by train. Any day spent near ocean or mountains is a good day to her.