On September 30th the World Wildlife Foundation (WWF) released a landmark report on the health of our planet, which presents many harsh realities about the impact the ballooning pressures our species has been putting on the Earth’s resources and co-inhabitants. Let’s talk about three main issues facing our living planet, how they are connected, and how were going to solve them.

The headline results, which have been finding their way into media across the world, show a decline of 52% between 1970 and 2010 in the ‘Living Planet Index’ (LPI), a metric adopted by the WWF for approximation of biodiversity, taking a weighted average across the most reputable and reliable datasets, including those of the IUCN, Wildfinder and OBIS. This is leaving many more species than in recent history at risk of extinction, threatening environmental destabilisation and ecosystem collapse.

The details of principal causes of population declines, many of which are the usual suspects within conservation issues, are also presented, with exploitation of resources and land use change accounting for over half of the threats seen.

Exploitation here is in reference to hunting and fishing of animals, and secondary causes thereof, such as bycatch. Habitat degradation has long been known to have serious effect on ecosystems and human health that can often go unchecked for a long time, with the idea originating at the start of an environmental movement which lead to the establishment of the Environmental Protection Agency in the US. Habitat change is often linked to the development of land for agriculture, silviculture, mining and fisheries, of which huge amounts are happening in key regions for tropical biodiversity such as around Indonesia’s coral triangle and the Congolese rainforest. Clearly the rate at which this natural resource and land use change must be addressed sooner rather than later, and is intimately linked with socio-economic issues within underdeveloped areas. However, many of these issues are well known, with sensible, achievable solutions available, which will be expanded upon later. 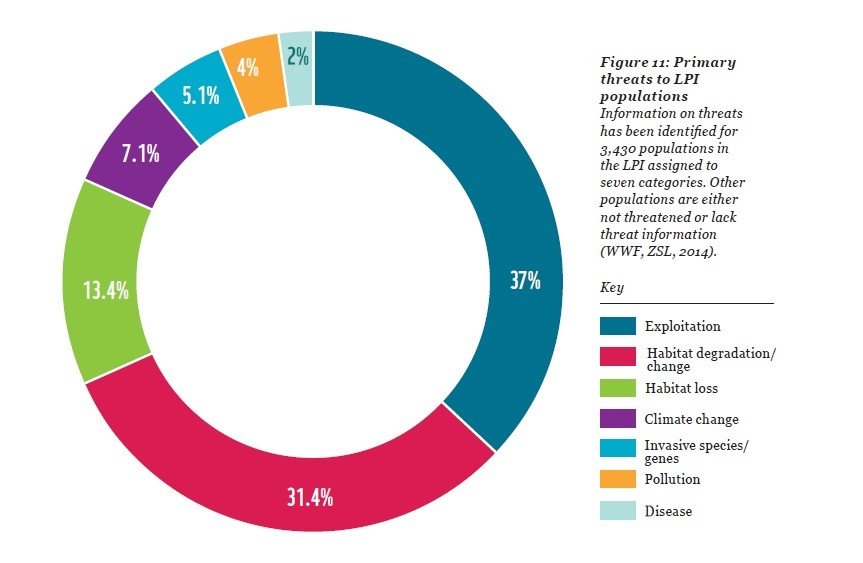 Perhaps of greater concern from a human perspective are the results presented for freshwater use. The study rightly notes a difficulty in communicating the process behind cleaning and using water, as for many, it ‘simply comes from a tap’. It further notes the disconnection between implied water use in the products we consume (‘water footprint’) which isn’t clearly-enough reported in many cases, though has been something  for which many people have advocated for years at the point of sale. Regardless, the results highlight known issues in water security, particularly around areas of the world with extremely high population densities, such as those living along the Yongding and Indus rivers which are frequently at risk of running dry. This constant threat of water scarcity, drought and flooding leaves many people across the world in danger of food insecurity, and with increases in extreme weather events predicted in the near future, we may see this become a bigger issue very soon, with further pressures being put on coastal countries. The increased salinization of freshwater and rising sea levels claiming land and aquifers are two salient issues which have no immediate solutions, and so preventative measures need to be taken on a global scale.

The habitat change seen to be so deeply affecting LPI populations also have the effect of modifying the hydrological cycle on a continental scale. Thus, the issue is one with strong links to not only demand for water from increased consumption, but also with redistribution due to a modified water cycle and the withdrawal of water from the hydrological cycle which is not returned to its source, so called ‘blue water’. 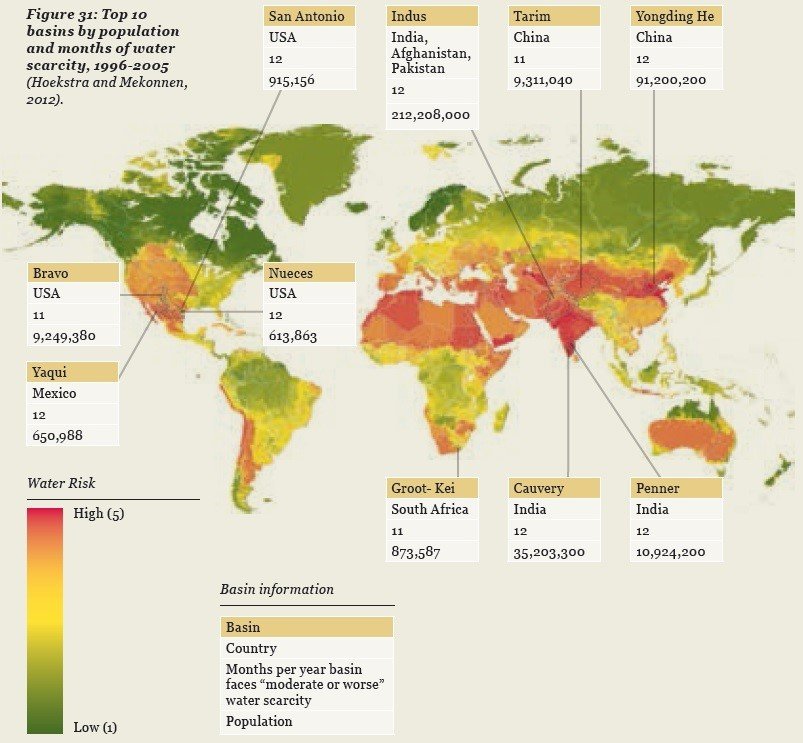 Ignoring the growing human population on our planet would be a gross error, and the study diligently and bluntly notes that the increase we have seen in the earth’s productivity, with our combined ecological footprint (the purple line), measured in a standardised ‘global hectare’ unit, increasing more or less linearly with human population (the black line). The goal is eventually to get the ecological footprint below that of the green line, a metric for the ability of the Earth to absorb human impacts.

Given the rising wealth and bulging middle class seen within the developing world, which are largely achievements to be celebrated, demands for natural resources and luxury items have increased in kind, leading to some interesting unforeseen affects such as a the widely cited growing demand for rhino horn spurring a huge increase in the amount being poached around the south of the African continent. It all boils down to the silver bullet of education, specifically of environmental issues, to dispel myths driving demand for resources such as these.

While human population growth continues to increase ecological impacts, the point, for me, is moot, as the solutions to this are well described and will come naturally with empowerment of women, education thereof and access and use of contraceptives. With the rate of global population growth topping out during the 1960s, and estimates showing population peaking at in around 11 billion by 2100, the focus must be on reducing per capita footprint, while further improving and forecasting crop yields.

With many reports in climate science the future looks bleak, and while there certainly is a lot to consider, the WWF include an extensive section on emerging solutions for increasing environmental stability and security. Many large scale ecological projects have already been proposed and are running, such as wildlife corridors which extend across much of East Africa.

This contribution does a lot to highlight the good work done in distinct locations across the globe, with positive European contributions coming in the form of pioneering research into wind energy continuing in Denmark, where in December 2013 when wind energy provided an equivalent of 57.4% of national consumption, and UK based power company Soco international terminating its operations within critical areas of DRC. Considering we have already seen the disastrous consequences of irresponsible exploration and exploitation by oil companies within the Niger Delta in particular, this comes as welcome news. 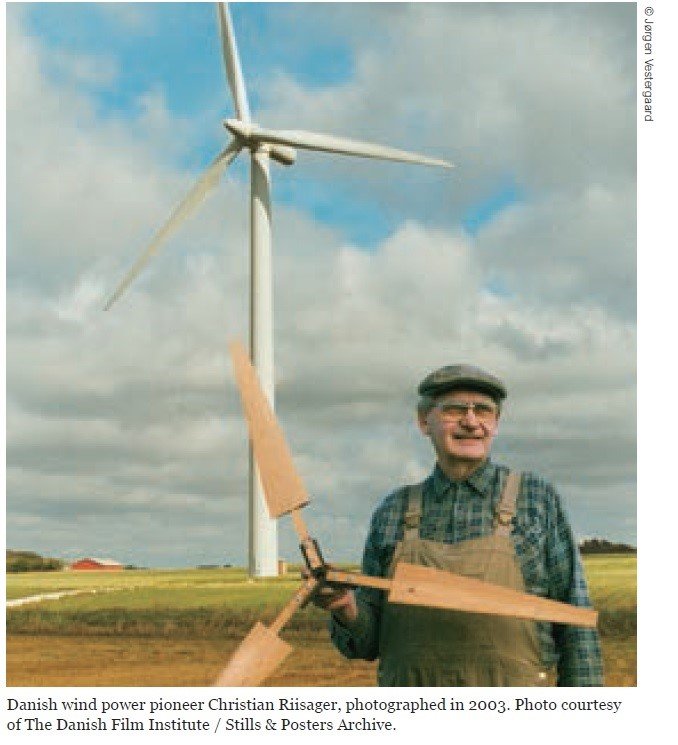 Perhaps most impressively, to me at least, initiative has been taken in South Africa where private enterprise has linked up with local communities and environmental campaigners to properly devise a protection strategy for the iSimangaliso wetland park, including a transfer of 9,000 hectares into the park reserves when they were designated as having significant conservation value. The enterprise still has plantations, though located on better suited dry mineral soils which will serve to reduce environmental degradation.

This practice of thinking deeply about managing land, including doing comprehensive land surveys and generating estimates of carbon stocks acts as a value adding service which assures accountability, has been rolled out across Indonesia, where rapid expansion has ceased in favour of this strategy. This has further buoyed the fledging carbon credit market, with emerging companies regulating and promoting ethical investments, also known as ‘divestments’. This information revolution is creating enormous data resources that are refining climate projections, and offer further securities to the models which utilise them.

Lastly, the goal of a significant per capita reduction in ecological footprint is wonderfully framed in the section entitled ‘We love cities’, with some extremely optimistic facts. To take but a few, nearly 15% of the world’s food is produced by urban farming, about 50% of Copenhagen’s residents cycle to their place of work or study and Mexico city’s reforestation programme is planting 2 million trees annually to help secure its water supply. The core idea is that people’s consumption demands can be met more efficiently in urban areas, and smart cities will no doubt play a pivotal role in our search for a sustainable future.