Have you ever wondered why your dog’s ears prick up even when you hear nothing? You sit reading the newspaper when Toby runs towards the door barking as if his best friend is outside. It could be minutes later before your neighbour and his dog go past.

Dogs have much more sensitive hearing than humans, hearing sounds four times farther away than we can. They can hear higher frequency sounds, can more easily differentiate sounds (e.g. they may recognise the sound of your car) and they can pin point the exact location of the sound.

Sound is caused by air vibrations. The more vibrations per second, the higher the sound and the higher the frequency. For example, a double bass makes low frequency booming sounds while a tin whistle makes high frequency piercing sounds. Humans cannot hear sounds that vibrate at greater than 20,000 vibrations per second (20,000Hz) (if you’re very young, the upper limit decreases as we age). Sounds above this frequency are called ultrasounds. Ultrasound echoes are used in medicine to build pictures of organs inside the body.

Dogs can hear sounds of up to 50,000 vibrations per second (50,000Hz). A dog whistle usually emits sound at greater than 20,000 Hz which explains why dogs respond to a dog whistle while it appears silent to us. 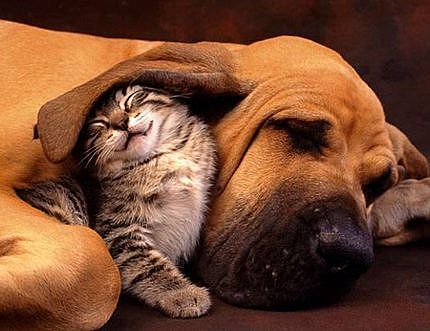 So why do dogs hear better than humans?

The ears of dogs are controlled by up to 18 muscles while humans are equipped with only six and can only move their ears slightly, if at all. Thus dogs can tilt and rotate their ears to funnel the sound into the inner ear more efficiently. In addition, the shape of some dog breeds ears are such that they amplify the sound. The canine ear canal is considerably longer than the human counterpart. Muscles allow it to finely tune the position of this inner ear canal so that it can localise a sound, hear it more accurately and from farther away.

But before you get carried away in awe of your canine friend, a cat’s hearing is even better. Cats are equipped with 30 ear muscles and are especially adapted to differentiate different sounds. So yes, they do know when you have opened the cupboard door which contains their food even if they’re in the sitting room at the time.

Do you have a science question that you’d like Dr. Siobhan Kehoe to answer? Feel free to ask below in the comments, on Facebook, Twitter or email [email protected].

Siobhán Kehoe has a PhD in Microbiology from the Royal College of Surgeons in Ireland. She has published over thirty articles in peer reviewed scientific journals and has acted as a reviewer for a number of journals, including The Lancet.
More recently, Siobhán has turned to fictional writing. She was selected for the Date with an Agent organised as part of the Dublin Writers Festival where she pitched her first novel The Thing About My Twin, written for 8-12 year old boys and girls. She has written features for HeadStuff and writing.ie and was long-listed in the RTE Guide/Penguin Short Story Competition. She currently writes a science blog for children, www.juniorscienceblog.com. Follow Siobhán on twitter @science_junior