On the conclusion of his treatise on Optics in 1704, Newton posed a number of questions in order to inspire a further search to be made by others. The First of these was the following: Do not Bodies act upon Light at a distance, and by their actions bend its Rays, and is not this action strongest at the least distance?

A young German patent clerk took this question as a challenge and by 1915 his physics “hobby” had made him very close to being a household name. Einstein’s proposal of deflected light was to be cemented in the minds of scientists and laymen alike after the publication of his Theory of Relativity and the subsequent expeditions of Arthur Eddington in 1919.

The findings of the expeditions (although somewhat controversial) confirmed Einstein’s prediction of results being twice that of Newton’s suggested angle of deflection. Eddington’s confirmation has been reaffirmed on many occasions over the years and to this day we are still using gravitational lensing to describe and explain great astronomical questions.

This is part one of a two-part series.

So, what is Gravitational Lensing?

In simple terms, if a large gravitational mass (the sun) is in the line of sight between an observer and a light emitting body (a star) the gravitational field of the sun bends the light ray as shown in the diagram above towards the observer. As we observe light in straight lines the apparent position of the star (as we see it) is not the actual position of said star.

Got it? So where did it all begin…

Newton calculated, with the math and physics at his disposal, the equation of the path taken by a light ray past a gravitational mass and he came up with an angle of deflection. Einstein had worked on the same problem in 1911 and came up with the same answer as Newton so as any right-minded person would do, he moved on.

In 1915, with his recently finished Theory of Relativity in hand, he decided to look back at the bending of light problem. He realised he had made a huge mistake. He had perhaps forgot to carry the one – or something far more relativistically complicated. His new calculation for the deflection of light was now twice that of Newton’s.

This was a big deal – people did not question Newton! Einstein wasn’t the science poster-boy he is today at that time, so he had a tough time getting his voice heard. Oh, and there was also a world war going on.

Meanwhile, the protagonist of the 1919 expeditions was an English astronomer by the name of Arthur Stanely Eddington. In 1912, at the age of only thirty, he became the Plumian Professor of Astronomy and Experimental Philosophy at the University of Cambridge, the most prestigious astronomy chair in Britain, and two years later became the director of the Cambridge observatories.

When Einstein presented his General Theory of Relativity to the Prussian Academy of Sciences in 1915, Eddington was in wartime England. Luckily for him he had a close friend in neutral Holland, Willem De Sitter (later to become one of the founders of modern cosmology), who had received copies of Einstein’s papers and passed them on to Eddington.

Eddington’s enthusiasm and promotion of the work in the Royal Astronomical Society in 1917 pushed him to be granted permission to test the theory of bending light “out in the field”.  The eclipse on May 29th, 1919 was chosen as at the time the sun would be right in front of a prominent group of stars known as the Hyades. Two expeditions would be sent. Eddington would lead one to the island of Principe off the coast of West Africa and the second would travel to Sobral in Northern Brazil under the watch of Andrew Crommlin (an astronomer at the Royal Greenwich observatory).

The war had its first part to play in this tale as, in 1917, Britain introduced conscription. Eddington, as a devout Quaker, let it be known he would refuse to serve if conscripted. Public opinion was heavily against conscientious objectors and Eddington could well have been sent to a detainment camp with other Quaker friends. The astronomer Royal at the time, Sir Frank Wilson Dyson, and other prominent Cambridge academics went to the Home Office to argue that it is not in the interest of the nation to send one of their most eminent scientists to fight in the War. Eddington’s draft was postponed but only on the condition that he must lead the expedition to Principe if the war had ended by 29th May, 1919. The war also made it difficult for Eddington to get his hands on the proper equipment. Specialised telescopes and photographic equipment were needed but the required instrument makers had been conscripted or engaged in war work. Virtually nothing could be done until the armistice was signed in November 1918, making the preparations hectic. Amazingly they managed to leave on schedule for the expeditions in February 1919, but their troubles were not yet over with.

Both expeditions had experienced technical problems. On the day of the eclipse Eddington was nearly washed-out and battled with heavy cloud and rain. Near totality the sun began to appear dimly through the cloud and some photographic images could be taken. Most of these were unsuccessful due to weather conditions but two were usable. In Sobral the weather was much better but again they ran into difficulties, this time from the heat. The telescope and photographic plates, which were set up overnight, expanded as the temperature rose in the morning sun, disrupting the focus set. As a result most of the main Sobral plates were badly blurred. Luckily they had brought a smaller, back-up telescope measuring 4-inches instead of the 10-inches previously used which was then out of focus. Thankfully the smaller telescope performed well and the plates obtained with it were to be the most convincing in their final results.

Back in Principe, Eddington was having more problems. Due to a dispute, the steamship operators were on the verge of striking and this forced Eddington and his team to leave earlier than expected. They were unable to make reference plates (which required staying on the island for several more weeks). This meant systematic errors could not be fully accounted for and left his results open for considerable criticism. In June 1919 that month’s issue of Observatory Magazine ran two telegrams they had received from the expeditions. Crommelin in Sobral wrote: “ECLIPSE SPLENDID”. The other, from Eddington, was a little more hesitant reading: “THROUGH CLOUD. HOPEFUL”.

On returning the teams analyzed their data as the scientific community waited for what could be the confirmation of Einstein’s predictions, or embarrassment to Einstein, Eddington and all those involved.

Dyson presented the main results at a special meeting of the Royal Astronomical Society and the Royal Society of London on 6th November, 1919. Crommelin’s results from Sobral, with measurements from seven stars in good visibility, gave the deflection as 1.98(+/-) 0.16 arc seconds. Eddington’s results from Principe were less convincing. Measurements were taken from only five stars and due to the bad weather conditions the error was much larger. Nevertheless, they still had a result of 1.61 (+/-) 0.40 arc seconds. Both results were within two standard errors of Einstein’s predicted value of 1.74 and both were also more than two standard errors away from either zero or the Newtonian value of 0.87 arc seconds.

Although the results from Sobral were consistent with Einstein’s predictions, Eddington had made sure to exclude the measurements from the main equipment in the analysis and just include the results from the 4-inch telescope. Although they had grounds not to use these results due to the problems with the focus caused by expansion, the plates he left out yielded a value of deflection of just 0.93 arc seconds, very close to that of Newton’s result. Due to the omission some suspected Eddington of cooking the books by leaving these measurements out.

Scandal aside the eminent Professor J.J. Thomson, discoverer of the electron and Chair of the meeting was convinced, stating: “This is the most important result obtained in connection with the theory of gravitation since Newton’s day.”

After this monumental expedition many more went on to cement Einstein’s theory. In 1922 another eclipse, viewed from Australia, produced scores of measured angles of deflection and had much more convincing statistical data. The standard error however was still of a similar size, around 0.20 arc seconds. Measuring the deflected light rays in this manner, using optical telescopes, continued into the 1950s but never increased much in accuracy. This is due to the difficulties in observing stars through our atmosphere. More recently similar measurements have been made not by using optical telescopes, but with radio waves. 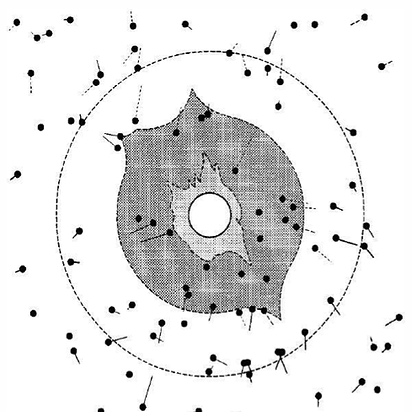 The uses of Gravitional Lensing and the effects it causes on distant objects are both mindblowing and beautiful. I will talk about these in part two. Distorted galaxies, Einstein Rings, Double Quasars, Dark Matter and Exoplanets all to feature on HeadStuff.org so be sure to check back soon.

Crystal Fairy and The Magical Cactus