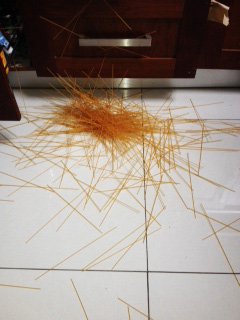 Gravity is something we all take for granted. When we drop something it falls to the ground. Just last week an entire packet of spaghetti dropped from its container onto the floor creating quite a lovely sculpture. I can hear my mom, “I’ve seen it all now – a spaghetti sculpture!”

So what exactly is this phenomenon known as gravity that causes everything to drop to earth?

Gravity is an attraction that occurs between all matter. So while there is an attraction between me and my computer (other than facebook!) our masses are too small relative to the mass of the earth to feel it. The earth on the other hand due to it’s huge mass has a gravitational pull on all of us, causing us to stick to its surface.

In 1666, Sir Isaac Newton first stated his theory of gravitation. Here’s for the bit you hated in school:

The weight of an object is actually a measure of the pull of gravity on the object (Weight = mass multiplied by acceleration due to gravity). The Moon’s gravity is much less than the Earth’s gravity due to its smaller mass. As a result, a baby weighing 6 kilograms at home would weigh only one kilogram on the Moon! I have thought of flying to the moon to weigh myself but my mass obviously wouldn’t change. How crazy would I appear if I told everyone I weighed six times less than I do (I suppose I could try pretending I have light bones)!

If you’ve got a science question that you’d like Dr. Siobhan Kehoe to answer, feel free to ask below in the comments or on Facebook or Twitter.

Siobhán Kehoe has a PhD in Microbiology from the Royal College of Surgeons in Ireland. She has published over thirty articles in peer reviewed scientific journals and has acted as a reviewer for a number of journals, including The Lancet.
More recently, Siobhán has turned to fictional writing. She was selected for the Date with an Agent organised as part of the Dublin Writers Festival where she pitched her first novel The Thing About My Twin, written for 8-12 year old boys and girls. She has written features for HeadStuff and writing.ie and was long-listed in the RTE Guide/Penguin Short Story Competition. She currently writes a science blog for children, www.juniorscienceblog.com. Follow Siobhán on twitter @science_junior