MoneyConf 2015, Another Great Success by Those Web Summit Guys

MoneyConf ran in T13, in the Titanic Quarter in Belfast from June 15 – 16. It sounds like the kind of thing that would only be fun is you were a millionaire investor, a FinTech startup who wants to meet a millionaire investor, or a bank who wanted to keep up with the modern world by stealing the ideas of young entrepreneurs. I am the kind of guy who didn’t know what FinTech meant. The only thing I know about banking is my PIN code. Still, I went to MoneyConf and I loved the whole thing.

MoneyConf is the latest conference by the team who do Web Summit in Dublin (and now Rise and Collision which are in Hong Kong and Las Vegas). Basically these guys know how to run conferences.

The overall theme of MoneyConf was, “What is going on with money? How is it changing? Should we throw away our cash and credit cards? Something about BitCoin. And lots of techy and banky stuff that went over my head.”

To simplify it, cash is no longer king. We’re all going to be paying for things with our phones sooner rather than later.

I would simplify BitCoin, but really, I absolutely don’t know how to. It is non-physical computer money that somehow seems to have worth. Like it’s a currency… I don’t know. Cryptocurrency. That’s another word that I heard a lot.

But it was all fascinating. The speakers were excellent. It opened with Adrian Weckler (Tech Editor for Irish Independent) talking to John Collison, one of the Limerick lads who founded Stripe (which is valued at a few billion dollars). Collison is 25 and he proceeded to make me feel like the most inadequate person on the planet. He’s a multi-millionaire, genius guy who owns a massive company and he can play piano and fly planes. He was a good speaker too. If Collison wanted to be sound, he should never try anything new ever again for the rest of his life, just because he’s already brilliant enough, his collar needs no more stripes. He announced that Stripe are launching in four new European countries very soon; Sweden, Denmark, Finland and Norway, and that they are very interested in the European market and will be doing more business there in the near future.

I went to loads of talks and interviews and there were really great discussions about the future of money, and banking and tech and business. Those lads have it all figured it. Also I saw the Apple Watch being used in real life for the first time. Which made sense, if those lads didn’t have it, no one would.

I was also very interested in the startups that were exhibiting at the conference. There were 47 of them there, all with FinTech apps, websites or tools. A lot of them I didn’t understand, but then, I didn’t need to understand them, that doesn’t mean they won’t appear in my phone in a few years time.

I talked to an investor, Michael Walsh, from Green Visor Capital, which is a venture fund management company interested in FinTech Startups. He was there for the two days, he said it was a great conference and he would go again next year.

So, here are some of those great companies that I talked to: 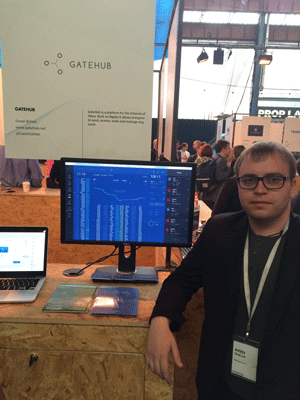 Gatehub is a platform for the internet of Value. Built on Ripple it allows everyone to send, receive, trade and manage any asset. It was represented by Anzej Simicak who was a lovely guy, and actually I ended up sharing a taxi with him later:

“I really like MoneyConf, we’ve made a lot of good connections and it’s been a happy, good experience.” 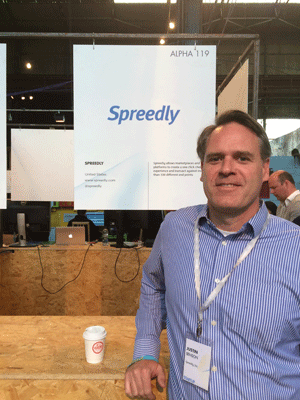 Spreedly allows marketplaces and platforms to create a one click checkout experience and transact against more than 100 different end points.

It was started 2 years ago by founder Justin Benson. He was a little underwhelmed by MoneyConf. Not so much the conference itself, which he said was a good conference, but that it wasn’t quite as suited to Spreedly as he’d have like.

“It’s too bank related… needs to be more narrow in focus”. 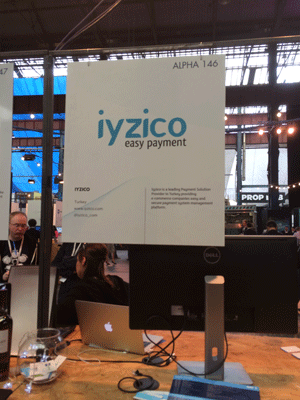 Started in 2012, in Turkey, Iyzico is “the Stripe of the region” according to Cagri (pronounced Charles) Goebayrak, Head of International Business Development. This was his first time in the U.K. (it took me a moment to realise that we were in the U.K), 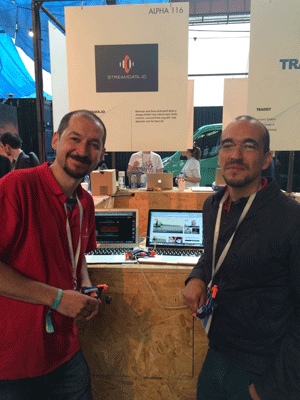 Because real-time animated data is always better! Our clients turn static content, sourced from any API, into dynamic content for best UX.

These guys, Nicolas Babel and Eric Horesnyi were the best! I stood and talked to them for about half an hour and they gave me two Nerf guns that I’ve been harassing my housemates with. They believe that the internet is about sharing (same as we do at HeadStuff), and now it’s possible to share real time data. The company started in 2008 with 5 years of R&D, and some sales and mergers going on, and it began to sell in 2014. It’s already on 250,000 devices, and they do everything in a way that’s good for the planet too.

“MoneyConf is really good, we’ve met a lot of people who want to add features, people are saying they need it (streamdata.io)… it’s a nice moment”. 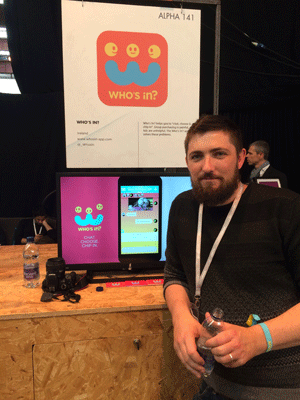 Who’s In? helps you to chat, choose and chip in. Group purchasing is painful. Ads are unhelpful. The Who’s In? app solves these problems.

I recognised the chap standing at the Who’s In? stall and it turned out that I had played tabletennis with him once – Dan O’Neill is his name. He was way better than me. But anyway, I talked to him, we have mutual friends, and then we talked about his app, and I love it. It’s basically like having a Whatsapp group, but with added PayPal. I have a lot of these kinds of groups where you’re trying to get a birthday present for someone and people are suggesting ideas and you have to go back and forth and it’s not easy, and that’s before money gets involved. This lovely app is going to sort all of that. They only started work on it around March 2015, so it’s not out yet, but they aim to have a Beta version out in about 6 – 8 weeks. You can sign up if you’d like to try it out here.

“MoneyConf is great, really intense, every conversation is valuable”.

(I notched that down as a victory). They’d met loads of people and set up meetings with potential investors and partners. Keep an eye on this one. 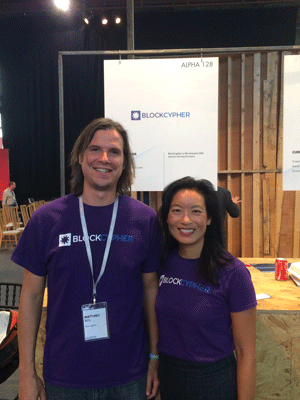 BlockCypher is like Amazon Web Services for block chains.

There was a pitch competition going on during day 2, and I caught some of the pitches, they were mainly very impressive. One of the pitches that I saw was BlockCypher’s Catheryne Nicholson. I could tell that she was excellent, that her company was good, they were building well and doing something useful. But I don’t know what a block chain is. Even after reading this Wikipedia page. Either way, despite my ignorance, they won the pitch competition. I didn’t know what that meant for BlockCypher, but then, Catheryne didn’t seem to know either, so it was grand. They’re a proper, usual startup, they’re based in Silicon Valley and they’ve raised 3.1 million dollars in funding. (She just said three point one, but I was getting used to this sort of language and I worked out that she meant $3,100,000, and then I played it cool and just took a note, it didn’t even seem like that was a big number to me, I think my facial expression probably said, “standard”.) Catheryne said:

“MoneyConf is great, it’s not like any conference I’ve been to before. I would definitely come back, Belfast is great, so friendly!”

I also caught the man himself, the founder of Web Summit and all these conferences, Paddy Cosgrave:

“When we did our first conference in Dublin, there was 400 people at it, and they were all from Dublin, this is our first one here and there are 1200 people from nearly 50 countries. So yeah, we’re delighted. They said it would never work in Belfast, but they said that about Dublin.”

Ep 10: A Noble Calling with Stephen Bradley and Deirdre O’Kane