Does Recreational Cannabis Change the Brain in Young People?

Yesterday a paper was published online in the Journal of Neuroscience which showed that even recreational cannabis smoking may affect the shape and size of certain regions of the brain. Of course this study got widespread attention in the media and I’ve seen headlines raging from the conservative “Casual marijuana use linked with brain abnormalities” right up to the scare-mongering headlines which attract readers such as “Casual marijuana may damage your brain”… Nowhere in this study did the authors even mention the word ‘damage’. It’s very likely that the latter journalists didn’t even read the paper. Lucky for you, I did!

This study carried out by a team based in the USA, looked at the effects of recreational cannabis use compared to controls (people with no cannabis use in the past year and less than five times in their lives) in forty young adults aged 18-25 years – probably college students who received a bit of cash to have their brains imaged. The people in the recreational cannabis group were those who smoked at least once per week but weren’t deemed to be dependent based on standard clinical questions to assess dependency.  So far so good.

What this study showed is that there were differences in the size and shape of certain brain areas in recreational cannabis users compared to the control group.  These regions were the amygdala and the nucleus accumbens, both regions have been shown to be important for addiction and reward in the brain. 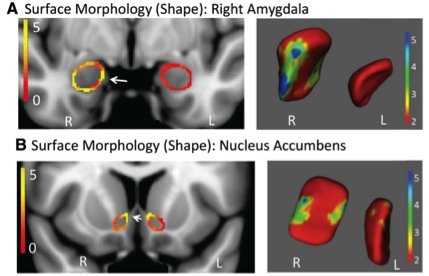 And here I could stop this piece and have told you all the information that there is in the study.

But of course I will continue and do my best to give you a non-exaggerated view of what this actually means. This study was very well performed with appropriate, non-biased analysis of brain images, the researchers were blind as to who was in each group. But it seems to me like they were on a fishing expedition of sorts. They took two groups of people and scanned many different brain areas hoping to find a difference in size or shape of brain regions. That’s not to say their findings are not interesting, similar results have been shown in animal models whereby structural changes in these brain areas have occurred when rats have been given drugs such as cannabis… it is worth mentioning that they have also seen similar effects for nicotine and alcohol addiction.

So are these changes observed in specific brain regions really due to recreational cannabis use? Or could we find similar changes for recreational cigarette smoking or alcohol consumption? I think it’s possible that what these researchers have found could be simply due to recreational drug use and not specifically to cannabis. Of course the researchers are aware of this issue and have done their best to control for these issues, with subject reporting their cigarette and alcohol consumption so that we could try to correct for these differences. I just hope these students are telling the truth when reporting this information. Looking closely at the data in the paper (you can too by clicking on the link at the beginning of the article) the cannabis users indeed drink more alcohol than the control group. There is no statistically significant difference, but it is borderline (for those who know their statistics the p value is exactly 0.05, any lower and it would have been significant).

This study is  simply a correlation between brain structure, size and shape and cannabis use. If indeed it proves to be true, then it’s a good start but what would be more interesting is the “how?”, “why?” and “so what?”. Here, I am asking a lot. Science doesn’t normally advance in huge leaps, its more baby steps. So I’m sure that this paper will lead to further research investigating this phenomenon and we will be able to understand if these changes are of any consequence for the recreational cannabis user. For now we just don’t know.

Irish cannabinoid expert, Dr. Eric Downer, who runs his own lab in University College Cork commented on this paper telling HeadStuff, “Researchers have used various methods to determine whether cannabis consumption results in brain atrophy or morphometric changes in adult subjects, and close examination of the literature indicates overall contradictory results on the effects of cannabis consumption on brain composition in adults. What is clear is that the components in cannabis have hugely diverse effects on brain function, disrupting neurotransmitter, neuroimmune and endogenous cannabinoid systems, which certainly contribute to the behavioural effects of recreational use”

So should recreational cannabis users worry about this new study?

Not really. Let’s take their word and say cannabis really does change your brain. Well so do a lot of things like drugs, disease and even learning. Reading this article has probably in some way changed your brain, the change is probably too small to measure but it just happened. Until more studies are carried out which show actual consequences of these changes in brain regions we don’t really know what this means for cannabis users.

Why Do We Get The Munchies?