In 1799 a French engineer stumbled upon what was to be one of the greatest archaeological finds in all of human history. On an expedition to Egypt with the purpose of undermining competitors’ trade interests to the East, an important stone covered in engravings was found and identified near the Nile Delta. British forces eventually overwhelmed the French in Egypt, and the artefact was transported back to Britain in 1802, where today it sits amongst the treasures of the British Museum.

The Rosetta Stone revealed much about the ancient Egyptians and Egyptian hieroglyphs, but today we find the namesake on-board one of the most audacious and interesting astronautical projects ever undertaken, which demands attention. The European Space Agency’s Rosetta mission represents a significant technological milestone for many reasons, so let’s start from the beginning.

Rosetta’s destination is a comet which was discovered by two Ukrainian astronomers in the late 1960s, and was the cause of some confusion on an ill-developed photographic plate. It was later revealed to be a remarkably serendipitous discovery which paved the way for our current mission. The comet, however, was not always the target for the mission, and was only second choice after the launch window for the original target, 46P, was missed.

Both comets belong to the well-studied Jupiter family comets (Details, for physics types) which represent reasonably accessible targets for probes. Whilst not the first spacecraft to ever visit a comet, Rosetta is the first to stay in orbit around one, and more ambitiously, to (touch wood) launch a lander onto its surface. This extended visit hopes to reveal information about the origins of the comet, its behaviour as it approaches its perihelion (closest point to the sun) and examine its constituent materials using remote sensing and various spectrometric methods, the composition of which will undoubtedly change as the mission progresses. The Philae lander (named after an Egyptian island upon which an ancient temple sat) will then make a daring trip from orbit to the comet’s surface, bury itself into the nucleus and use various scientific instruments to determine the history of 67P.

The story so far

On the 2nd of March 2004, from ESA’s Guianan spaceport, Rosetta left our planet with the aid of an Ariane 5 rocket, a frequently used launcher for satellite equipment. The spacecraft performed planned gravity assisted manoeuvres around the Earth in 2005 and in 2007 took a ‘Billion euro gamble’ as it passed into the shadow of Mars, where the solar cells could receive no power. Thankfully, the risk paid off, and after a further successful gravitational assist from our planet, was flung out towards its destination.

Along the way it has encountered an asteroid, 2867 Steins, passing just 800km from it, showing intimate details of the asteroid’s composition and attitude. It was revealed to be of a diamond shape, with science behind its topography proving to stimulate discussion in the community.

Rosetta entered a hibernation phase along its journey on the 8th June 2011, and prepared for a near three year hibernation period within which Earth would not have contact. Rosetta’s awakening after this lengthy slumber was a tense moment in European space exploration, with the video below showing the reactions of the mission’s technical staff after the signal was received (Skip to 1:30 for the reception). Personally, I remember watching the live stream for over an hour, and the whole thing was quite an emotional experience.

On its approach to 67P, Rosetta was surprised to find that the rock was in fact duck-shaped, which people speculated would make any attempt to ground the Philae lander more difficult. 67P, it is speculated, is a ‘contact binary’, potentially being formed of two drifting rocks which collided and merged at low velocities. This was a significant discovery which hadn’t been predicted by the science team before arrival.

Rosetta arrived at its destination on 6th of August, and began mapping the surface of the comet in an attempt to identify a suitable landing site for the Philae apparatus, as well as taking readings from some of the advanced science instruments on-board Rosetta. One such instrument, ALICE, which specialises in the measurements of inert noble gases, has revealed the comet to be extremely dark in UV wavelengths and with seemingly no exposed water. This comes somewhat as a surprise, as the comet was thought to contain ice patches due to its distance from the sun. Noble gases have the potential to reveal information about the origins of the comet, for instance if neon is detected we know the nucleus must have formed at temperatures less than 16K.

Five landing sites were shortlisted for further consideration upon initial mapping of the surface of the comet. In mid-September the most suitable one was chosen by the mission’s science team. And so the path is paved. 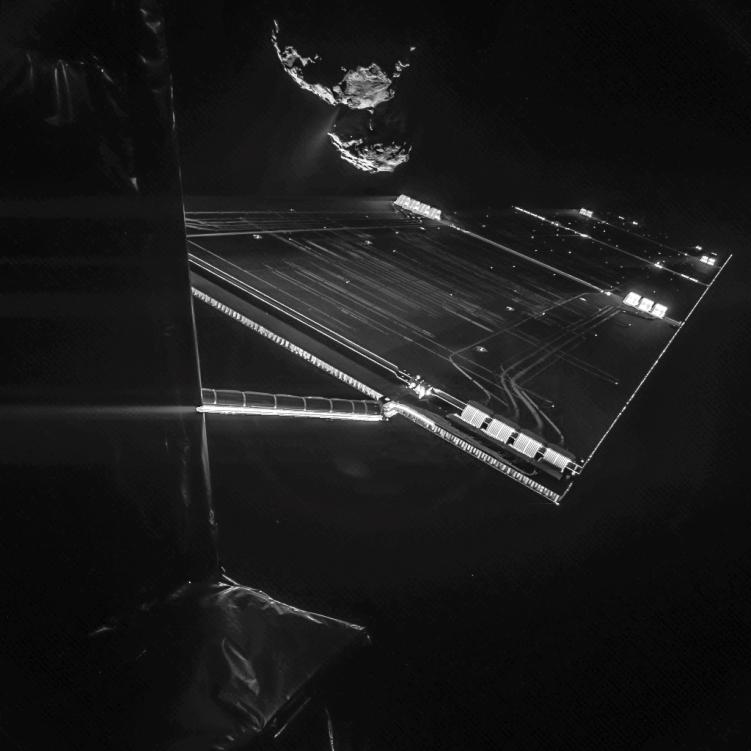 As I write, the latest from the mission was a selfie of Rosetta from just 16km above the surface of the comet released by ESA on October 14th, with the active ‘neck’ of the comet clearly visible. Two exposures were taken on October 7th and combined to generate a high contrast image, using some image processing techniques I hope to talk about at a later date.

Spirit, Opportunity and Curiosity are all scouring the surface of Mars, and with Lockheed Martin’s astounding MAVEN mission dipping into its upper atmosphere to search for indications of its paleoatmosphere, phenomenal amounts of new data have been and will be generated about our second nearest neighbour. These represent some of the most exciting science missions currently being undertaken, and probably deserve an article each in their own right. Space exploration is thriving.

Europe is not without its own Martian missions, with Mars Express adding massively to information regarding the planet’s shape and surface features. However Rosetta represents something unique about European space missions and is certainly something for everyone to be proud of. The value of such a mission is difficult to quantify, the tangible benefits of large scale projects such as this are frequently questioned. Outside of its promotion of European astrospace technology as disruptive innovation, which I think fully justifies its expense, economic arguments are hard to address. Regardless, the value to science is enormous. 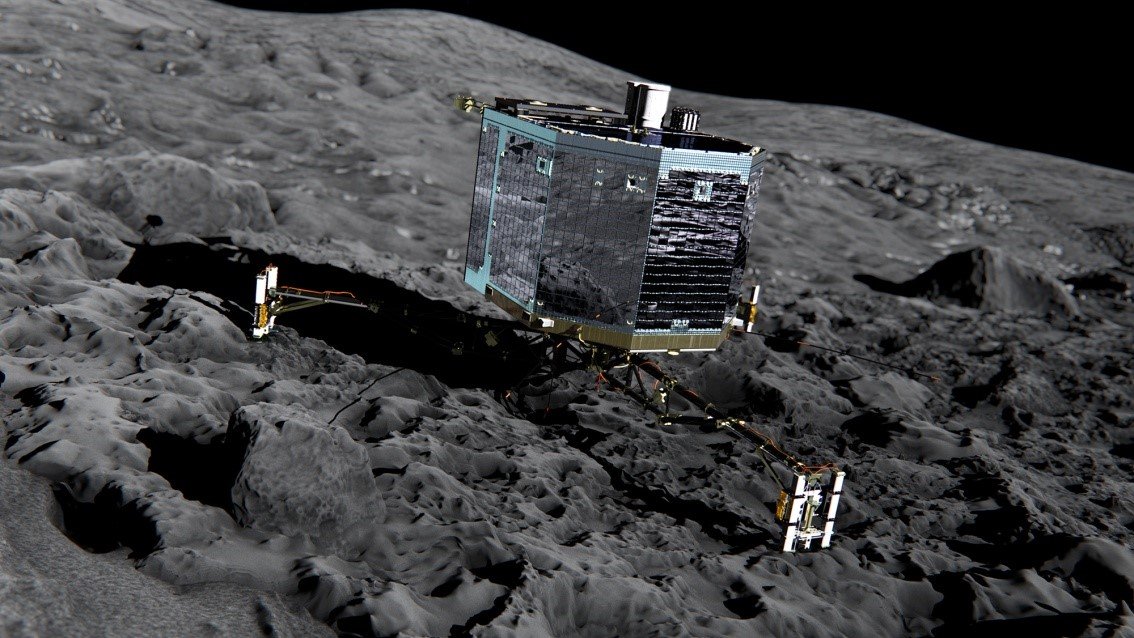 While the journey thus far has revealed much about the history of 67P, what is planned is incomparable with anything in the history of space exploration. On November 12th (could be revised) the Philae lander will be launched onto the surface of the rock, ice screws boring into its surface in order to secure it for a turbulent ride. COSAC and Ptolemy (amongst others) will whirr into action, returning data on composition and geology of the comet and will help to lift the veil regarding its origins.

How was the comet formed? What more can it tell us about our star? Does it contain igneous rock? What other surprises does it have in store for us? These are questions which will be on many bright minds in the coming weeks as the date draws closer, and I look forward to sharing in the excitement surrounding it.

You can keep up to date with the Rosetta mission at ESA’s site here.

Buttering Up – and other ways to lose your faith in humanity