Last week, in Dublin’s Science Gallery, Sea for Society delivered an evening of talks about and by people whose daily lives revolve around the ocean. Sea for Society is a European Project funded by DG Research & Innovation under the Theme Science in Society. They are partnered in Ireland by AquaTT (a not for profit company set up in 1992 to support the development of a sustainable Marine sector), the Marine Institute (the state agency responsible for marine research, development and innovation in Ireland) and the National University of Ireland, Galway.

The aim of the night was to give the audience a taste of the work in several aspects of people’s lives, who centre on the oceans as a way of life and their life’s passion. We were asked a question at the beginning, “what will your sea narrative be?”, in years down the line, and as we are looking back, will we be happy with what we have done for the oceans? We were told to “think global, act local”. We were also called “sea stakeholders”, we have high stakes in the condition of the seas and how we treat them now, will affect us all in the future. 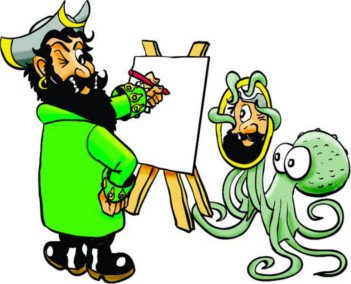 First up to the mic was Dr. John Joyce. John is a professional science communicator, published author and cartoonist with a background in marine science. He was also a major player with the Marine Institute until 2012. One of his most impressive endeavours is his drive to improve the “aqua literacy” of Ireland’s youth. He has tried and failed to get ocean sciences into the Irish primary and secondary curriculum but through creative and fun experiments he has put together a series of lessons that deal with pressure, forces and more all relative to the ocean that fit into the science curriculum. He is also responsible for setting up the Explorers marine science education programme which engages many kids with the science and wonder of our local shores and beyond. He continues to engage with today’s youth through his writing and cartoons as his alter ego Black John the Bogus Pirate.

Next up was Keith Duggan, an award-winning senior sportswriter with the Irish Times. He has written three books so far in his career, The Lifelong Season and House of Pain dealing with Gaelic Games and Cliffs of Insanity. In Cliffs of Insanity Duggan followed a crew of surfers over the winter season in 2010. Duggan describes the dedicated members of surfers who live for the thrills and escapism of catching the waves. The winter of 2010 was incredibly cold. He tells of how at -21 degrees Celsius he rang one of the surfers to see where they would be, expecting them to be at home or the pub, they were all heading straight out to the ice-cold waters because there was a good chance of big waves. One of the surfers he followed, Mickey Smith, directed the multi-award winning short Dark Side of the Lens and I recommend watching it for a truly inspiring look at the beautiful Irish coastlines and the life of a surfer. 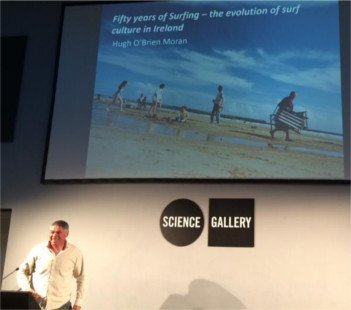 “The sixties were all about hippies, free love and the Beach Boys but not in Tramore”. Hugh O’Brien Moran, an Irish surfing legend and professional photographer was up next and his selection of pictures from the 60s through to today was a delight to behold. Hugh is a self confessed surf addict and gave us a run through of the story of Ireland’s surfing history. Through his historical photos and stories of world championships and inter-county tournaments he reminded us all that the oceans are a major recreational asset to our country. Keeping our beaches and oceans clean means that we keep our tourism up and keep the worlds greatest surfers coming back to our shores. Interestingly the first surfer in Ireland was back in 1949 when Joe Roddy handcrafted a 14 footer out of tea chests. Back in 2010 Joe Roddy rebuilt a replica of the board he rode all those years ago. Hugh pointed out the shape of Roddy in the pictures at 80 years of age and assured us that surfing is the greatest way to stay fit. I am not sure what age Hugh is himself but he certainly looked in better shape than myself. *Note to self: start surfing*

The science side of things were cemented by Dr. Margaret Rae, a researcher in the Beaufort Marine Biodiscovery Programme at the Marine Institute. Rae talked about the “real map of Ireland” and the surprising amount of ocean that makes up the true boarders of our emerald isle. Rae specialises in deep sea sampling which she conducts on the Celtic Explorer off the west coast of Ireland. At the price of 600,000 euro the vessel sets off on a 3 week mission to collect all kinds of samples using a remote operated vessel (ROV). As you may think, there is not a whole lot of places in the sea to pan out so microbes tend to attach to one another. This bonding is very important for scientists who are looking at these characteristics of the marine-derived microbes and how they can be helpful in medical developments. Rae was asked on the most interesting thing that she came across in her work and Rae described the sheer volume of colour in the Irish seas as truly outstanding. The multi-coloured views of Caribbean coral reefs may not be off the Galway shore but the level of vibrant greens, reds and browns would amaze anyone. One of the facts that hit home, and hit home hard, was that 50% of the oxygen we breath is produced by the plant life in the oceans. To keep our oceans thriving and healthy we essentially keep ourselves breathing.

The night of talks closed with Hugo Tagholm. Tagholm has been the CEO of Surfers against Sewage (SAS) since 2008. SAS are a charity created by surfers who were fed up of regular sewage slicks and sanitary debris at local surf spots. Since 1990 SAS has been growing and now boast an impressive 15,000 community volunteers and are the second biggest surf-enviro organisation in the world. On October 2013, Surfers Against Sewage campaigners were accompanied by double Brit Award winner Ben Howard to deliver the Protect Our Waves petition to No 10 Downing Street, representing the call of 55,000 surfers for better protection of UK waves, oceans and beaches. SAS also released a new economic survey highlighting the £1.8 Billion value of UK surfing to call for increased action to protect our waves. 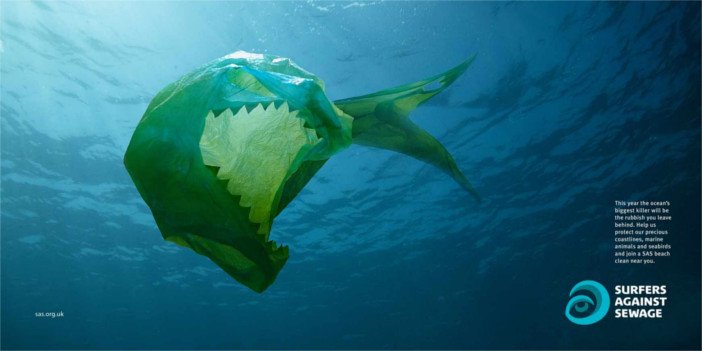 Tagholm’s passion and drive was clearly evident as he gave his talk. This surfer is now rubbing shoulders with the country’s politicians to make the oceans a better place for everyone. With the publicity they receive by turning up to protests and rallies in full wet-gear with surfboards in hand, they have made a name for themselves in the world of activism and national politics. They are currently tackling the problems of marine litter (which Tagholm noted as one our Earth’s biggest problems) and water quality at some of England’s beaches and streams.

Overall the talks were informative, interesting and filled with great stories of those whose lives revolve around the ocean. We all left rethinking that initial question posed to us, what will our sea narrative be?