One million of us dear humans are going to Mars. How? Elon Musk’s very large rocket. No seriously, Musk is building a rocket bigger than a football field to fly to Mars. This isn’t the first outrageous task Musk has set his enormous brain to, but it probably is the most ambitious. Musk’s company SpaceX has made enormous strides since its inception in 2002 and now it plans to build a giant reusable rocket which will eventually lead to a one-million-person colony on Mars starting as early as 2023. Is he crazy? Naaa, he’s Elon Musk, the real life Tony Stark! (well maybe just a little crazy).

To honour this grand announcement HeadStuff is running a short story competition inspired by NASA’s Jet Propulsion Laboratory’s Mars poster from their Visions of the Future series. 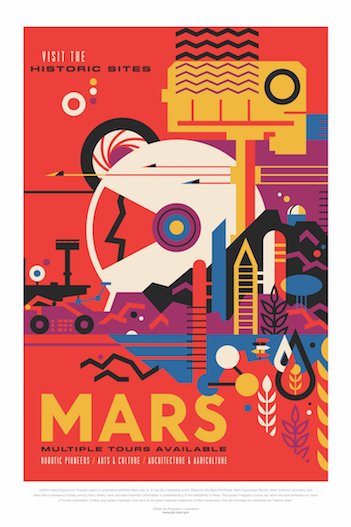 Short stories featuring the Red Planet in some way and up to a maximum of 1000 words should be emailed to [email protected] by November 20th. Get as imaginative as you like.

The 4 best stories, as judged by a selected HeadStuff contributor and editor panel, will be published on HeadStuff and open to public vote. The overall winner will have the eternal honour of being a champion and we’ll rustle up some HeadStuff goodies to sweeten the deal.

Space Week | From Science-Fact to Science-Fiction, Space Films Show Us Mankind’s Obsession with the Stars

Shots of Science – Plate Up for Food Psychology