What’s Going on in the Cuckoos Nest?

You might have heard that certain species of cuckoo are “nest parasites”. One such species is the great spotted cuckoo (Clamator glandarius) that lays its eggs into the nests of other birds like the carrion crows (Corvus corone corone). The host crow parents raise the unrelated cuckoo chicks and typically suffer partial or complete loss of their own brood. This is the common view about nest parasitism.

Many host species have evolved protective behaviors, like rejecting the parasite eggs, against nest parasitism. But other species, like crows, show no parasite avoidance behaviors and tolerate cuckoo chicks among their own brood.

This raises an evolutionary paradox: if the cuckoo were a mere parasite, after generations laying their eggs in other nests, the victim species would have either evolved defenses or extinguished.

In a long-term study (16 years!) published in the 21st March issue of Science, Canestrari et al. help explain this evolutionary paradox. They show that cuckoo “parasitism” isn’t always a bad thing for the cuckoo’s hosts. Parasitic cuckoos can protect “step-siblings” from predators by releasing a stinky substance.

Thus, when there are few predators around, cuckoo parasitism reduces crow fitness. On the other hand, in periods of high predation pressure, the presence of cuckoos in crow nests tends to mutualism, as it improves the crow’s breeding success.

After all, it is in the evolutionary interest of the parasite that its host thrives.

These results emphasize how much species’ interactions depend on the environment, and how faint are the borders between parasitism, commensalism, and mutualism.

“This secretion [released by the cuckoo chick to repel predators] is really disgusting and difficult to describe. It’s pungent, long-lasting, and it burns your throat slightly. If you get the substance on your hands, it’s really difficult to get the smell away. Even if you wash your hands, it takes hours to get off.” (Nasty. It’s crazy what people do to get their picture in Science!)

This research was carried out by a collaboration of Swiss and Spanish universities, by studying the nests of carrion crows in northern Spain. Studied nests included those parasitized by great spotted cuckoos, and others that were not. In addition, researchers added a cuckoo chick to non-parasitized nests or removed it from some parasitized nests. In the report, they include this figure showing that the presence of a cuckoo chick leads to a higher proportion of successful crow nests.

In summary, cuckoos seem to follow a general principle of the biology of parasites: if you don’t want to get kicked out, become indispensable. Darwinian dynamics enable a species to overcome the burden of another species under certain conditions, or during certain seasons. Through hard times, the cuckoo has to return the favor. House rules… 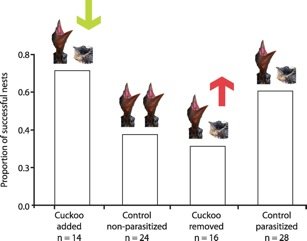 This graph shows the probability of success of a nest in the different experimental conditions in the study. Image source: Canestrari et al. 2014)

Bernat has a MSc in Neuroscience & Cognition and he's in the 4th year of a PhD degree. His research is about how neurons communicate, particularly the modulation of neurotransmitter release.