Social Distancing – The Hard Hat of our Time

It was the height of the Celtic Tiger and funds were tight. There was no way that I was going back to the bog for another summer so it was the building site for me. Mullingar was booming, but I wouldn’t get a sniff without a Safe Pass. There was a new focus on safety and everyone had to attend a course and get the card.

No bother. A day out in the Greville Arms listening to a lad ramble on about power tools, scaffolding and dumper tickets. An unskilled psychology student, enthusiastic but with embarrassingly soft hands, all I needed to remember was: boots, hard-hat and hi-viz vest. I bought the lot and got the free lunch into the bargain.

Monday was the start day. There were four of us in the summer brigade, and the foreman took us through the site safety rules. “Protocol lads” we were told. We listened attentively, the glare of our crisp hi-viz vests blinding him. Formalities complete, he led us down the site to be greeted by a scene from a 1990s ‘Diet Coke Break’ advert. Bare chests on show, hardhats discarded like wrapping paper on Christmas morning, scuffed white Nike runners abound. The real rules were unwritten and we hadn’t got the memo. Bad enough rocking up with our soft hands and GAA jerseys, we didn’t want to stand out even further, so we followed suit. Day one, we learned to do what we see, not what we heard.

Regardless of the rules, we tend to be influenced more by what we see others doing than what we are told. Policies, rules and directions have a role to play but we cannot deny the irresistible temptation to model the actions of others. This becomes amplified when you’re unsure of expectations.

Think back to your first day at secondary school, the trepidation of not fitting in and the feeling that you are the odd one out. Sally Rooney captures this beautifully in her book ‘Normal People’. We take our cue from the behaviour of others and we change our clothes, our habits and even our music tastes in order to fit in. We are social animals and what we do influences others. Particularly in periods of uncertainty.

Understanding this phenomenon becomes even more crucial as we enter the “fuzzy” stage of our collective response to COVID-19. Until now measures have been very black and white. Everyone stays at home apart from the most essential services. We value clear direction, and with consistent guidance it leads to widespread acceptance and compliance. We don’t experience dissonance and take comfort in the fact that we’re in this together. 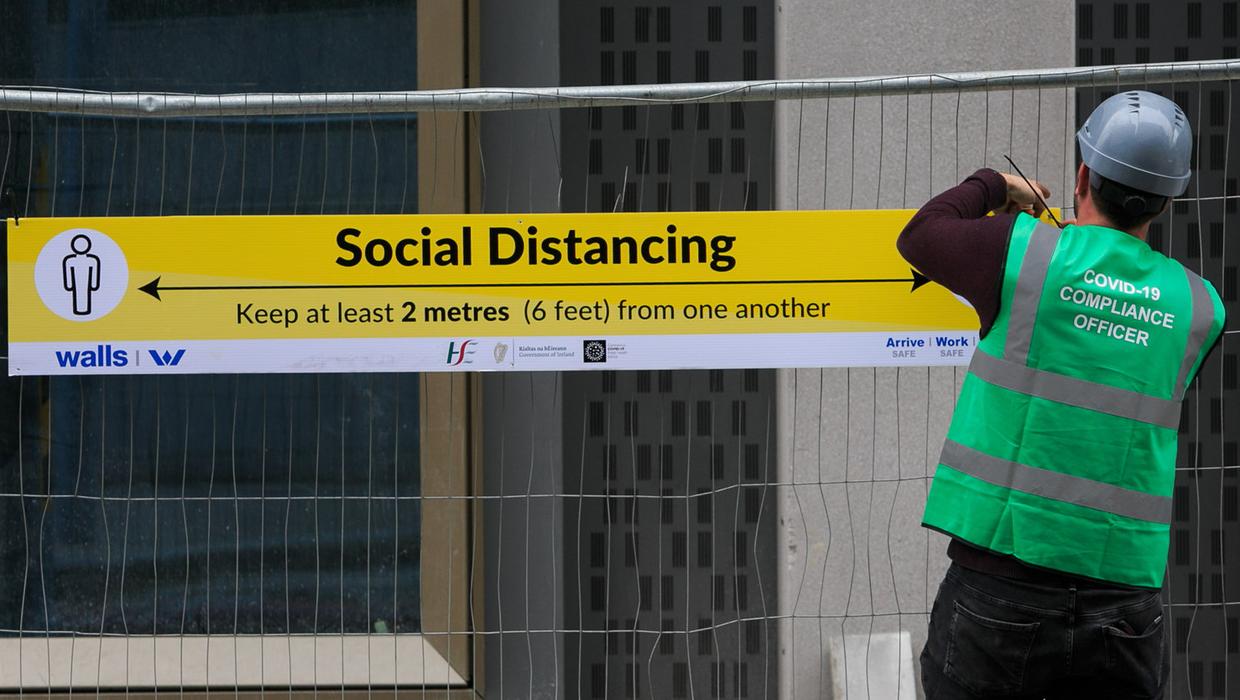 The culture until now has broadly been one of togetherness. Step out of line and you are the aberrant one. Keep your distance. Stay at home. Cohesiveness and accountability kept us strong and when it didn’t, increased Garda presence and enforcement ensured that those stepping out of line were corrected. This increased presence reminds us that despite the power of vicarious learning, we still require some level of consequence to ensure guidance is followed.

Shortly after the end of June, our building site had a spot visit from the Health and Safety Authority. Hard hats were scrambled for and hi-vis vests thrown on upside down and back to front, but the HSA had already seen enough. The site was forcibly closed.

Returning a week later, helmet hair was in fashion and les gilets jaune worn all round. The fear of another closure kept everyone in line but the cultural norms of the site also shifted. The hardiest bucks on site were now pulling up the soft-handers for not wearing their hard-hat. Conversations in the cabin scoffed at other sites getting closed because they hadn’t seen the light. A Tipping Point had been reached.

Safety behaviour has improved dramatically since those lawless Celtic Tiger days. Non-compliance is no longer tolerated. The construction sector fatality rate has dropped from 14 deaths per 100,000 workers in the late 1990s down to half that in recent years. Hard-hats the norm rather than the exception.

Messaging leans on the merits of safe practice as well as the threat of penalty for non-compliance. It was interesting to read signs at the M7 roadworks in Naas recently. As well as the “No Boots, No Hard-Hat, No Hi-Vis, No Job” message, billboards of children asked us to “Please Slow Down, My Dad Works Here”. Social influence nudges behaviour for that one vulnerable person. Personalising the message keeps us focused.

Social Distancing is the hard-hat of our time. It is uncomfortable at first but it will keep us safe. While some of us require the threat of consequence to adhere, most of us will watch others for cues.

Our adherence doesn’t just keep our loved ones safe but influences those around us, making it the norm. We dream of summer days in the future to re-create our own Diet Coke ad safely but for now, we’ll keep our tops and hard-hats on.

Pádraig Walsh MSc, BCBA is a Behaviour Specialist and CEO of actualiseacademy.com and co-creator of The Behavioural Vaccine Podcast available across all podcast platforms.

Pádraig Walsh MSc, BCBA is a Behaviour Specialist and CEO of actualiseacademy.com and co-creator of The Behavioural Vaccine Podcast available across all podcast platforms.