For fans of Mass Effect, November 7th is a day where the community comes together and celebrates the phenomenally successful video game series. The event is known as N7 Day, which is also the date when the N7 training programme began in the Mass Effect Universe. Fans submit their cosplay photos to the website, avail of specially released content, and can compete in special in-game challenges to win prizes. 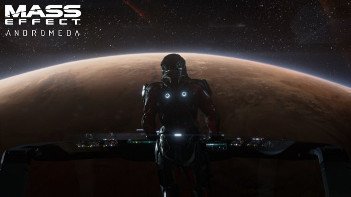 N7 Day is always huge for the Mass Effect fandom, but this year there was a special surprise in store – the trailer for the next chapter in the series, Mass Effect: Andromeda. The trailer had the female version of the franchise’s hero – Commander Shepard – narrating, and confirming once and for all that the new game will have a new lead character.

Mass Effect was created by the Canadian video game developer BioWare, which is currently owned by Electronic Arts. In addition to its incredibly immersive storylines and emphasis on relatable characters, BioWare has been lauded in the past for the interchangeable sex of their main characters. When playing Mass Effect, for example, it is possible to play Commander Shepard as either male or female – a bit binary, but still better than what’s on offer in other games.

Take the ridiculous comments from the creative director of Ubisoft, who out and out said that animating playable female characters was “too difficult.” This gave many gaming fans the opportunity to make fun of the company in manners both hilarious and imaginative. Ubisoft have since introduced a female character to their range of Assassin’s Creed games in Assassin’s Creed: Liberation, but complaints were made about the fact that this was merely a tie-in game, and that its initial release was relegated exclusively to handheld devices.

In a world where women are often trophies to be won during gameplay, how refreshing it is that BioWare not only made their main character playable as female, but also used her voice in the N7 trailer! Unfortunately, not everyone is happy with this decision, and quite a few male gamers have taken to the internet to cry about their problems. 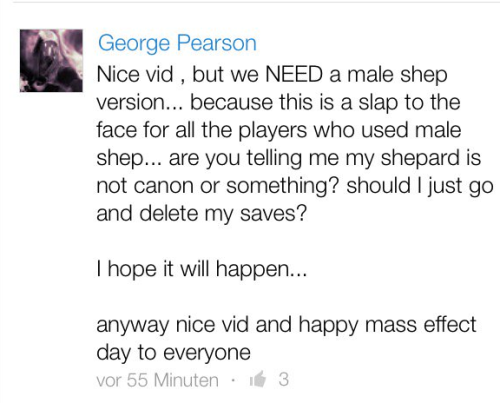 Sure buddy, delete your saves…

“He was clearly a he” – Well I mean, he probably was if you played him as male? But for thousands and thousands of other players, their Shepard was, and always will be, a woman. Who are you to say that Shepard can only ever be a man? What are you basing your theory on? Perhaps you’re working on the assumption that Shepard was designed as a male character first and then the female Shepard was tacked on to appease the ladies. If that’s the basis of your obnoxious world-view then buddy, have I got news for you. BioWare always planned on the character being playable as either male or female, and they did the animation for the female Shepard first. Technically, she has seniority.

It’s a dangerous fallacy that many male gamers have bought into, with toxic results for women. Look at what happens to the women who speak up against the problem of sexism which pervades many video games.

Anita Sarkeesian, a video game vlogger, received death threats, rape threats, and so much harassment that she was driven from her own home. There has even been an online game created where you can punch her repeatedly in the face. Zoe Quinn, a games journalist, was the main target of ‘Gamergate,’ a “protest movement” that likes video games just as they are, thanks, and felt the need to establish that fact by viciously attacking women involved in the industry. Quinn was also driven out of her home by death threats, rape threats, and one person who claimed they had hired a private investigator to stalk her.

These vicious internet trolls believe that women have come to take away what is theirs. The real irony is that women have always played as much video games as men. A tumblr user (whose account has since been deactivated) put together an incredible timeline of evidence demonstrating that women have been avid gamers since the dawn of the video game.

In 2014, a survey from the Entertainment Software Association established once and for all that adult women actually outrank teenage boys in numbers when it comes to playing video games. And it doesn’t end there. A recent study in 2015 shows that more women than men own gaming consoles, which pairs nicely with another study demonstrating that more women than men play video games on PC.

Why don’t we hear about this? Probably because whenever women talk about playing video games, or reveal themselves as female online, they receive harassment of one form or another. 63% of women who took part in this survey stated that they were attacked when they revealed themselves as female – some to the point of ceasing to play their game of choice entirely. It is amazing that women can be the majority players of video games, but still receive harassment of such pointless vitriol that there is a pervading stereotype that few female gamers exist at all.

Women aren’t “taking over your video games,” women have always been gamers and the gaming industry continues to flourish. As the hugely successful Mass Effect franchise has demonstrated, diversity brings new stories to the fore, and makes for better, more immersive games than your typical, dude-bro mindless shooter.

Perhaps male gamers are scared that one day they’ll wake up to a world where only 9% of newly released games are solely male-led, and any man who points out the discrepancy will be immediately viciously attacked for merely airing his views.

What a scary thought.

Méabh de Brún is a writer, actress and professional hot mess. She has a degree in International Law, a Masters in Writing and recently finished a turn as a member of the Gaiety Performance Theater Company. She also plays the ukulele. No big deal.

Exhibitions: ‘Finders and Keepers,’ ‘Off the Wall,’ and ‘Join the Dots’