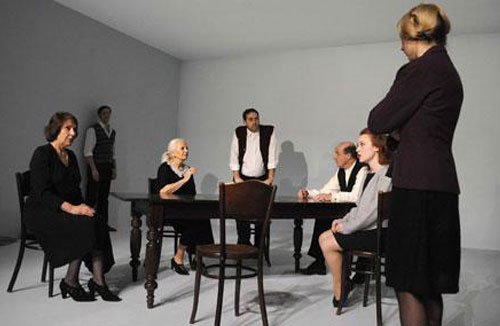 Tell her it’s a game

The current onslaught on the people of Gaza, the latest in a series by The Israeli State and Defence Forces, shows:

That if they wish they could blow the people of Gaza into the sea of oblivion. Perhaps that is what they wish.

But don’t frighten her

Don’t tell her they’ll kill her

That this onslaught does not stop the activities of Hamas and other militants, which include the firing of rockets into Israeli cities.

Tell her they don’t understand anything except violence

That this onslaught is resourced by the highest level of military might on the planet, supplied at commercial rates from the biggest economies. That the onslaught makes profit for those economies.

Tell her something about the men

Tell her they’re bad in the game

Tell her it’s a story

That Gaza is a densely populated strip of Mediterranean coastal land squeezed into a corner of an arc of land that runs from modern day Turkey south into the Arab lands towards the Gulf of Aden, east into Iran and west towards Morocco.

Don’t tell her Arabs used to sleep in her bedroom

That there is an immense amount of oil and gas under the ground in all of these lands.

That religious fundamentalisms of a variety of hues characterise these lands and give succour to forms of social and political organisation that are hypocritical, despotic, exclusive and apartheid-like.

Tell her there were people who hated Jews

Tell her it’s over now

Tell her there are still people who hate Jews

Tell her there are people who love Jews

Don’t tell her to think ‘Jews’ or not ‘Jews’

Tell her more when she’s older

Tell her how many when she’s older

That there is a 20th century history of genocide in the recent memory of the dominant people in the state of Israel that underpins the belligerence of the state and rationalises acts of extreme violence and aggression in the name of defence.

Tell her we want peace

That worldwide demonstrations are necessary to say that the killing of children is wrong. Otherwise there is a question as to whether we can call ourselves ‘human’.

Tell her they’re attacking with rockets

Tell her only a few of us have been killed

Tell her the army has come to our defence

Tell her the Hamas fighters have been killed

Don’t tell her about the family of dead girls

Tell her you can’t believe what you see on television

Tell her we killed the babies by mistake

Don’t tell her anything about the army

That without a thorough-going dismantling of the international arms industry the onslaught will recur.

Don’t tell her anything about water

Don’t tell her about the bulldozer

Don’t tell her not to look at the bulldozer

Don’t tell her it was knocking the house down

Tell her it’s a building site

Don’t tell her anything about bulldozers

Don’t tell her about the queues at the checkpoint

That the dismantling of the arms industry will mean job losses in the major economies, job losses for which the economies and their people are not ready.

That the onslaught must stop. That all people must be safe. And free.