Abortions happen. Even if you are one of the vocal few who fiercely believe that life begins at conception and a woman’s rights should be secondary to a foetus, you can’t deny that abortions happen, even in Ireland.

Despite the fourteen year prison sentence for abortion that was introduced in 2013, 1,017 abortion pills were seized by Irish customs in 2014. We don’t know how many got through. 10 women a day with Irish addresses present at clinics in the UK. It’s in no way unreasonable to assume that these numbers are higher because some Irish women, out of fear, will give a false address. And of course, we can’t know how many women have illegal, clandestine abortions here because they can’t afford to go to a clinic – the procedure alone costs about €800, and there are flights and accommodation to consider as well.

What’s happening in Ireland is no surprise to anyone familiar with high quality, peer-reviewed medical research.

In 2007, scientists from the World Health Organisation carried out a massive, worldwide study of abortion – probably the most comprehensive research yet performed on the subject. In countries where it was legal at the time they collected official national data, and in countries where it was illegal they carried out interviews with local family planning experts, surveys of women in the area, and collected data from hospitals about women who had been admitted for abortion complications.[pullquote]The study proved that criminalizing abortion does not stop it happening. Not only do anti-choice laws fail to prevent abortions, they don’t even reduce them.[/pullquote]

The research was peer-reviewed and published in The Lancet, one of the most prestigious medical journals in the world – research doesn’t get to The Lancet unless it stands up to intense scrutiny from global experts. And the study proved that criminalizing abortion does not prevent it happening. It wasn’t the first time research had found that when women need abortions they have them, regardless of the law. But this research has also shown that rates of abortion are not lower in countries where it’s illegal – in fact, the lowest rates of abortion are in countries where it is most legal and available. Not only do anti-choice laws fail to prevent abortions, they don’t even reduce them.

But here’s what they do: they put women in danger. Research has proven again and again what should be intuitive – where abortion is legal it is safe, and where it is illegal it is unsafe. 14.5% of global maternal deaths are due to unsafe abortions, and almost all of these deaths happen in countries with restrictive laws. In South Africa, abortion-related deaths fell by 91% when it became legal.

In Romania, abortion was abruptly criminalised in the sixties and abruptly decriminalised in the nineties, with correspondingly abrupt changes in deaths of pregnant women. Mortality rates shot up from 15 deaths per 100,000 to 140 per 100,000 in just a few short years when abortion became illegal – even though other maternal health services improved at the time – and dropped dramatically when safe abortion became legally available again.[pullquote]Portugal, where abortion is legal and widely available, has one of the lowest abortion rates in the world.[/pullquote]

Some people fear that, were abortion more acceptable, people would make the choice rashly, using “abortion as contraception.” The misogyny simmering beneath this argument is unmistakable – women can’t be trusted – and, as reported in the International Journal of Gynaecology and Obstetrics this month, decriminalising abortion doesn’t increase abortion rates. In France and Spain, minor increases in abortions happened for two to three years after it was legalised, but this was probably explained by the fact that secret abortions are always underreported. Since then, rates have dropped, and Portugal, where abortion is legal and widely available, has one of the lowest abortion rates in the world. 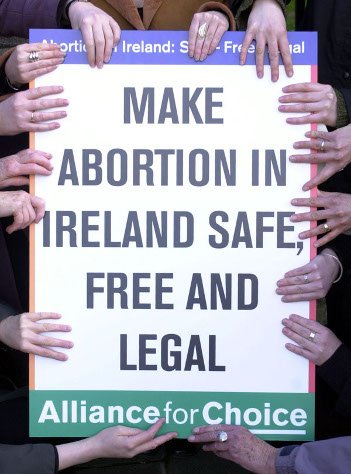 International, peer-reviewed medical research proves again and again that criminalizing abortion does not prevent it from happening. Rather, it puts women in danger by forcing them to seek unsafe, illegal abortions when they could and should be having safe procedures and medical care in a clinic. This leads unavoidably to the question of what so-called ‘pro-lifers’ really want. The fact that anti-choice laws do nothing but stigmatise and endanger women is so well proven that it’s hard to believe that anyone involved with the struggle for abortion rights – even those vehemently opposed to them – doesn’t know that this is the reality.

But this is the reality, and it doesn’t tie in with the carefully stage-managed rally for life, and the lovely posters claiming that the hordes of people protesting against women’s freedom “Love them both.” The only thing proven to reduce abortion is contraception. In 2012, Dr Jeffrey Peipert led a study published in the Journal of Obstetrics and Gynaecology concluding that abortion in the US could be reduced by up to 75% if contraceptives were free. In that same year, The Lancet reported that the abortion rate in Western Europe, where contraceptives are widely used, is 12 in 1000. In Eastern Europe, they are not, and abortion rates are 43 in 1000.

No contraceptive is 100% effective, so there will always be a need for safe abortion. But if the ‘pro-life’ movement are about reducing abortions, why aren’t they handing out free condoms and pills? If it’s about babies, why is it that the voices who have most vociferously opposed abortion in this country are the same groups who all but demonised pregnancy by putting unwed mothers in laundries, and demanded that even married mothers be “churched” to have “the sin of childbirth” washed away by a priest before they could come back into the church and the community?

Neither does this tie-in with the pro-life group’s most recent façade of being ‘pro-woman.’ It’s no accident that their spokespeople are female, and that much of their efforts are centred on a distorted picture of how abortions are ‘bad for women.’ Press coverage of this year’s March for Choice – the biggest yet – was accompanied by a quote from Cora Sherlock claiming that “Pro-choice activists are ignoring the many women hurt by abortion.” In fact, it is Sherlock’s side who are doing just that, ignoring the inconvenient truth that their tactics are endangering women without reducing abortions.[pullquote]Medical research contradicts the pro-life group’s claims, showing that only 2% of women regret their abortions.[/pullquote]

Breda O’ Brien claimed in The Irish Times that “women talk to me about their abortions all the time,” for a piece in which she put forth the common anti-choice argument that “many” women regret abortions. Medical research contradicts this, showing that only 2% of women regret their abortions. It’s also a bit of a stretch to imagine that Ireland’s best known far-right Catholic would be the natural confidante for women to tell their abortion stories to. 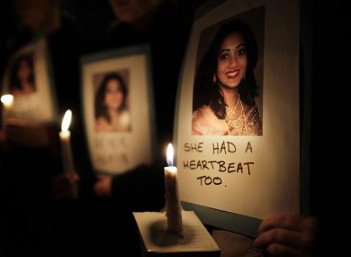 While anti-abortion female spokespeople use the fact that a very small minority of women do regret abortions to justify a blanket denial of abortion rights to all women – and pay for ads from womenhurt.ie to pop up alongside your newsfeed – anti-choice activists are ignoring and avoiding more uncomfortable questions. How can they justify standing over the status quo after Savita, Sheila Hodgers, the X and Y cases, and all the untold suffering which never made it into the news? How can they say it’s acceptable that the Abortion Support Network has had phone calls from women asking how they can crash their cars to miscarry without killing themselves, and then claim not to be anti-woman?

It is because safe and legal abortion has been so comprehensively proven to reduce harm to women without increasing abortion rates. FIGO, the International Federation of Gynaecology and Obstetrics, even supports the call for wider access to safe legal abortion. But of course, a global organisation of medical experts wouldn’t know as much about medicine as Ronan Mullen.

Why #WakingTheFeminists was so much bigger than theatre

A Poem About Ireland’s Abortion Laws | I can do horror