Meet YouTube Red – the new monthly subscription service that allows you to watch all your favourite videos ad-free for just $9.99 a month! Wednesday will see audiences in the US get the chance to sign up to this new service; finally rescuing them from those pesky few seconds of irrelevant content prior to the viewing of their desired video. 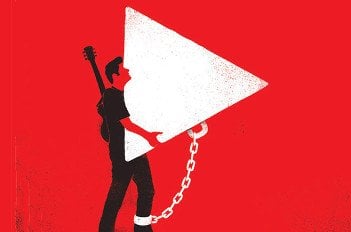 According to this ad promoting the service, YouTube Red will provide “A new way to amplify your YouTube experience.” It will also allow you to save videos for offline viewing, give you access to Google Play Music, and even let your video keep playing when you close the app. To some, all of this sounds great – it’s the subscription service they’ve always dreamed of, the ad-free site they’ve always imagined, the revolution they’ve been waiting for. And others? Well, they’re not so impressed.

Last week, YouTube held an event in LA where they announced all of their big plans for Red. American viewers will be able to start watching ad-free videos this week – with the rest of the world following suit some time soon – but this isn’t the only major change the site has in store for those of us willing to spend an extra tenner a month to stream things on the internet.

By the end of this year, YouTube Red will be creating and streaming their own Original content, reserved only for paying subscribers. The initiative plans to pair online stars – who are already making money on the site thanks to ad revenue – with some other film and TV stars from Hollywood. Think Netflix Originals but on YouTube… It’s kind of the same thing. Even though chief business officer Robert Kyncl says it definitely isn’t. “To us what is important is we are not doing what everyone else is doing” he says. “We are looking for people who are proven to work really well on our platform.”

This not only means that some YouTubers’ content will become exclusive to YouTube Red users, but also that the quality and production value of this content will be (presumably) considerably better than everything else already on the site. Home-grown star Felix Kjellberg – better known as ‘PewDiePie’ – has already been booked for the service. The Verge reported that the comedian will be working alongside The Walking Dead producer and creator Robert Kirkman some time in the near future to produce a series called ‘Scare PewDiePie,’ where PewDiePie will be scared by some horror-related things and people will be entertained by it.

So according to Kyncl, YouTube are going to take some big stars and make them even bigger. Even those who have yet to be approached by Originals – or decide whether they even want to be involved – are apparently still going to benefit from this new subscription service. As it stands, YouTube gives 55% of their advertising profits to the creators of the videos it hosts. They claim that following the launch of Red, the site will continue to give a majority of subscription revenue to its users too.

Even though YouTube’s exact cut from this profit has yet to be disclosed to the public, surely some additional subscription revenue on top of all those adverts non-subscribers still have to watch is good for everyone, isn’t it? Isn’t that why a massive 98% of YouTubers agreed to their content existing behind a paywall in the first place?

Apparently not. YouTube representatives have been sure to let everyone know that content creators who would rather not include their videos in the subscription service can opt out… By having their content made private, and inaccessible by everybody on the site. Speaking to tech site Gizmodo, one rep said:

Today, the overwhelming majority of our partners, representing nearly 99-percent of the content watched on YouTube, have signed up. Videos of partners who don’t update their terms will be made private.

Of course the majority of users are going to opt-in if the alternative is having their videos essentially removed from the website. What other choice do they have? YouTube’s watch time increases by 60% each year, with over 400 hours of new content being uploaded to the site every minute. That’s a lot of content. And that’s a lot of users to watch that content too.

Hypothetically, if YouTubers like Arden Rose, Acacia Brinley, or Sophie Foster weren’t too happy about potentially losing out on ad revenue due to Red’s new subscription service (which they aren’t), chances are they’re going to give YouTube permission to use their videos anyway. It’s the biggest video hosting site in the world. They might as well.

Is YouTube red trying to get us out of a job

Content creators aren’t the only ones less than excited by all these new changes. Despite YouTube’s dedication to user satisfaction, it appears that many users aren’t impressed by, or interested in, YouTube Red at all. A quick scroll through the comments on almost every article, interview, or advert promoting the service suggests that a lot of people simply won’t be paying $9.99 a month for something they’ve been getting for free for years – ad-free viewing.

“How is there not a single mention in this article of ad-block software?” asks user Mr XBob. “Google surely know that a massive portion of their current audience already understand how to easily block ads…” Yes, they probably do. But as others were quick to point out, such software is not as readily accessible on tablets, iPhones, Androids, or game consoles.

Neither is it a viable option for those who are morally opposed to blocking ads and its potential subsequent block on revenue. However, the one thing most of these users seem to have in common is that when the time comes they won’t be forking out for YouTube Red.

And yet, at the same time, a lot of users will. According to The Verge, if just 5% of YouTube’s viewers in the States sign up to the service, the company will see an increase of over one billion dollars per annum. Compare this to Spotify’s 25% user conversion rate from free to premium last year, and a mere 5% doesn’t seem like too much of a feat. And as YouTube spokespeople have been repeatedly pointing out this past week – YouTube isn’t just music, it’s video too.

So what does all of this mean for the average user who just wants to watch the odd cat compilation every few days? According to Kyncl, not that much. The company’s chief business officer has been busy ensuring us all that YouTube is not changing; it is simply growing. “There is nothing we are taking away from there, merely adding onto it.” Realistically, we probably won’t know exactly what that means until the full subscription service has been rolled out worldwide. Until then, we’ll just have to sit back, relax, and wait a whole five seconds to skip some ads.