There Is neither Pine nor Apple in Pineapple Solo Show by Vanessa Donoso López.
Visual ArtsVisual

Opening Night at 6pm on Thursday the 11th of February

MART presents Primes, a new and evolving body of Jason Dunne’s recent wall-based sculptural work. In this exhibition, Dunne uses translucent images of body parts in combination with a wide variety of found objects and materials such as animal bones, wool, iridescent plastic beads and human hair. The resulting amalgamations attempt to articulate hard to fathom aspects of human experience such as emotion, aspiration or awareness of senses. The work can be seen as a response to the privileging of rational understandings of the body. The artist aims to open up a world beyond and beneath the ‘skin’ of the image; subordinating surface appearances and instead visualising through gesture what is normally unseen.

Jason Dunne (Born 1987, Ireland) recently an MFA at Bergen Academy of Art and Design in Norway and graduated from the National College of Art and Design, Dublin in 2009 with a BFA in Painting.

By taking latex casts of various architectural elements of No. 8 Dawson St, the artist interrogates the aesthetic tropes of the building. Built in the 1700’s, the building is laden with neo-classical motifs and ornamentation. Re-hashed Grecian-style columns imbue a sense of permanence and stability. After being cast in latex, they become flaccid and fatigued. 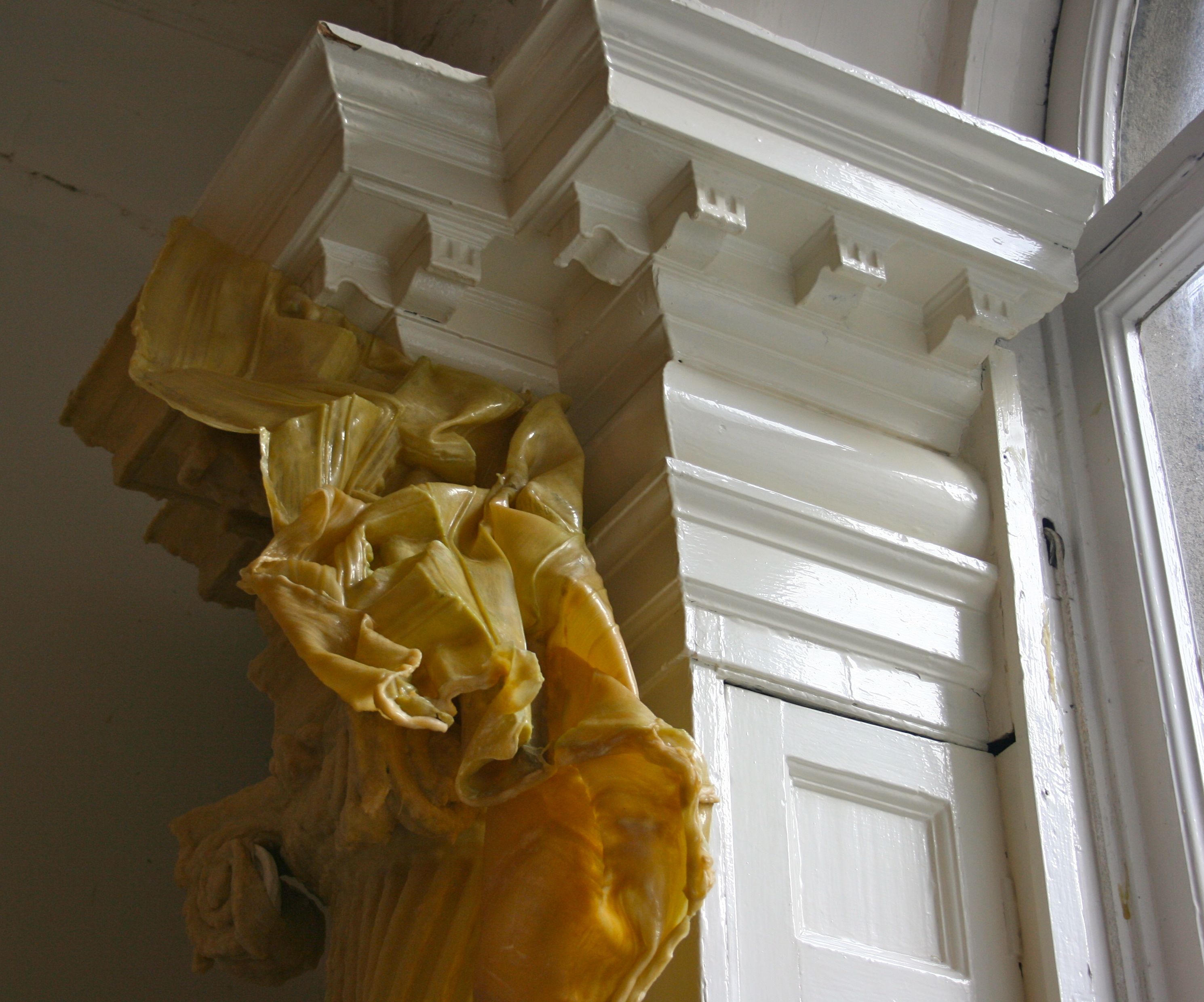 “My work seeks to undermine and subvert heroic monumental architecture and sculpture.Historically forms such as obelisks, columns, plinths, pyramids etc are embedded in an aesthetic language of power and control. Re-imagined here, historical fragments become precarious totems to a faltering empire; their potency suffused with frivolousness and flippancy. Serious and somber whites and greys are contaminated with bright lurid pinks, yellow, oranges and reds, representing the gaudiness and synthetics of consumer capitalism. Precision and exactness are disrupted with playfulness and pleasure and the monuments are denied their heroic autonomy. Consequently, they embody the ambivalence of our current time. This ambivalence is portrayed in the going ‘back to basics’ rhetoric, yearning for a simpler time and for the seemingly timeless ideals of history instead of the confusing and chaotic values of our contemporary ‘synthetic’ and ‘illusory’ culture. Exposed is the quixotic desire for the sacred”.

Irish artist Jesse Jones continues the gallery’s 2016 theme of Artist as Witness, in her new work entitled No More Fun and Games. The artist transforms the gallery space into a cinematic experience through sound and architectural interventions. She has commissioned a new composition from renowned American film composer Gerald Busby, who created the score for Robert Altman’s 1977 film 3 Women. In her installation Jesse Jones turns our attention to feminism in Ireland, exploring how individuals share, understand, or experience collective memory. Working with a collaborative curatorial team to create a Feminist Parasite Institution within the exhibition, she explores how art by women has been valued historically. A series of workshops, performances, tours and writings address the question of gender equality in the construction and commemoration of history.

There Is Neither Pine nor Apple in Pineapple | The Instituto Cervantes

There Is neither Pine nor Apple in Pineapple is a play on words. This game reflects the way we have to juggle with expression when living in a foreign land rescuing unusual or invented terms. This show translates this circumstance into a multicolored experiment. Foreword by Sean Kissane, curator at the Irish Museum of Modern Art, Dublin.

Vanessa Donoso López holds a studio as a studio member at the Temple Bar Gallery and Studios, Dublin. Her most recent solo shows are Eye before E except after see (Limerick City Gallery) and Daily disagreements over small things (Kevin Kavanagh Gallery at the  Barcelona Contemporary art fair SWAB, Barcelona, Spain). She is currently working on her new solo shows for the SUPERMARKET  art fair with The Ormston House, Limerick, in Stockholm, April 2016 and in the LAB, Dublin, September 2016.

Claire Byrne received a Bachelor of Fine Arts degree from Limerick School of Art and Design and a Masters degree in film direction at Screen Academy Scotland in Edinburgh, Scotland. She is from Dublin, Ireland.

Poem of the Week: St. Gobnait and the Place of Her Resurrection