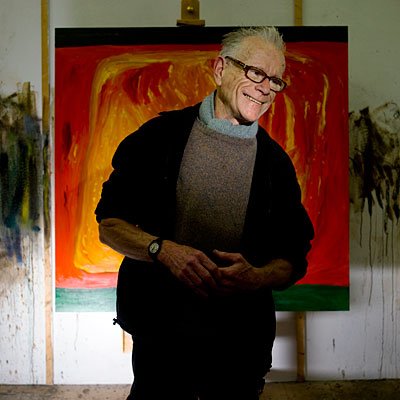 Patrick Hall was born near to both Birr Co. Offaly and Roscrea, Co. Tipperary in 1935 and he says that he made the decision to become a painter aged 22. He saw some paintings, particularly a painting by Georges Rouault in Dublin when he was about 17 or 18 and he describes the experience as being a doorway out of a previous life and into a new one. His family were very poor during his teens and he says that as they were selling off their possessions he felt the need to surround himself with things he thought were beautiful and that could ground him. Seeing these paintings and deciding to become a painter was the one light that he could see out of the tensions and darkness that went with his family life at that time.

He went to England to study at the Chelsea School of Art and then at the Central School of Art in London, where he was taught by the British artist Cecil Collins, whose influence has been a lasting presence in his work. Collins work was originally associated with the Surrealist movement but his later works are very much influenced by German Expressionism and filled with spiritualism and allegory. Some look almost medieval in the depiction of angels and biblical scenes but the influence on Hall is clearly identifiable.

After moving to Spain in 1966, Hall didn’t have much money and going to the Prado was a way going into a warm environment where he had paintings to look at, so that, in a way, the Prado was his University. He lists a myriad of influences including painters he saw in the Prado such as Velazquez, Goya, Titian, and Bosch. Writers, poets, music, history and the landscape all influence his work but he marks himself as a solitary artist, not influenced by his contemporaries. He talks about painting being a solitary experience and the isolation is part of his work and part of his life. He references Caspar David Friedrich’s work and its sense of isolation, likening this sense of being on the edge of the ocean, as he is in Sligo, to the process of painting and anticipating the journey ahead.

Hall returned to Ireland in 1974 and began exhibiting with the Independent Artists Group, a loose association of artists that also included painters such as Brian Maguire and Patrick Graham.

Religion is an important aspect of his work. His father was Protestant and his mother Catholic so he felt it put him at the edge of society, since this sort of mixed marriage was uncommon and looked down upon in Ireland in the 1920s. Being an artist naturally set him to the edge of society as well, so it may have been an easier step for him to take than for most. The subject matter of both paintings and of much of Hall’s other work of recent years is drawn largely from the Bible, a book that Hall considers to be rather like a great painting

The stone plays a central role in many of his works. In some works it is almost abstract, then appearing as a sort of skull, a mountain, then a very gigantic mountain, oscillating between very small and very big. There are very gigantic stones, which are burning mountains, and then there are tiny stones. Hall says he sees everything as being made of stone, the heart, people, buildings and it was the fundamental material that the alchemists used in their processes as a metaphor for the human psyche. Stone gets worn down by drips of water over the millennia and the human psyche is worn is a similarly slow manner by the drip of life. He references the Greek gods retreating to the mountains and the stone at the tomb of Jesus, closing and opening, as he says, stone is everything.

Seastone is interesting in this respect with its play on words and reference to the tomb of Jesus. The painting depicts a large green speckled rock with an eye on it. Around it floats flower-like shapes and it seems to be growing pieces of sparkling coral. The dark foreground makes it seem as though the stone is emerging from or even floating on the sea. The play on words in the title seems a deliberate attempt to draw attention to the stone as something of importance, the all-seeing eye that could be linked back to God. And perhaps the stone floating on the sea could be a reference to Jesus walking on water. Seastone itself (also known as Jasper) was a favourite gem of the ancient world and its name can be traced back in many languages including Arabic, Persian, and Hebrew.

Hall’s earlier painting, Marsyas 2, is interesting in that it comes from Classical Greek mythology rather than religion. The story of Marsyas, who is a satyr, starts with Athena when she abandons her double flute (or aulos) after being mocked by the other Gods for the way her cheeks bulged when she played it. Marsya picks it up and he challenges Apollo to a contest of music and when he loses, he loses both his hide and his life, he is skinned alive and the hide nailed to a tree. Marsyas was apparently admired for his intelligence and self-control, not something that most satyrs possessed, and his death was mourned so profusely that the mourner’s tears created the river Marsyas.

The Romans later took on Marsyas as the inventory of augury (or fortune-telling) and as a proponent of free speech. A statue of him stood in the Roman Forum and was regarded a symbol of liberty, where the plebs would gather for demonstrations and where protest posters would be put up as on a kiosk.

The contest of Apollo and Marsyas is seen as symbolizing the eternal struggle between the Apollonian and Dionysian aspects of human nature. Hall says of the work, ”This myth represents the challenge between the individual and authority, the divine and the human. It entered into the process of painting at a certain stage after the painting was in train. It’s like Leonardo says, ‘you paint first and then you judge, the intellectual act comes after the act of painting or illustrating an idea’.”

This is part of a series of ten works called ‘The Flaying of Marsyas” (inspired by Titian’s series of the same name) that were exhibited in Temple Bar Gallery in 1983. Hall started the series in Ireland and completed in New York while on residency there. Apparently he was very enthusiastic about Temple Bar Gallery comparing it to the New York galleries in Soho that had once been warehouses for the rag trade. He said you had to pick your way over the trash cans outside but on the inside they were like Arab palaces, whitewashed and high ceilings, dungeons from the outside and like jewels in the inside.

Hall’s work is widely regarded as fundamental to the so-called return to painting in this country in the 1970s and ‘80s. He has been an influential figure in the careers of many younger generation artists, including William McKeown, Nick Miller and Isabel Nolan. He has exhibited widely both in Ireland and internationally. Solo exhibitions include the Douglas Hyde Gallery, Dublin, 1995; Butler Gallery, Kilkenny, 2002; Green on Red Gallery, Dublin, 2004, and the Model Arts and Niland Gallery, Sligo, 2006.  His works are included in many private and public collections including the Arts Council of Ireland, Dublin City Gallery: The Hugh Lane and the IMMA Collection. He was appointed a member of Aosdána in 1982 and currently lives and works in Sligo and Dublin.